Over the weekend I got a very special gift.  It was a gift from my grandparents on my dad’s side.  I am calling it a gift because my grandparents are still alive.  About a year and a half ago, they entered a nursing home together.  They both needed help and were just not able to help each other, so my granddad decided that was for the best.  My grandparents lived on a farm in Kincheloe, WV for many many years.  It is where they raised their family, and some of their children have raised their families there too.  It is way out in the country on the border of Harrison and Lewis County.
Anyway, the house they lived in is in the process of being cleaned out by my dad and his brothers and sisters.  Because my grandparents won’t be going back there.  I guess the process isn’t quite so sad because they are both still with us.  But I am sure there is a sadness about it anyway.  Since I am writing about this gift I received from them, I wanted to take the time to tell just a little about them.  My grandparents are two of the very best people I have ever or will ever know.  When I was growing up I spent a lot of time out there with them on the farm, and they are some of my most favorite memories.  They had a horse that they would let me take rides on.  They raised cattle.  They had huge gardens.  My grandmother was actually run over by a tractor when I was little and lived to tell about it.  My grandfather worked in downtown Clarksburg at a store called Palace Furniture, and it had probably 4-5 stories.  I used to go there and ride the elevator from floor to floor.  They attended this tiny church out in Kincheloe that actually still had an outhouse when I was little.  I remember my grandmother singing songs with me and reading to me.  They were just good, simple, god fearing people.  And I love them so much.

A couple of months ago my parents called and told me they were cleaning out their house, and asked if I would like to have their grandfather clock.  I thought to myself it probably doesn’t go with my décor or what I have planned for décor, around here.  But of course that was only a fleeting thought and I said yes I wanted it.  Because it belonged to them.  Because sometimes it doesn’t really matter if it goes with your decorating style.  Sometimes what matters is that you got something that belonged to two of the people you love and admire most in this world, and it is being offered to you, and of course you want it!  I will keep this clock for the rest of my life, it will go with me wherever I live.  And one day I will pass it on to one of my children, and they will want it, even if it doesn’t match a thing they own.  They will cherish it just like I will.  They are already arguing over which of them will get it!  Mr. 12 year old is the most enamored with it.

The clock is over 6 ft. tall, and I believe it is oak.  I put it in my living room because that is pretty much the only place I could fit it.  Here it is.  There are several pictures, but not too many.

This is it in the back of my dad’s truck. 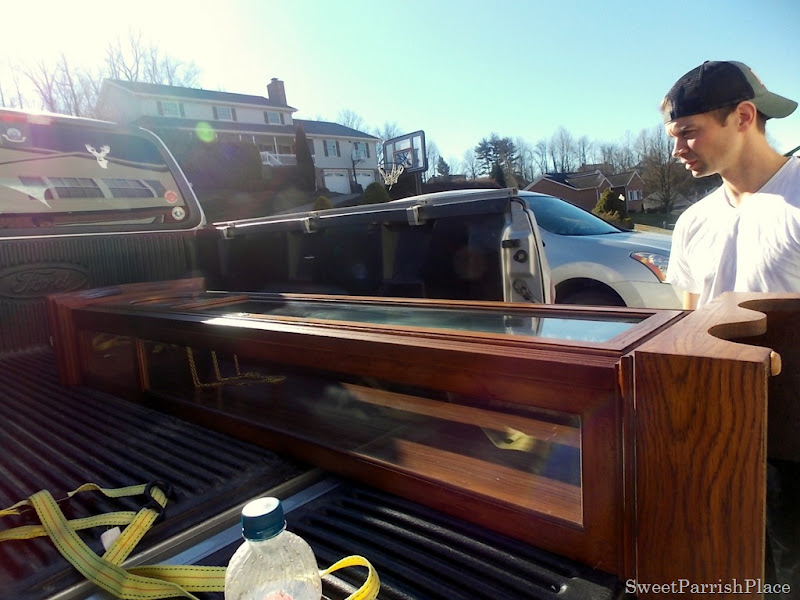 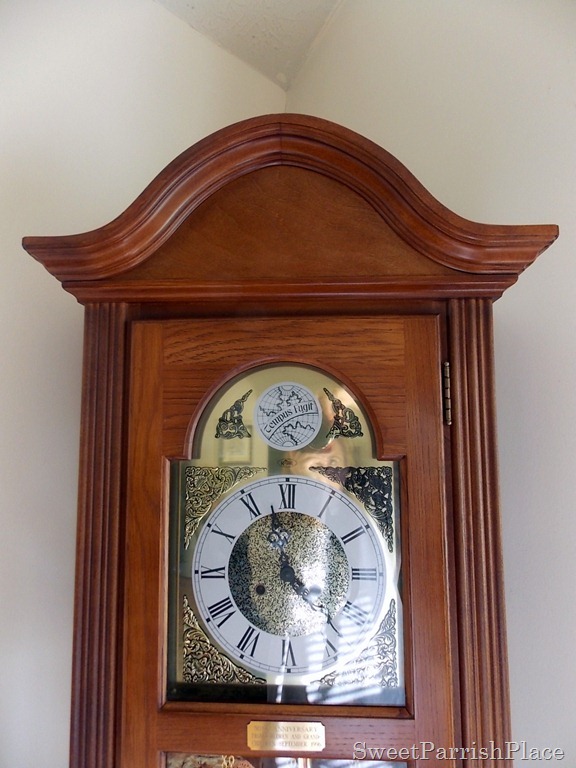 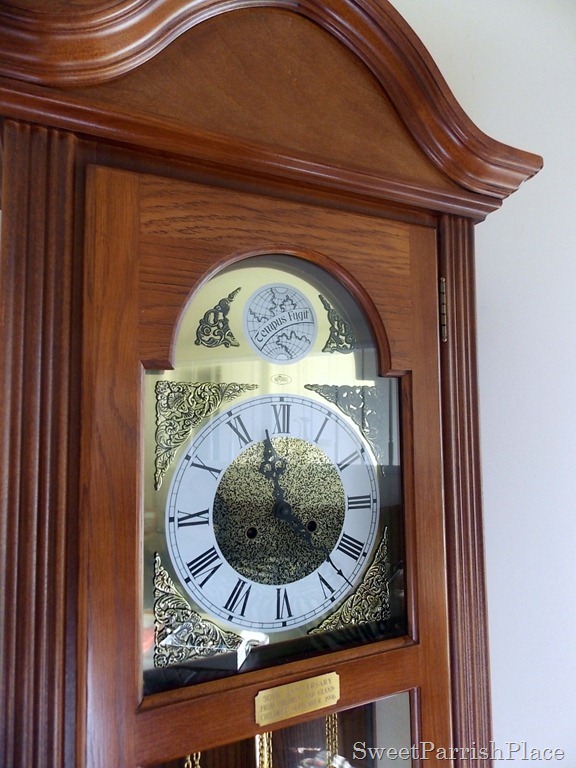 This clock was a gift to my grandparents on their 50th anniversary in Sept of 1996.  Fitting, because this house we moved into was built in 1996! 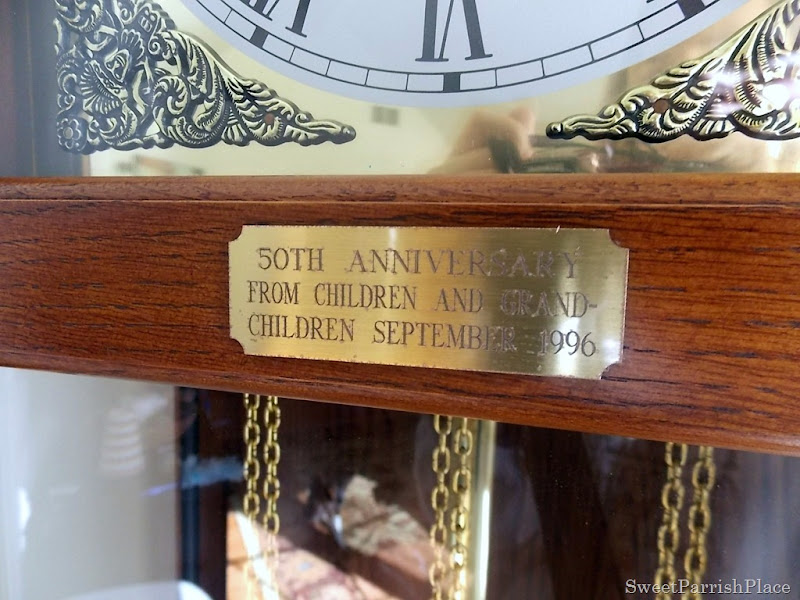 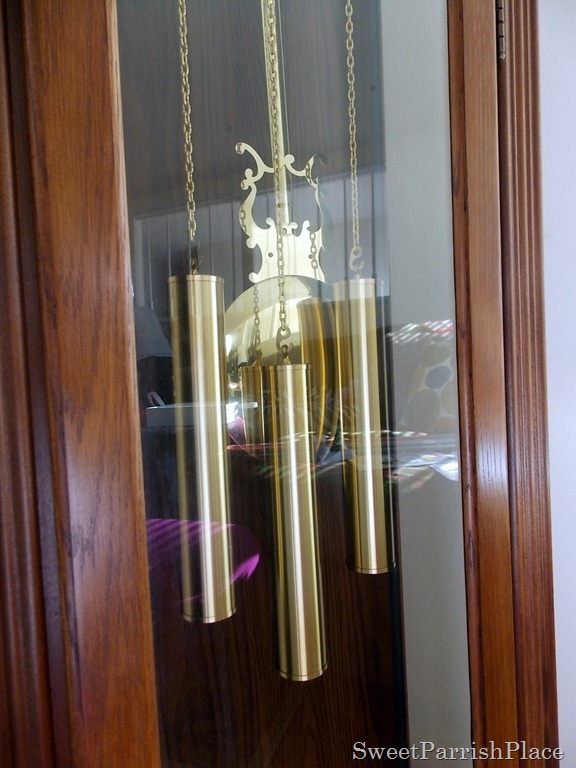 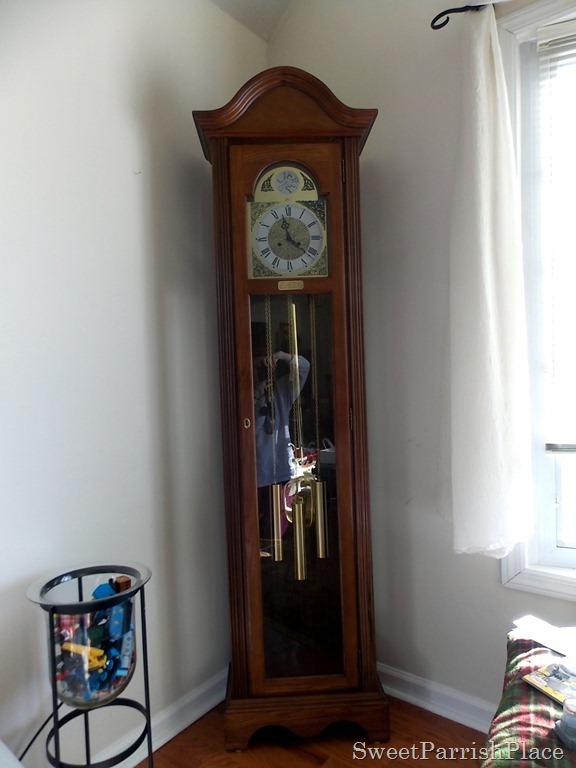 This is the way I rearranged my living room to fit the clock in.  I actually like the change. 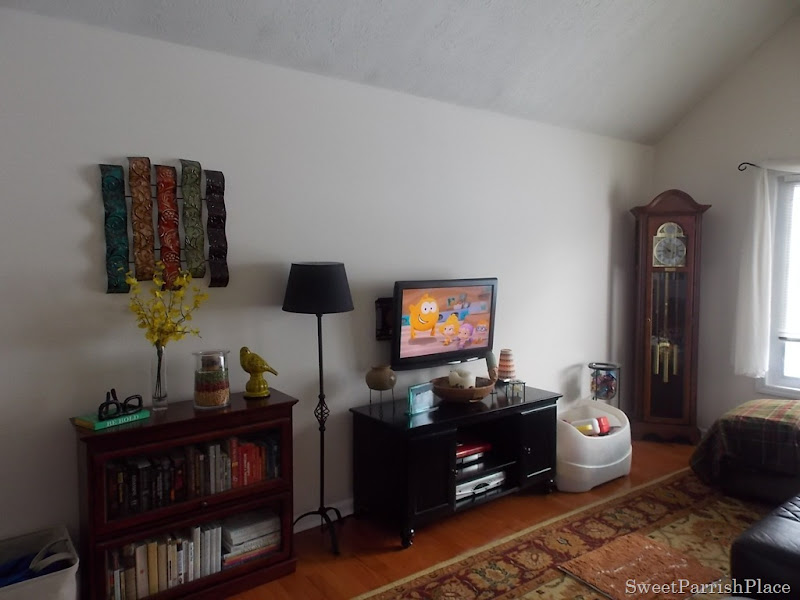 I am so glad to have this piece of my grandparent’s lives.  It is very special to me.  The gonging sound is not nearly as disturbing as I thought it would be, it is very subtle.  We haven’t gotten it working exactly right yet with the gong, but we haven’t had the time to spend on it.  We need to google it and learn how to maintain it.  It fits in with my décor better than I imagined it would.  Although this is the room in the house that is probably going to be changed up the most.  The walls and ceiling are to be painted over the summer, and I am hoping for some new furniture in here too.  You can see some of the sofa’s I like in this post.  You can also see my entire living room here.  I am considering ways I might make this clock my own without permanently altering it.  Maybe putting a paper or fabric backing on the back wall?  One that is adhered to a piece of heavy cardboard or something that would just kind of sit in there and could be pulled out and changed.  What do you think?

I linked up here: