I hope you had a safe and good weekend!  I spent Friday night glued to the TV watching CNN, and was so happy that they captured the bombing suspect alive.  I am still praying that he cooperates fully, and that Boston, and America gets the answers they need and want.  In case you do not know this, I am a school counselor in a middle school.  I have listened to so many friends and family members talk so well about this 19 year old boy.  It seems that they cannot imagine him doing something like this.  Maybe my educational and career background are the reasons why I am so interested in reading and watching everything I can find about him and his brother.  I just really hope that we find out what made such a seemingly nice, good, popular person turn to this kind of behavior.  It fascinates me.  And my heart and prayers still go out to all of the people who had friends or family members who were affected by this horrific act of violence.
We had a busy weekend, as usual.  That is kind of how it goes when you have three children.  We took Miss 17 Year Old to attend a concert in Pittsburgh on Saturday.  We did not attend, so we had an opportunity to spend some alone time together in one of our favorite cities, which was nice.  We shopped, had sushi, walked around (although we were freezing, brrr) and sat in a Starbucks and watched the passersby in the theater district.  We enjoyed our day, but it was so late by the time we got home, we conked out!  Sunday, Miss 17 Year Old played powder puff football for charity, that was fun to watch as well!  The boys were the cheerleaders!
Spring is definitely happening in West Virginia, thankfully!  So last week it was time to get started on yard work!  My husband mowed the grass for the first time last weekend.  We moved into our house last June, and there are so many things we want to do outside!  There was one tree and bush in particular that needed removed completely.  When they were planted, they were placed too close together, and they were squeezed in and all dead on the insides.  We wanted to remove them and plant a pink dogwood tree.  So my dad came over and helped LC one day last week.
Speaking of pink dogwood trees, they are my most favorite trees.  I have to tell you about the one we had planted at our previous house.  We planted it the summer after we moved in.  It was a whole family occasion and we named her Pink Panther.  WE have pictures of the kids helping plant it and standing next to it.  Over the years it had grown and was prospering.  Every family picture was taken next to this tree.  When we moved, I wanted to dig her up and bring her, and I thought I better not because the new people might be mad.  It was the perfect tree in the perfect spot, and I remember thinking how I could not wait to drive by that house some day years from now and see how she had grown.  Well, guess what?  The people who moved in tore her out by the roots and burned her!!!!  Talk about angry!  I was soooooo mad!  It makes me so angry all over again just writing about it.  Why on earth would someone do that to a beautiful tree?  It was the only tree in the entire front yard!  I can’t even drive by now without mourning the loss of Pink Panther.  If only I would have brought her with us.  Sniff sniff.

Anyhoo, we got another pink dogwood, and here is the story of her arrival at Sherwood Ave.  I apologize for some of the poor picture quality.  I was at work during this process, so I begged LC to take some pictures of this process, and he used his cell phone instead of the camera, men!

These are the two sickly shrubs.  One was a pine tree, I don’t know what the other one was, but on the insides where they had grown together, they were completely dead. 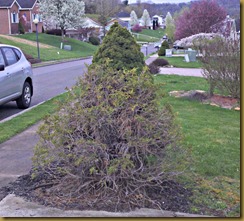 Basically, LC and my dad tied a chain around the shrubs, and attached them to dad’s truck and they popped right out!  They were completely finished and on the way to dispose of them in under an hour!

Next came the dogwood.  I told LC to plant it back a little more from the sidewalk and driveway.

This is after he planted it.  We plan to remove more soil behind it so that it will look centered.  And we will mulch around it.  We are waiting because LC plans to mulch all of the landscaping at the same time.  Dark brown mulch.

Just a little close up of the leaves.  It won’t bloom this year, maybe not even next year, but one day…

One of my other favorite things to put out in the summer is ferns.  They are virtually indestructible, and I love the way they look.  In our previous house, we had a front porch, and I would hang two every year.  This house doesn’t have a front porch, so I decided to buy something to put the ferns in on the stoop.  LC picked up the ferns and the tree at Home Depot, BTW.

Here are a couple of other shots of the ferns.  We just filled the planters will fill dirt because they were too large for the ferns, and then we sat the ferns down in in the containers they came in.

The shutters were a sea foam green when we moved in, but they were badly weathered.  The front door was brand new and it was just white.  The wreath on the front door was a gift from LC about 6 years ago.  I am not liking it anymore, so I plan to change it.  See the light to the right?  It is so faded and old looking.  I plan to try to take all of the outside lights down and spray paint them.  Another thing on our agenda is to scrape the hand railing and give them a fresh coat of white paint.  They are all chippy.  I also plan to put lots more flowers out and about, but I always wait until after Mother’s Day.  Going and buying all of my flowers to pot is always my Mother’s Day gift.  I can’t wait to flower up the front and back deck.  Last summer we were too busy moving to have any flowers outside.  Oh, there is photo bomber Bambi.

This is our house!  With the painted shutters and door!  See the pond behind the house to the left?

Here is another tree in our front yard.  We have no idea what kind of tree it is, but the leaves are a Burgundy in the summer, not green.  I had no idea it was going to have flowers on it until it bloomed last week.  Anyone know what kind of tree this is?

I could not resist showing you this gorgeous magnolia tree I saw last week while out walking.  I don’t see these in this area very often.

We have so much work to do, but we enjoy making our home look as good as possible and improving it’s curb appeal.  LC plans to power wash the deck next weekend.  That will be a job!  What are your plans to do outside of your house this summer?
I am linking up here: