This is a step by step tutorial for how I created my faux painted subway tile in our kitchen. 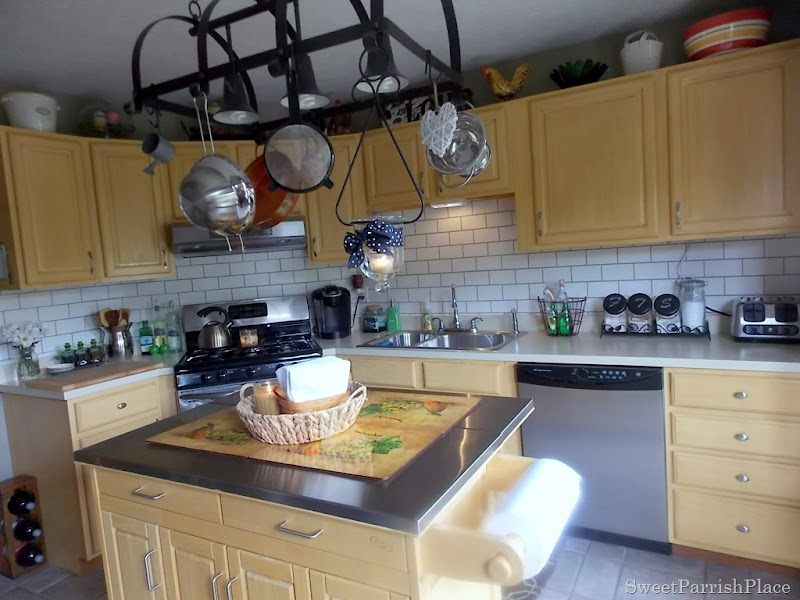 I hope you had a great Mother’s Day yesterday, and that you got spoiled for the day, just a little!  I had a pretty good day, with breakfast, some delicious dessert, and my favorite pizza.  All in all it was a low key and relaxing day, just what I needed!  Today’s post is all about my Faux painted subway tile.  I have a full tutorial for you that shows you step by step how you can create one for yourself!

I revealed my painted backsplash back on April 30th, and I am finally back today to give you a full tutorial on just how I did it!  Above is a picture of the finished product.  This project was very cheap!  I bought  a quart of paint, which I used on the tiles, and the trim in the kitchen and dining area, and I still have plenty left over.  For the grout lines I used the same paint I used on the walls in the kitchen and dining room.  I will tell you right up front that this took me a lot of time.  It was very tedious and took a lot of patience and a steady hand.  I spent way more time on this than I did money.  I am estimating that I spent at least 20 hours on this, working on it in my spare time, and LC helped me with 4 of the 5 sections.  And I used at least 2-3 rolls of painter’s tape.

Update- 2/6/19- We have since made over this kitchen, but we kept the faux subway tile backsplash, and it has held up perfectly!  Here is a sneek peak!

Supplies you will need to create the faux painted subway tile:

2-3 rolls of painter’s tape
high gloss paint for the actual tiles ( I used Behr Premium plus in crisp linen white- high gloss)
eggshell paint for the grout lines ( I used Behr Premium Plus in garden wall- eggshell)
A long level
A yardstick
A pencil
Something to use as a spacer ( I swiped used one spacer that people use on actual tile, come on, it is just a tiny little piece of rubber, and they come in bags of hundreds or so, don’t judge me!)
An actual subway tile ( I just purchased one from Home Depot)

How to paint the Faux painted subway tile :

The very first step is to paint the entire backsplash area in the color that you want your tiles to be.  We went with Behr Premium Plus crisp linen white in a high gloss.  Next, you will do the horizontal lines.  I divided up my backsplash into 5 sections, and completed one section at a time.  It made it seem a little less daunting.  The first thing you will do is choose what pattern you want to use.  I just used a traditional pattern.  I started from the bottom left.  I held my actual subway tile up on the wall and marked it off with a pencil by drawing a short line above the tile.  Then I used a yardstick and a level to draw a long line going across the entire section.  After I had my line drawn, I taped directly under that line all the way across.  Once that line was taped off, I used my tiny spacer and held it up on the wall right above that line of tape, and made a small line, then repeated the same process with the yard stick and the level.  I then taped directly above the second line I had just drawn.  Once I got the hang of this, I found that I was able to get away with using the level and yardstick only on the bottom line, and I could eyeball where the top line needed to be.  It sped the process up a bit.  After I had all of the horizontal lines taped off, I painted.  See the picture below.  This will give you a good idea of what it should look like when you are starting.  Be sure to peel the tape off immediately after you paint those horizontal lines. 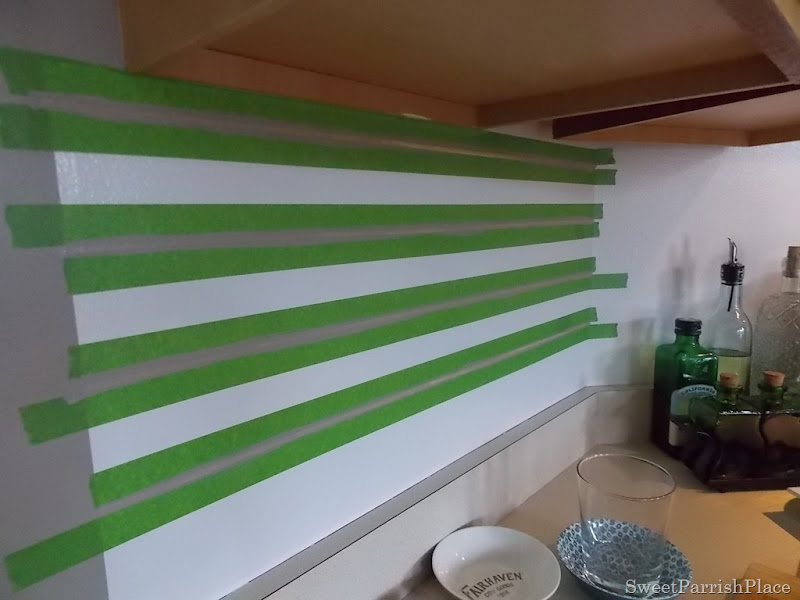 Now, I want to point out a mistake that I made that made things a whole lot more difficult for me.  Look carefully at the picture below.  Do you see that bottom horizontal line?  I had intentions to sit the actual subway tile directly on top of the backsplash, so there would only be a grout line right above the tile.  I messed up somehow, so there ended up being an inch under that bottom grout line.  That made my job way way more difficult, because I had to repeat it clear across the entire wall.  Anyhoo, you can now see in the picture below that my horizontal grout lines are finished.  I gave them time to dry, and started on the vertical lines.
Using your actual subway tile as a guide, hold it up on the wall in between the top two grout lines, and trace a vertical line along the side of the subway tile, all the way from one line to the other, and tape a piece of tape to the direct left of the line you just drew.    Next, hold your spacer up and make another line from the top line to the line below it, and tape to the direct right of that line.  Once you have your first two pieces of tape for the vertical lines, hold your piece of subway tile up on the wall, covering the right hand piece of tape, and draw another line, tracing down the side of the tile just like you did for the first vertical line you drew.  After that, you will just repeat that over and over until you are finished with that line.  See the picture below at what my first line looked like.  It was all taped and painted in this picture.  I peeled the paint off as soon as I took this picture, and began on the next line. 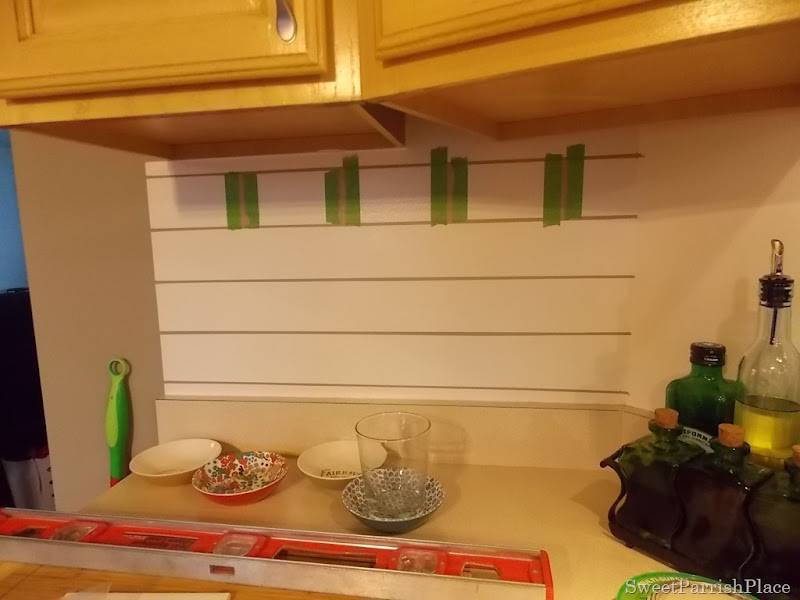 After you have your first row of vertical lines complete, you can use this as a base for your pattern.  Start on the next line right below the one you just completed, and look above at the furthest vertical line to the left.  Hold up your subway tile to the wall, with the middle of the tile being right in the middle of the vertical line above, and draw two vertical lines, one down each side of the subway tiles.  You can see in the picture below, that I skipped a line and taped off and painted the third row down, directly under the very top row.  I quickly figured out that it was quicker and easier for me to just go down one row at a time.  So you can do whatever works best for you, but I recommend starting on the top row and working yourself down row by row. 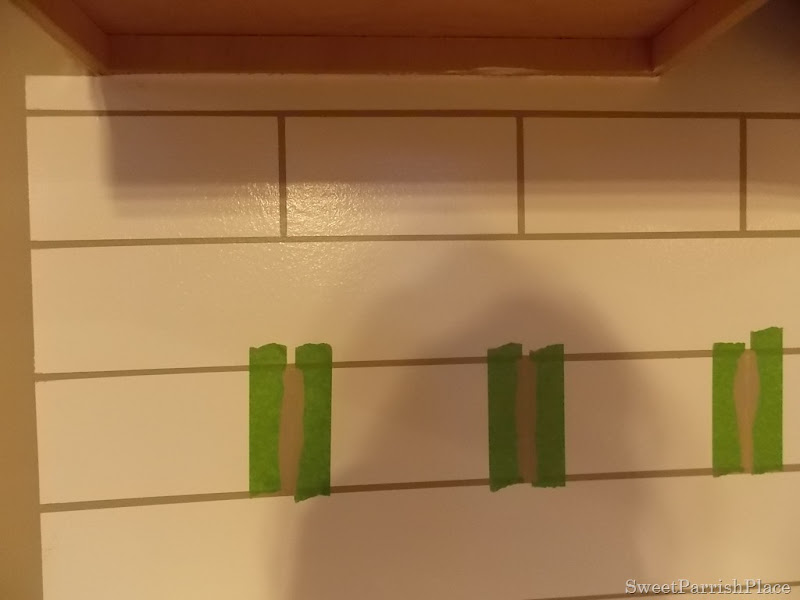 When I completed that very first section I was in a learning curve because I had not done this before. I taped off each vertical line in a row and then painted them, one row at a time. Once I had the hang of things, I started taping off all vertical lines in the entire section before painting. This made things go quicker. You can see in the picture below what one of the sections looked like before I began painting it.  This was all vertical lines taped off, not yet painted.  Please note that you need to take your finger nail and run it down firmly at the edge of each and every piece of tape.  If you get lazy and skip that step you will be sorry, because the lines will not be nearly as crisp.  I used three different kinds of painters tape for this job, Frog Tape and regular blue painter’s tape, and blue painter’s tape with edge lock.  I highly recommend the Frog tape.  It gives a much more crisp line.  When I ran out of Frog tape, I resorted to using regular blue painter’s tape on some of it, and I was sorry.  The lines were not as crisp and I had several touch ups to do.  I then used the blue painter’s tape with edge lock, because when I ran to Lowe’s to get more Frog tape, they were out of the size I needed.  I had much better results with the tape with edge lock, but I still found that my very best result was with the Frog tape.

This is the exact same section as above, after I had painted in between all of the tape.  I immediately began peeling off the tape. 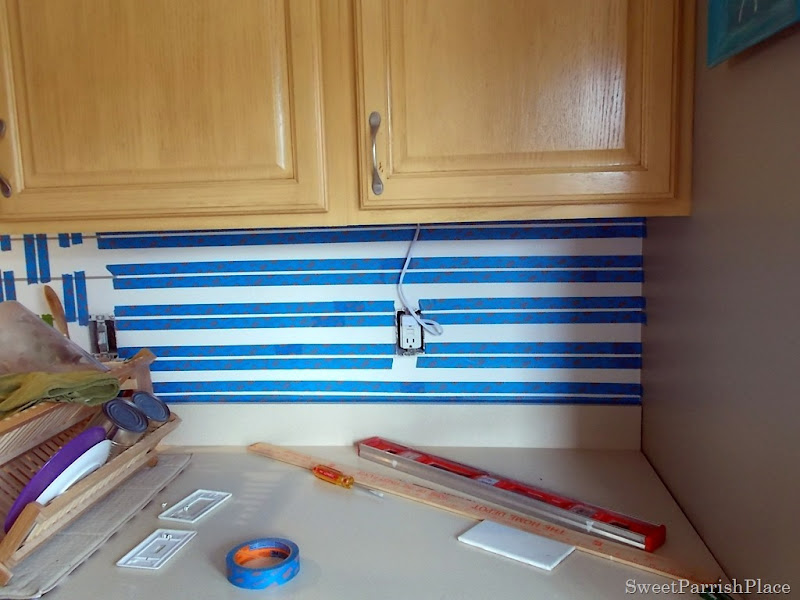 This is a shot of both sections right before I began painting the vertical and horizontal lines.  Again, I immediately peeled all of this tape off after painting. 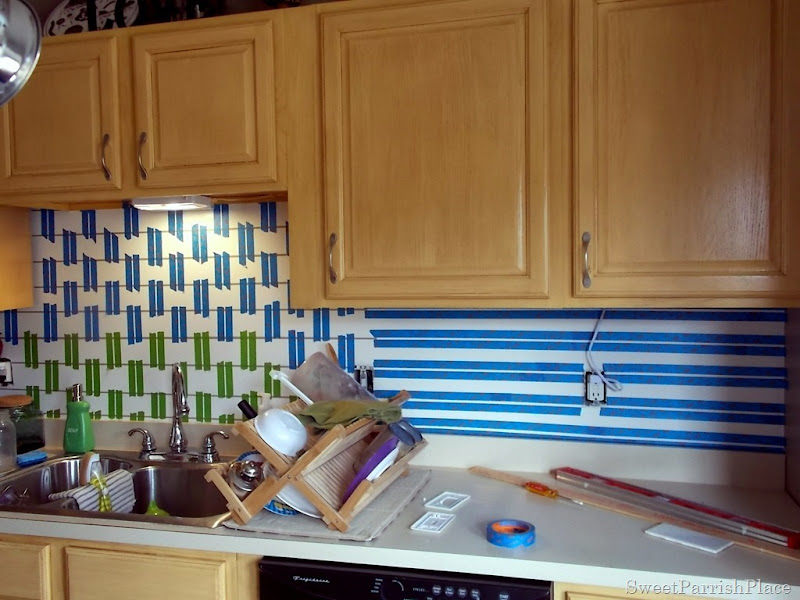 This is a finished section. 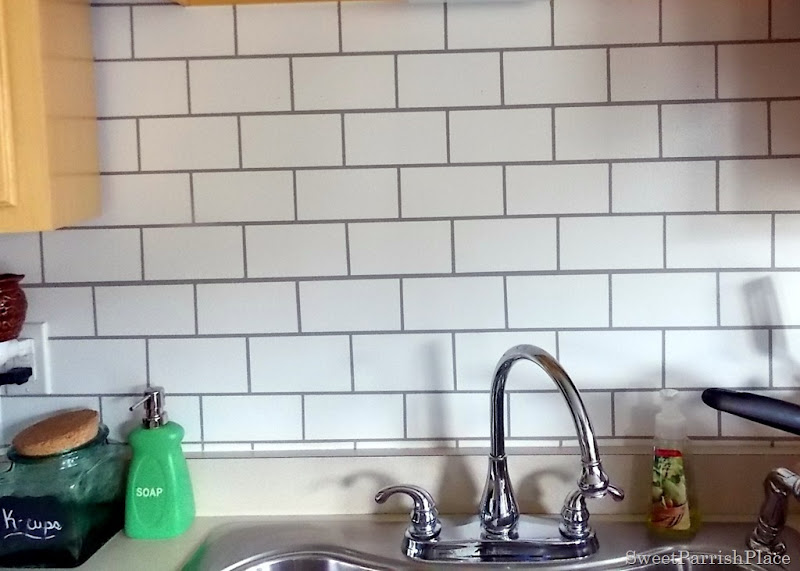 And this is a picture of the entire wall, this is four sections.  There was one small section on the opposite wall to complete after these were done. 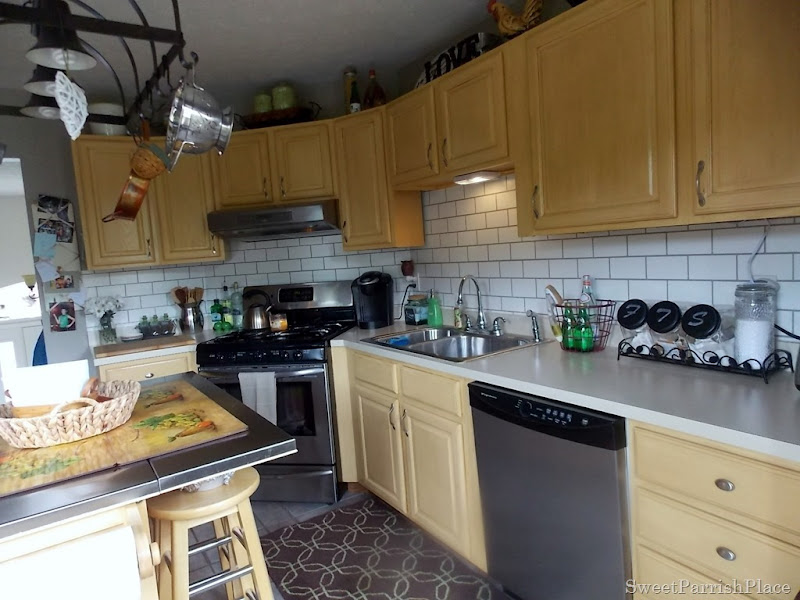 So, did you get all of that?  I hope I explained it well enough!  If you have any questions about this process, please feel free to ask me in the comment section below, and I will be sure to answer.  You can see more pictures of the faux subway tile painted backsplash here, here, and here.
This project is one of my best DIY accomplishments, and it has been featured on quite a few different blogs that I read!  You can check out all of the blogs I have had this project featured on here.   The was a long time finishing it, because I work full time and have three kids and had to do it is my spare time, but in the end, I am so happy with it!  I absolutely love it, and everyone who has visited my home has raved about it.  When you run your hand across it, it has a textured feeling, because I used a high gloss on the tiles, and an eggshell on the grout lines.  So it has a slight 3D effect, which I love.  It makes it look even more real.

I hope that I inspired you today to try something that you think you can’t do.  I put a lot of thought into this project before I actually began.  I debated back and forth for quite some time about how I would go about it.  In the end, after doing Internet research on whatever similar projects I could find out there, I decided to go with the method I just described above.  I had a difficult time finding similar projects, they seem to be few and far between.  I do have to say that my main source of inspiration for this project came from Sawdust and Embryos.  They paint backsplashes to look like tile for a living!  And they are amazing!  I did not use the same technique they used, because I could not find any painter’s tape that was narrow enough for a grout line.  I also read on another blog that used very narrow tape that when they went to peel the tape off it peeled the paint off right along with it, and they had to scrap the whole project.  In the end I decided to to use the method I used.  And the project was a huge success in my book!  What do you think?  Have you ever taken on a project similar to this?