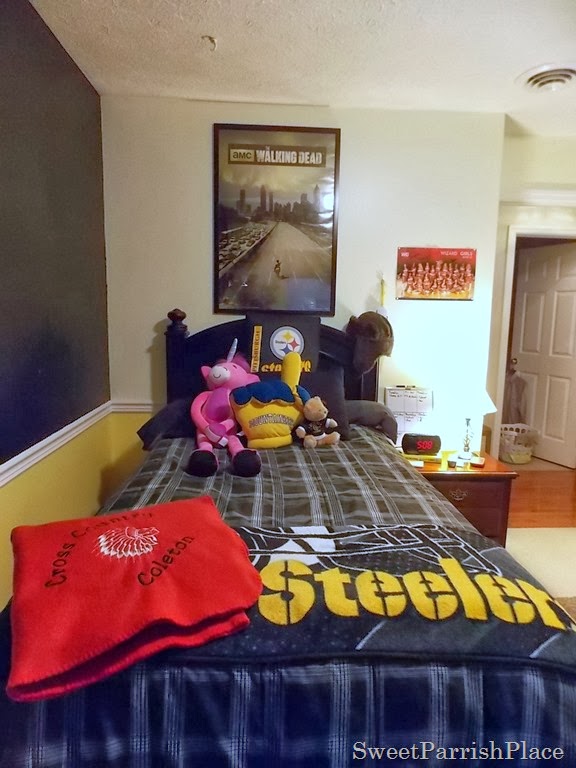 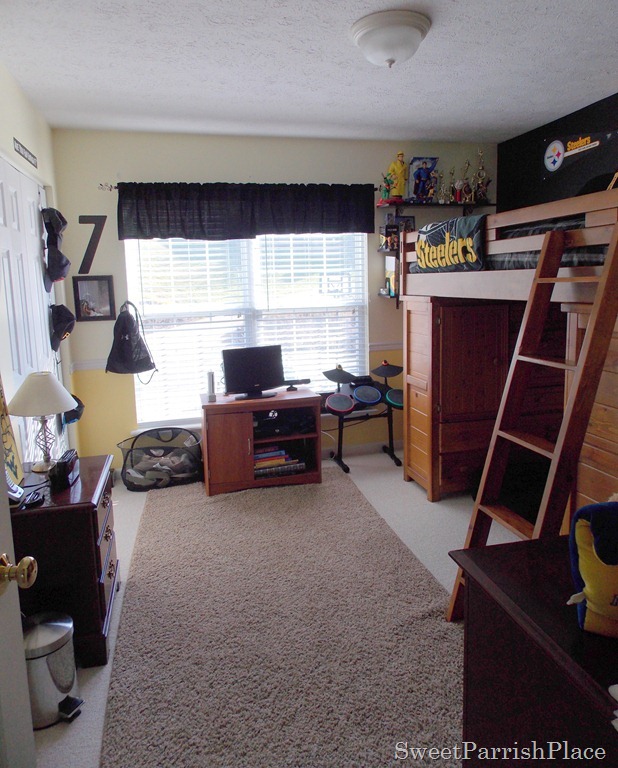 You can see the entire post I wrote about his before bedroom here.  I debated about whether to title this post Mr. 13 or Mr. 14 Year Old’s bedroom because he will be 14 on March 15th.  But I decided not to rush time.
We recently moved the loft bed to Mr. 6 Year Old’s bedroom.  And if you are a regular, I am sure that you have been dying to see what happened to our older son’s room when we took his bed away.  Well, today is the day I am finally showing you!  Some of these pictures were taken before I added a bed skirt.  But that is ok, now you can see how I organized under his bed, which is a must in this house of little storage. 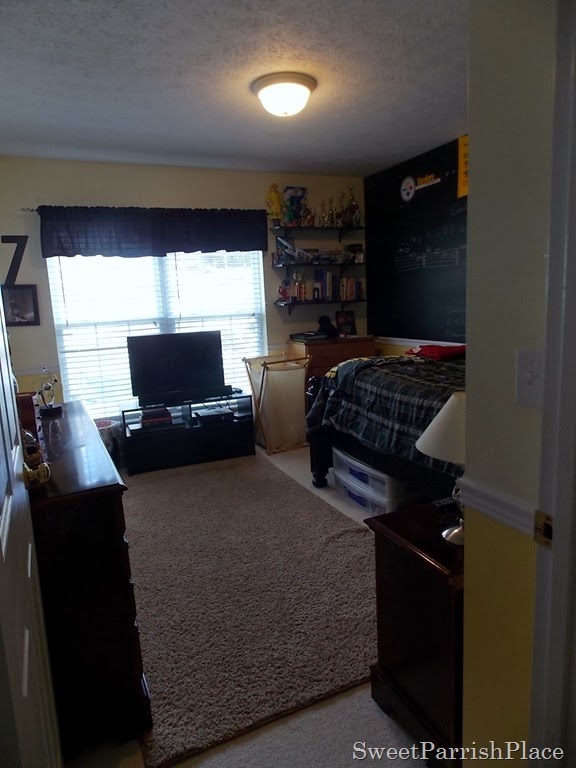 The TV stand is new.  He picked that out as a Christmas gift from his Ma Maw.  The old one went to the Goodwill.  It was falling apart.  The new one is nice and sturdy, and he put it together all by himself!  It has two nice big drawers for all of his X Box games and DVD’s.  The TV and DVD player are also new.  Given to him by his biological father.  I want to insert a sarcastic remark here but I will keep it shut!  You can see the storage drawers under the bed that I purchased from the Container Store.  They hold everything that used to be in his desk.  He agreed to give up having a desk in his new room.  He now keeps everything in these two drawers and does his homework on his bed.  He says it is fine.  The rug is a carpet remnant that I had bound.  It was left over from our old house when we had carpet laid in my daughter’s bedroom.  I am using it here because the carpet is soo light. 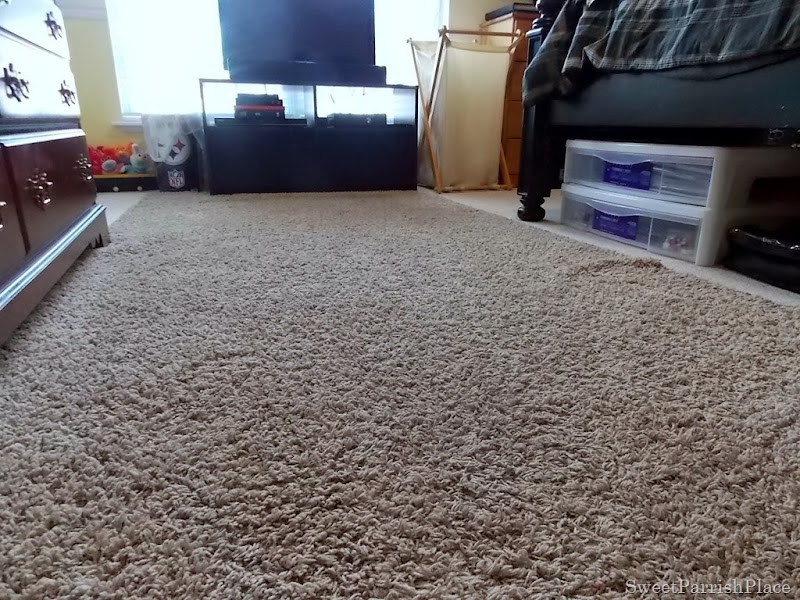 You can see to the right of the drawers under his bed is an under the bed shoe storage.  He has shoes that he doesn’t wear as often here.  And next to that is a collapsible basket that has odds and ends in it. 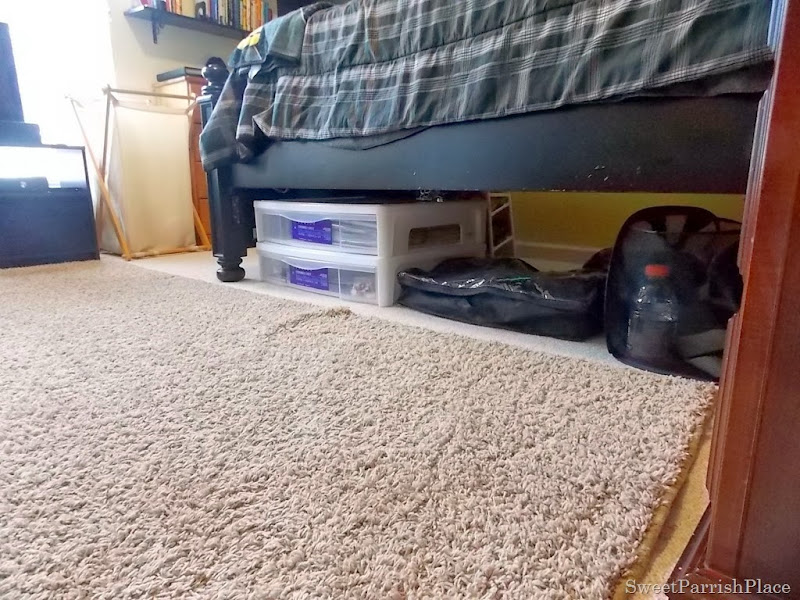 The only wall I painted when we moved in was this chalkboard wall.  It usually has stuff drawn on it, but he cleaned it off when we were working in here.  I am sure it is back to normal now!  He wanted this wall to be clear so that he could draw on it.  The rest of the room is two shades of yellow.  These walls are on our list to paint.  He is done with the yellow Steelers colors.  He still wants a few touches of Steelers, but he doesn’t want a full Steelers room any more.    In this picture, we finally have a bed skirt.  And BTW, the bed was given to us by some good friends.  I knew they were getting rid of it and offered to buy it.  They said we could just have it!  It is a very solid good quality bed too!  We were so excited! 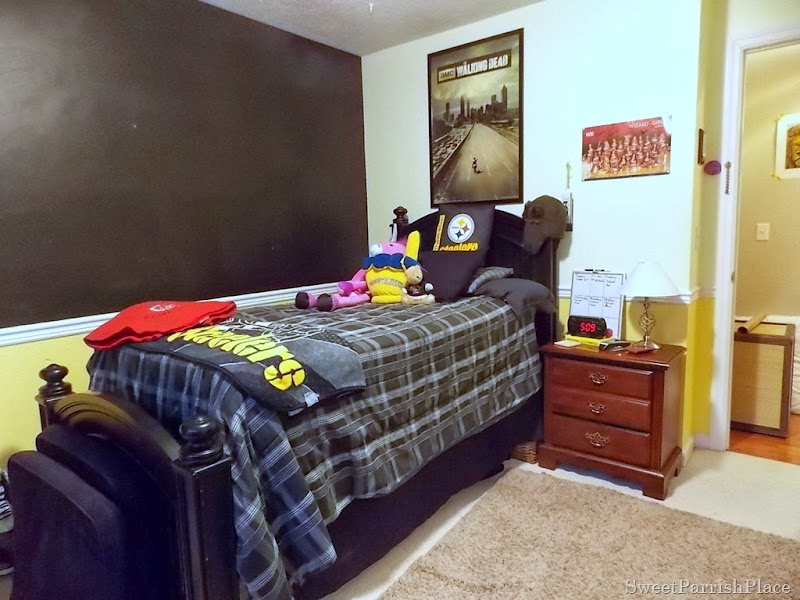 The Walking Dead is his new jam!  The poster over his bed is another Christmas gift, and his favorite thing in the room. 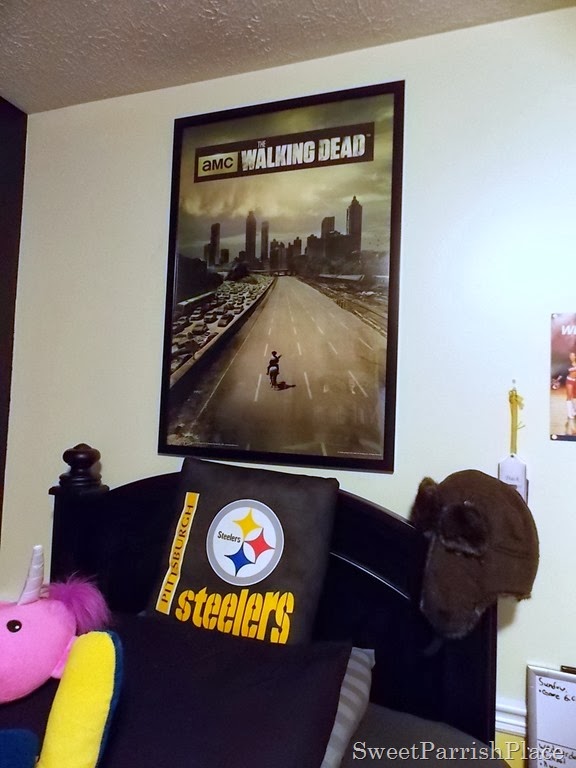 We still found a place for one terrible towel, and these little stuffed animals, which he refuses to get rid of.  Go figure!  But they are hidden behind the door.  Which is always shut and locked.  I guess 13 year Old’s have lots of private stuff going on, (I don’t want to know) because this is where he spends most of his time!  All the medals are from cross country season’s past. 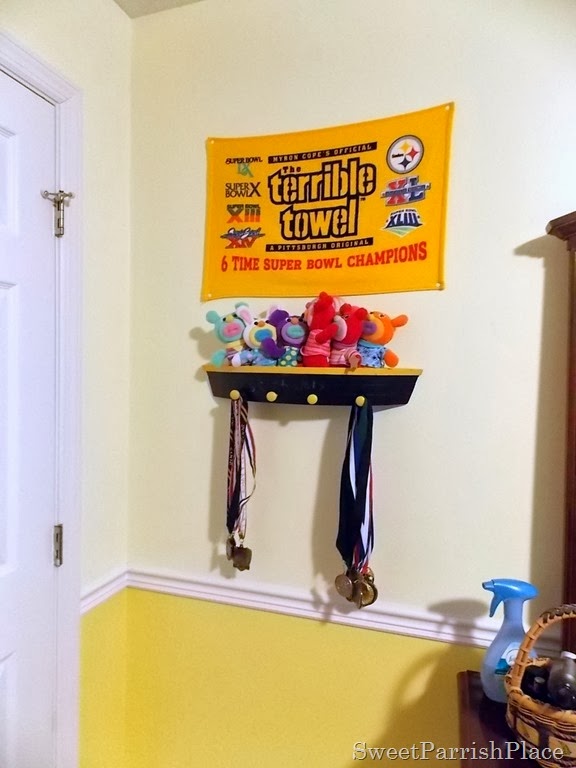 The dresser and night stand in here are just two more pieces of furniture we own that I want to make over.  These were both part of my very first bedroom set.  The sword hanging over the dresser was LC’s and he gave it to him.  It has been sitting in his closet, but he wanted to hang it, so we bought him the sword hanger for Christmas. 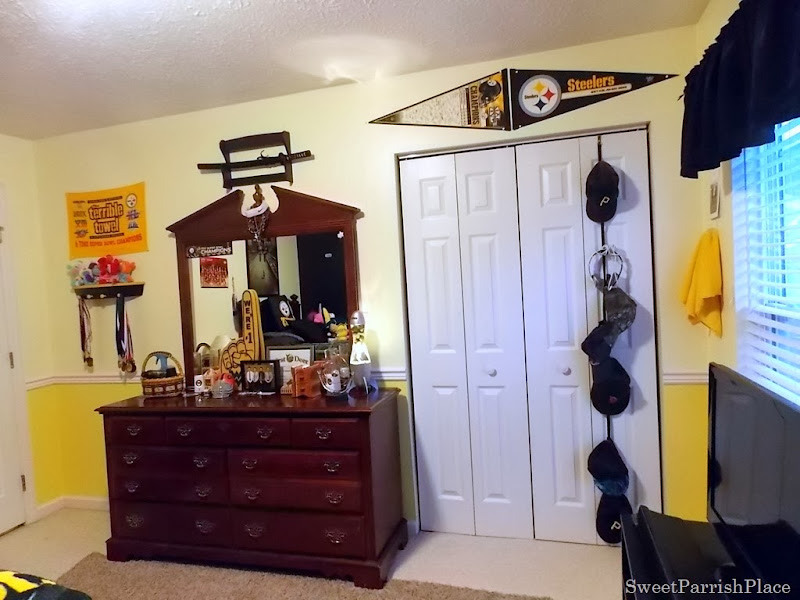 This small dresser came from Mr. 6 Year Olds’ bedroom.  Yes, I want to paint it.  The shelves are cheapos from Lowes.  I would love something more substantial here, but at least it is all up off the floor!   On top of the dresser is where he keeps his school stuff and his calendar.  You can also see where he keeps his shoes in the bottom of this picture.  He needs a shoe storage solution.  His closet is too full for his shoe collection.    I hate the storage space in this house. 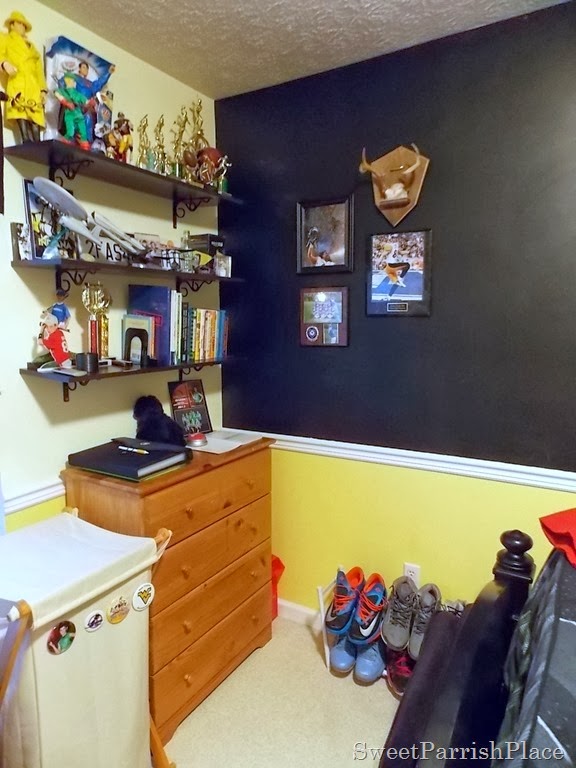 And this little gallery wall is the only thing on the chalkboard wall.  It has the antlers from the first deer he killed, two autographed Steelers photos that he does not want to part with, and an old baseball picture that he wanted to keep. 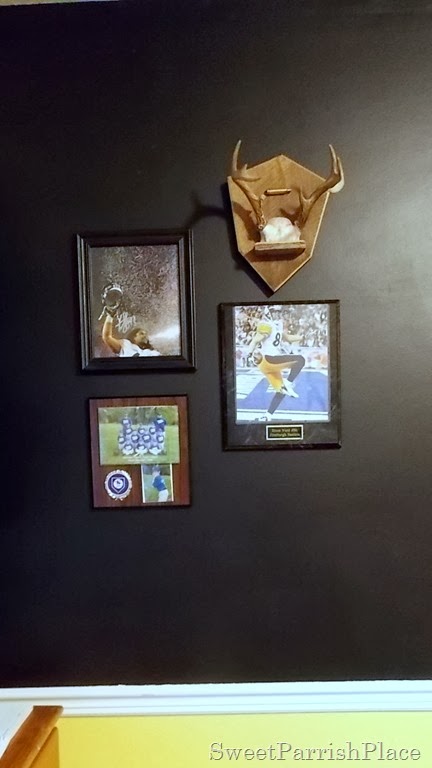 My children’s bedrooms are not designer perfect.  I think they are pretty typical bedrooms for kids.  I think their bedrooms should be their own spaces.  They should have a say in what they look like.  Mr. 13 Year Old is very happy in this room.  It is a small room, and it is tight, which is why he chooses a twin bed.  He could have a full size bed, but then he would not have any floor space, and he likes to have friends over to play video games. 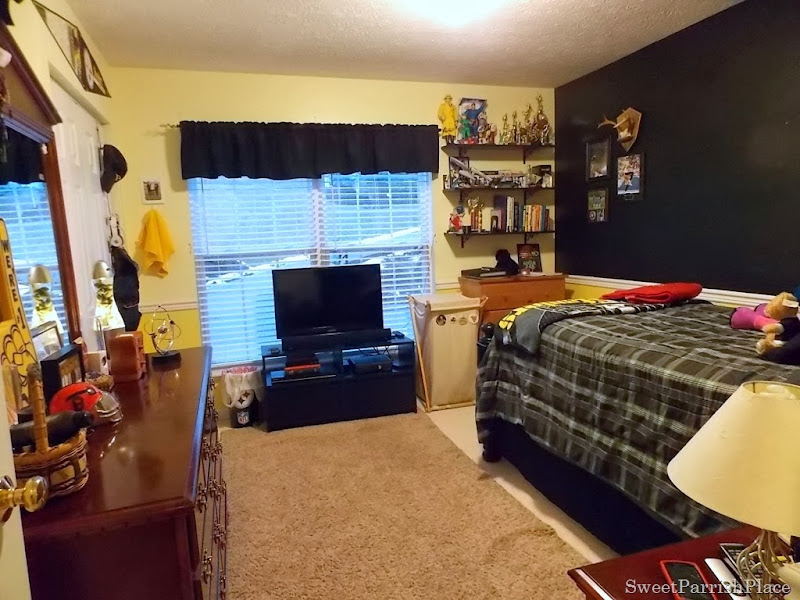 Two things on the list for this room are to paint the walls, and to hang new curtains.  These valances were bought at the same time from Target, and when I got them home and hung them, they were different lengths!  At the time we were moving in, so I kept them.  I had bigger fish to fry.  But after this room is painted I wanted to add floor length drapes in a fun pattern or something. Of course, there are also three pieces of furniture in here that I will also paint one day when I can get around to it.  And I would like some more substantial shoe storage and shelving.

I hope you enjoyed seeing the changes in his bedroom!  In case you missed it, I showed you Miss 17 Year Old’s bedroom here.

Right now, I am knee deep in some big changes in our three bathrooms, so stay tuned for those reveals some time soon!

Have a great week!