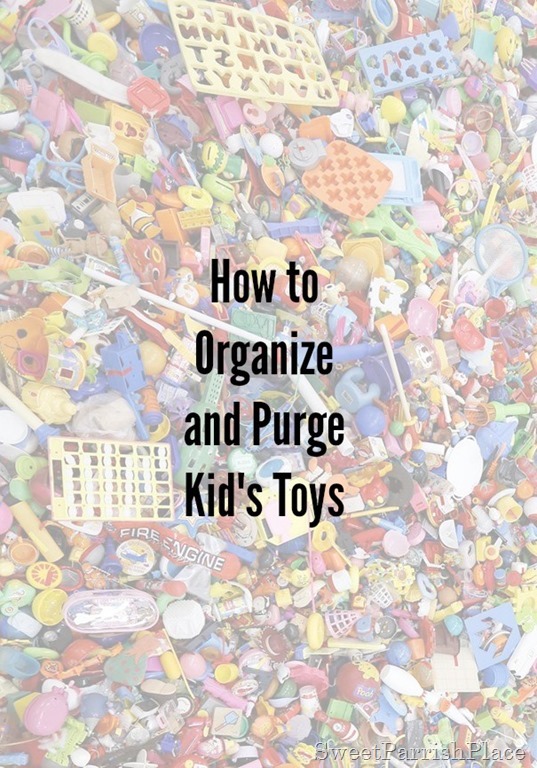 Mr. 7 Year Old has a a lot of toys, as most small children do.  But, as a mother of three, with Mr. 7 Year Old being the youngest, I think he has more than most.  My other two children didn’t play with toys nearly as much as he does.  And, they didn’t get attached to toys the way that he does.  He plays very elaborate make believe “things” like I have never seen any other child do.  He knows all of the toys he has, and trust me, he knows if something is missing.  Over Christmas break, it was way past time for us to clean out his bedroom.  We got rid of about 6 black trash bags of toys, and donated them to a local thrift store.  I thought I would share a few tips today for how to organize and purge kid’s toys.

Today I would like to share how we got rid of 6 black trash bags of toys from this bedroom. 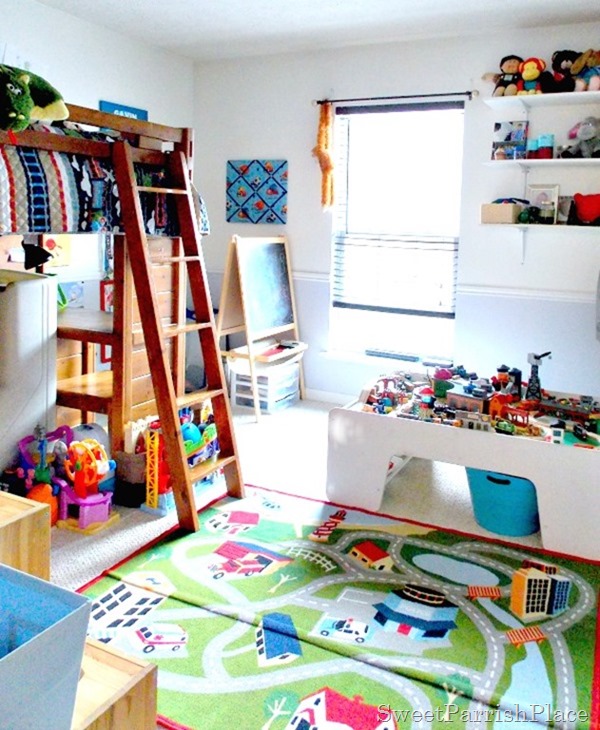 Sometimes the thought of organizing and purging can be overwhelming, so we put it off, because we don’t know where to start.  And then things keep piling up and getting worse.  We may feel overwhelmed, so we just do nothing.
But  I am here to tell you, just start somewhere!  Just pick up one bin, one container, one box of something, and dump it in the floor and dig in!  Go ahead, you can do it!
During this big clean, I dumped out every single bin and container and toy box in his bedroom.  We went through every single last little thing he had, in every nook and cranny.  This was a team effort.  Me, LC, and Mr. 7 Year Old worked on this together.  I made Mr. 7 Year old be there for the entire thing, because he is so attached to his toys that we felt he needed to decide what could stay and what could go.
I started with these toy bins.  I purchased this toy storage from Ikea many years ago, actually for Mr. 15 Year Old, and they got handed down to Mr. 7 Year Old.  He has a lot of small items that he plays with on a daily basis, and most of them now fit into these bins.  They hold his Legos, his small cars and trucks, his battery operated Thomas Trains, his “little characters”, and things of that sort.  I did purchase chalk board labels to label these bins, but at the time that I took these pictures, I had not attached them yet.  But they are all neatly labeled now.  It helps my husband more than anyone when he is helping to clean his room.
I dumped out each one of these bins, one by one, placed everything we were keeping back into the bins organized by category, and the things that we were not keeping went into a trash bag. 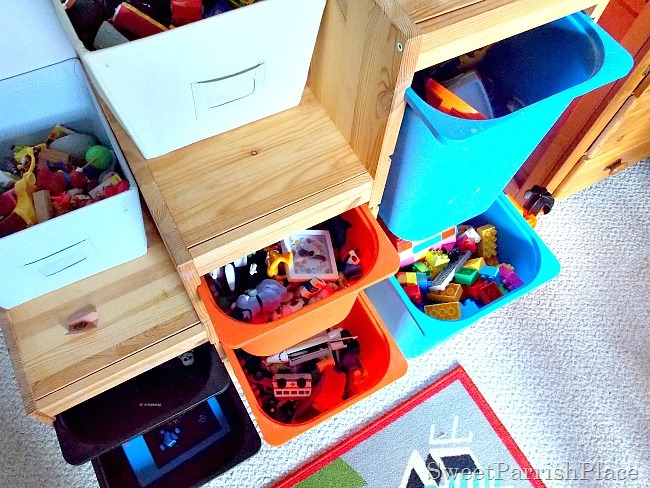 I am secretly waiting for the day that he is ready to part with this train table. I am sure one day I will long for the days of the train table and regret saying that.  On each end of this train table, there are three plastic bins that hold wooden trains.
I also dumped all of these bins, purged what we were not keeping, and organized them better.  There were very few things in these bins that he chose to purge, because he refuses to part with his trains.  I think he may end up keeping them in Rubbermaid boxes and saving them for his own children, because he just loves them so much.  The blue tub under the train table holds extra train tracks for the table.  This table used to have so much stuff underneath of it that it was stuffed full.  After purging most of it, we are left with a single blue tub.  That makes me happy!
The shelves above the train table got a huge purge, and the only things that went back onto the shelves were things that he collects, his piggy bank, and some special photographs.  There used to be a red roman shade type of curtain on the window, but I just didn’t like it anymore, so I removed it, and I will eventually hang some fresh new curtains on this window.
To the left, under the ladder, are some larger play sets that fold up and unfold.  We decided this was a good place for them. 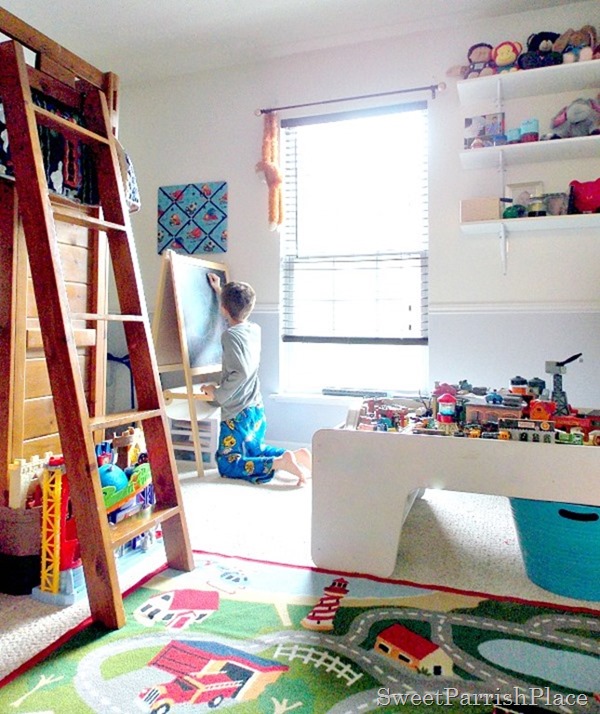 This art easel was a Christmas gift last year, and he plays with it all of the time.  It has a chalkboard on one side, and a dry erase board on the other.  We purchased it from Ikea, and I think it was only $9.99, great deal!  It also has a roll of paper on the bottom.  The drawers underneath of the easel hold additional art supplies.  I also purged and reorganized what was in each drawer.  Right now, he is really interested in making his own illustrated books with paper and markers.
I also hung this memo board for him to hang whatever he wants to put there.  We ordered the personalized Thomas canvas years ago online, but I don’t remember the website.  The red frame behind the easel holds some artwork he did that I let him choose, and he can also use dry erase markers to draw on the glass. 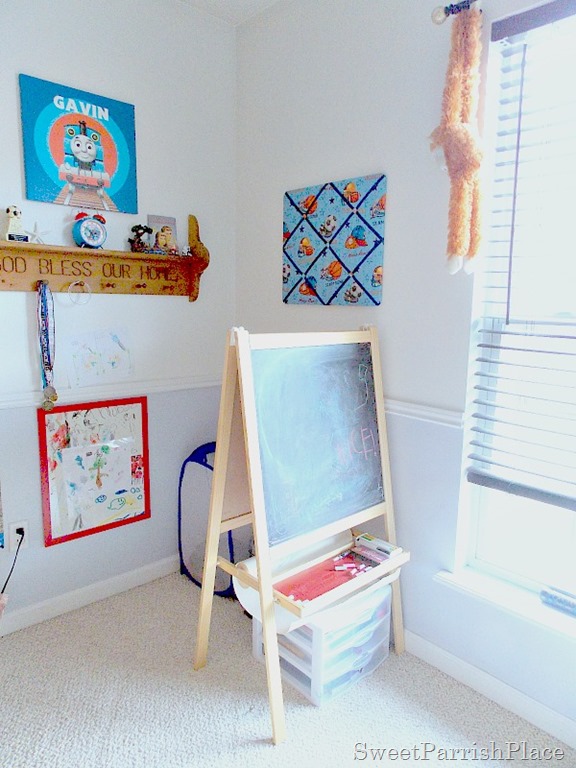 To the left of the art easel is his desk.  This spot is constantly a mess because he loves to sit here and make his books.  I dumped everything out of all of the desk drawers and we threw away quite a lot of stuff that was stuffed in these drawers.  Now all of his desk supplies are nice and neatly contained here. On this opposite side of this desk, and under his bed is a toy box.  It has a couple of shelves that hold all of his books too. I dumped everything out of his toy box, vacuumed and cleaned it out, and we went through each toy that was in it one by one, deciding what to keep and what to get rid of. We took all of his books off the bookshelf and went through them one by one, deciding which to keep and which to donate.  There is also a big cabinet under his bed that holds his movies, which we went through one by one deciding which to keep and which to donate.  The cabinet used to also contain the drawers that are now underneath his art easel.  But we decided it made more sense for them to be where they are now, which freed up an entire shelf in his cabinet.  We used the empty shelf to house his Lincoln Logs. 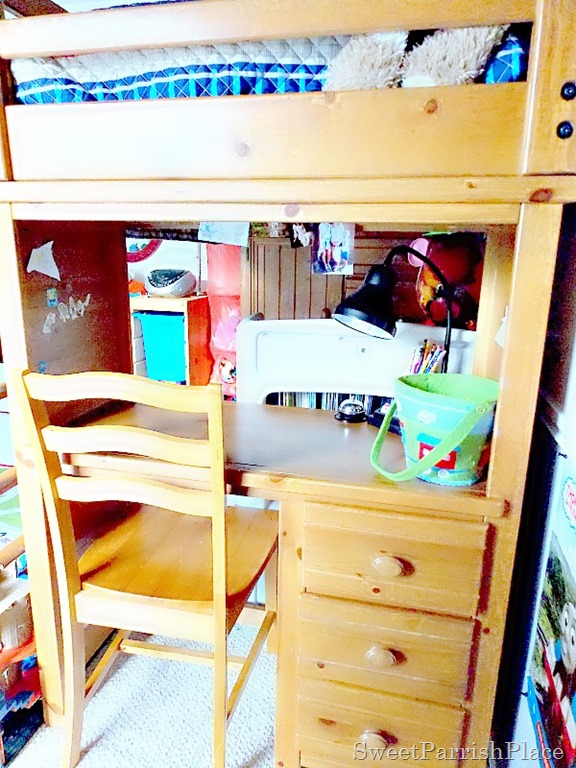 He likes to use tape to hang his artwork on every wall he can reach, so a couple of years ago, I made this DIY art station for him to put things on display, hoping to get him to stop taping things to the walls.  He does use this art station, but I’m not sure I can say he has completely stopped taping things up, because that would be a lie. 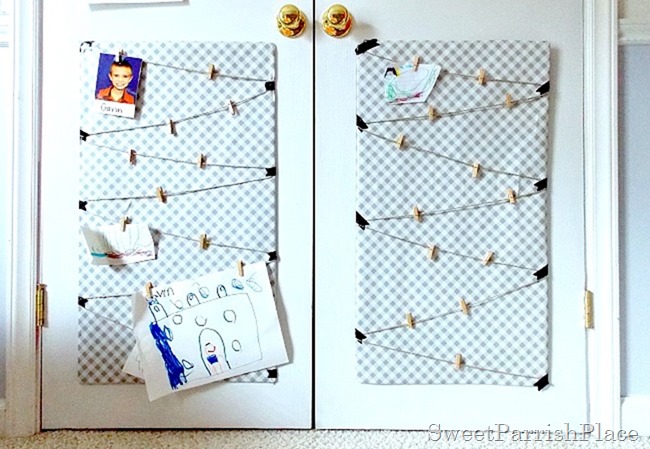 It has little miniature paper clips so that he can easily change things out or hang more stuff. 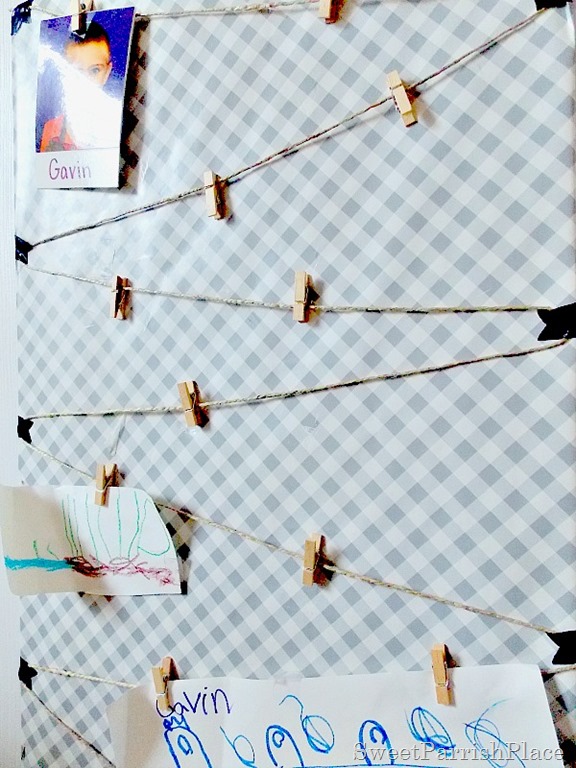 The one good thing about a Loft bed is that it is up so high, it doesn’t really matter if it is made or not, ha!  Good Lord, this bed is a pain to make!  As you can see, he has a train bedspread, and he sleeps with lots of stuffed animals.  We also purged quite a few stuffed animals, but it was really hard for him to part with any of them. 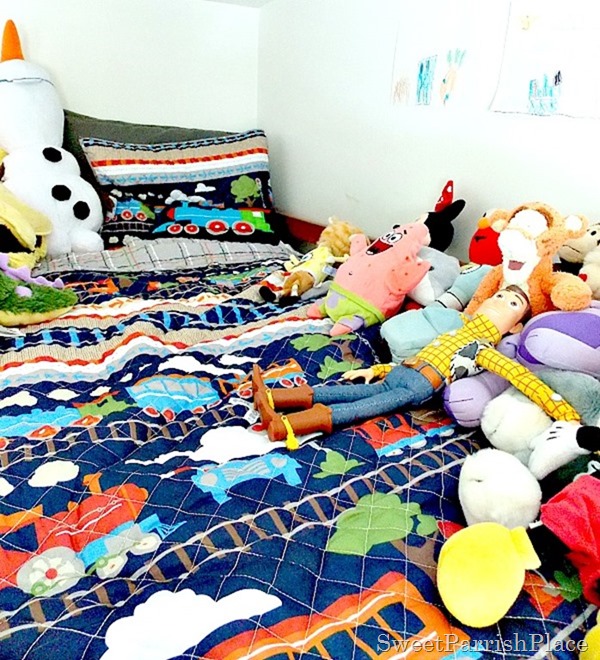 It took us most of the day, but one by one, we purged and cleaned every single part of his room, including his closet.  I went through all of his clothes (which I do several times per year), and got rid of everything that was too small.  We went through everything on his shelves and purged several things.
And he has two large bins on the floor in his closet.  One contains more Thomas Train tracks, and one is for me to place clothes that are too small into.  Once the bin of clothing is full, it is time to donate those clothes.  This system for getting rid of too small clothes works very well for me.  As soon as something is too small, it goes into the bin.  We donate his clothing to a couple of family members who really appreciate getting them!  I didn’t take any photographs of his closet.  But I think I will show you how it is organized in a future post.
I hope reading about how I accomplished my goal of purging my son’s bedroom helped to inspire you to choose a room that needs cleaned out, and just start dumping- one thing at a time- until you have the whole room cleaned out.  When we were finished with this space, I truly felt like I could breathe again when I walked in the room!  I was stifled by how crowded and junked up it was.  I could just feel the empty space, the room seemed bigger, like it could breathe again too.  I have since removed the colorful area rug from his room.  His carpet is so light, I was afraid it would get stained, and I still am.  But when he and LC play it just gets in the way, and they voted it out!  So for now, we have some very light carpet  in a 7 year Old’s bedroom.  We’ll see how that goes!
I hope you have a great weekend, feel like dumping something yet?

This is where I party: