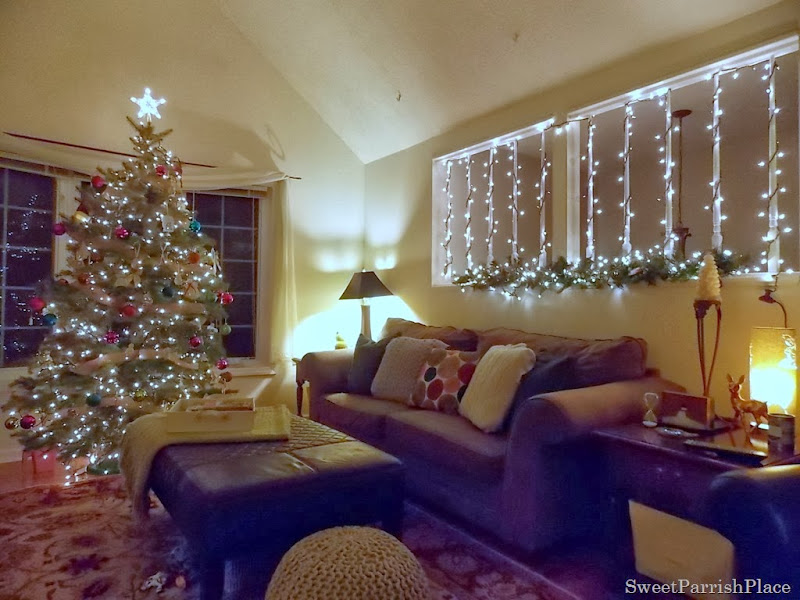 I am working on putting out a Christmas tour of my home, but I am waaay behind, people!  Bad, bad blogger, right?  Well, I hate to sound like a scrooge, but things have not been going my way this Christmas season!  Where is the time going?  Why am I so behind?  Well, I can’t really answer that.  I usually decorate for Christmas in one day, but I have not been able to do that this year.  I have had to do a little bit at a time, and I guess that is how I feel so far behind.  For now though I will show you our Christmas tree.
This is the tree before it came crashing down one evening.  Oh you read that right!  This is the before version.  I had bought several ornaments that did not make it down from the attic until much later.  so the other night, I went to plug in the tree, and after that I planned on tweaking it, adding the rest of the ornaments, and doing the rest of my decorating.
In case you are new here, this is the one room in my house that I have done nothing to since we moved in.  It is on the list for a lot of work.  So it looks nothing like I want it to look!  I am getting a mantle for Christmas, and I can’t wait to show it off once it is hung!  It is being made from an old wagon barn beam as we speak!
So on with the story, I plugged in the lights, which is the outlet behind the tree, and as I was doing so, it just fell over!  I screamed at the top of my lungs!  And of course LC was at work.  The kids and I spent the next hour or so trying to get it back upright and tightened up in the stand.  And I went back and forth between crying, cursing, and laughing like an insane person.  It.  Was.  Horrifying!  And the tree took a serious blow people.  Half the ornaments fell off, the star fell off, water went everywhere, the tree skirt got soaked, some ornaments broke, the lights were all messed up, and it was just a ____ing time at our house!  So instead of finishing my decorating the rest of the evening was dedicated to this dumbass tree!  this is after I finished it for the second time, and added the new ornaments.  Minus the tree skirt, which was in the wash at that point. 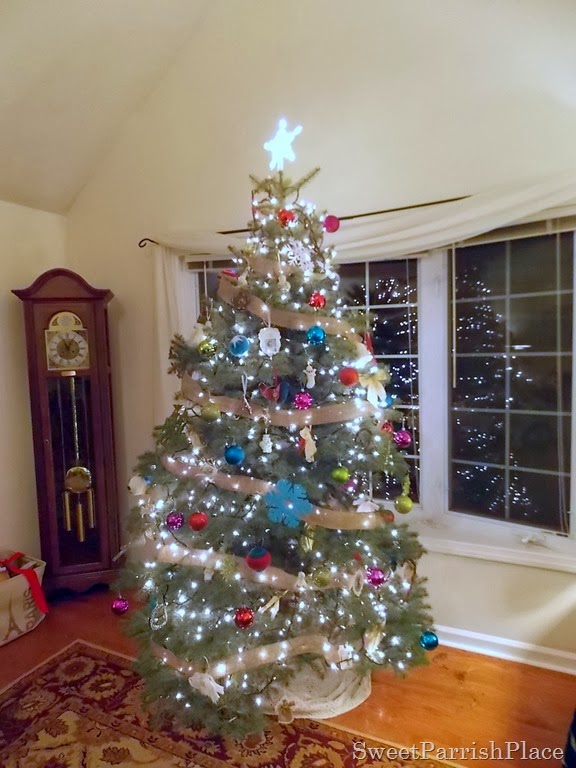 This will be the second and last year we get a real tree.  We decided it was just not worth it.  Pine needles everywhere, especially after the tree fell, and the watering three times a day.  No to mention the fact that the heavy ornaments just don’t do as well on a real tree.  and I have quite a large collection of Lennox ornaments that are fairly heavy and fragile.  I don’t want them broken!  They were expensive!  This one was also before the tree fell. 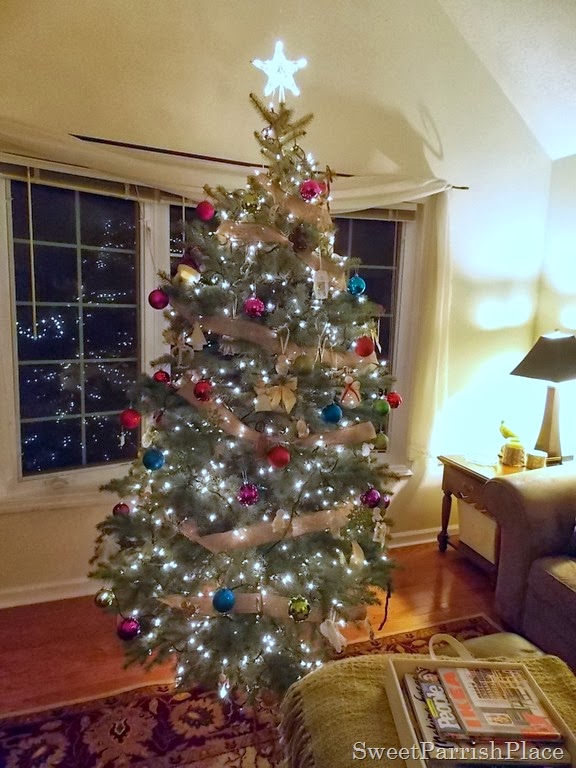 Here is what it looks like during the day with no lights.  And this is also before the fall.  And before the skirt made it down from the attic. The star is new this year.  I bought it for less than $10 at Kroger of all places!  And I love the way it looks all lit up. 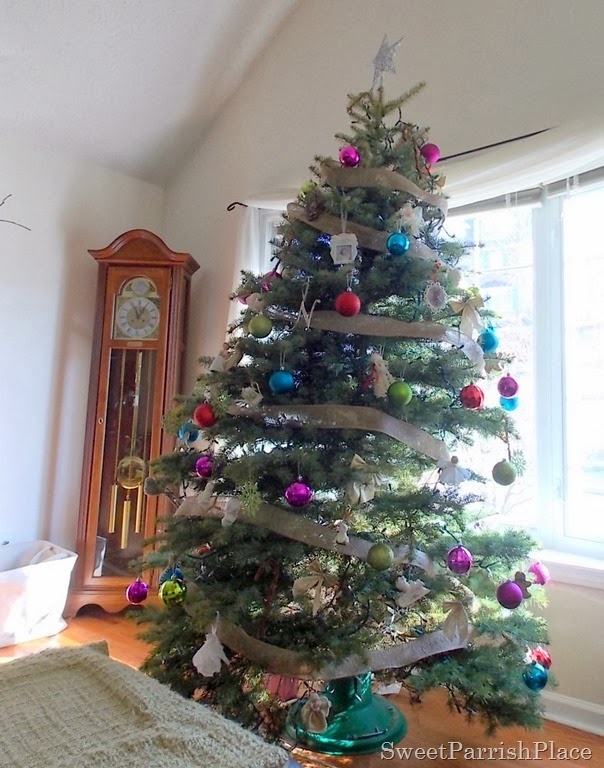 And the rest of the pictures are some close ups of my ornaments.  The bulbs were purchased in a big pack from Target.  This is the second year we have used them on the tree.  I like the colors.  You can also see a Lennox tree, and any ornaments you see in white are my Lennox collection.  I have collected these over 20 years or so.  You can also see some rustic candy canes and some initials.  We all have our initial on the tree. 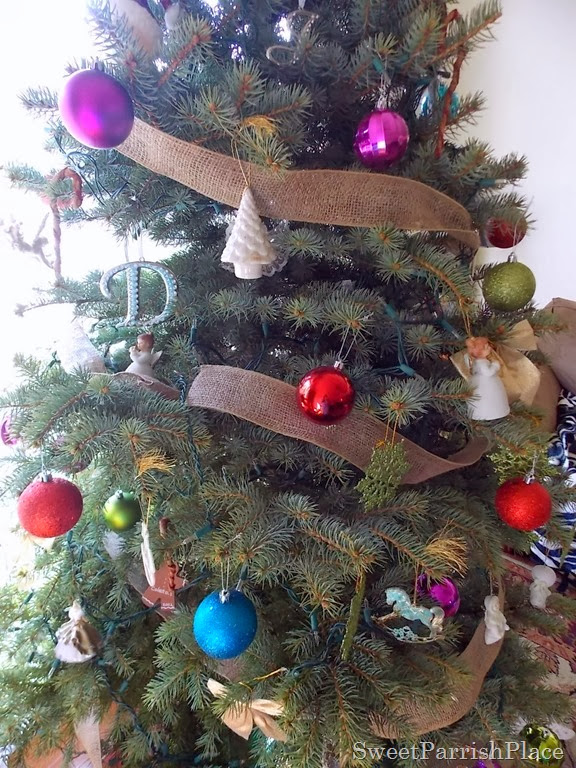 The large snowflakes were from Target the day after Christmas last year.  They are felt, and I love them! 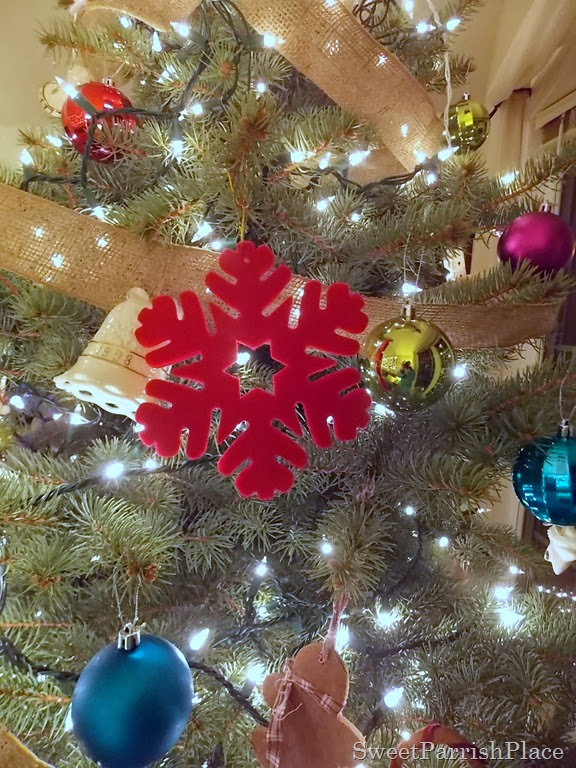 That is Mr. 5 Year Old’s first Christmas ornament.  I also have a variety of hand made angels and gingerbread men on the tree. 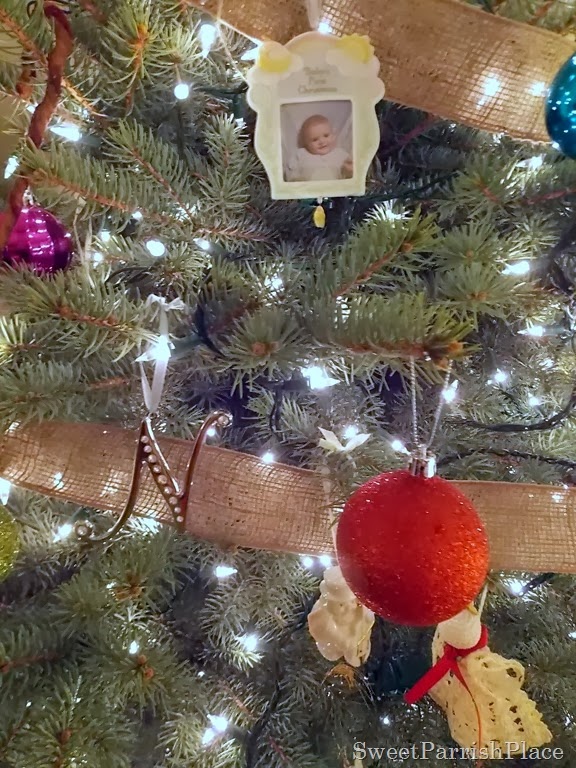 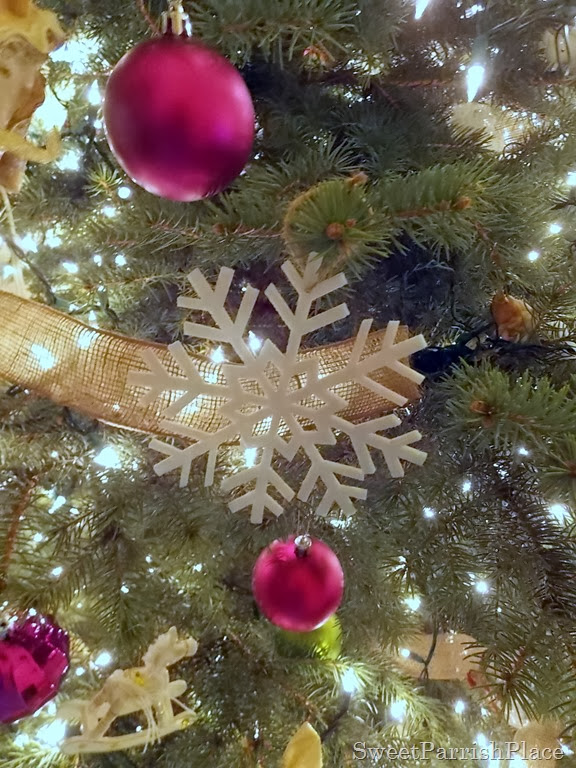 That Santa has been with me for over 20 years.  It is a family favorite. 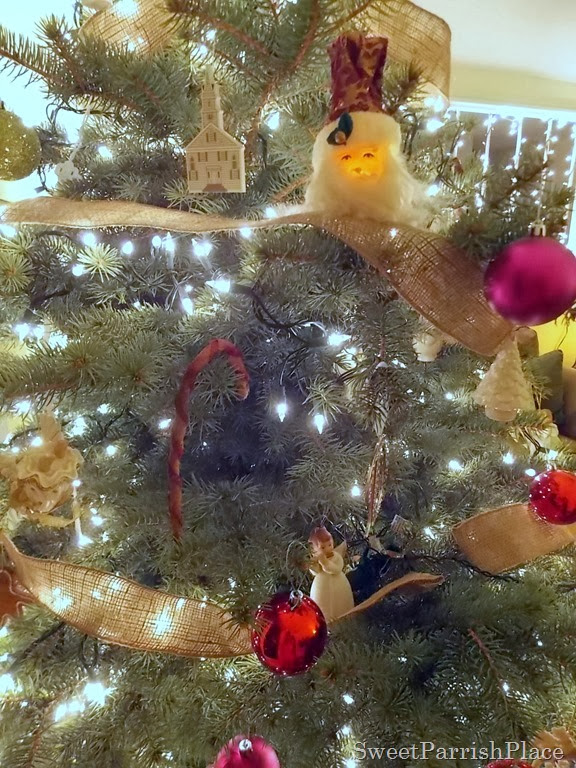 The glittery bird is my own and only Pottery Barn ornament.  I wish I would have bought more of them.  I wrapped the tree with burlap ribbon for the first time this year. 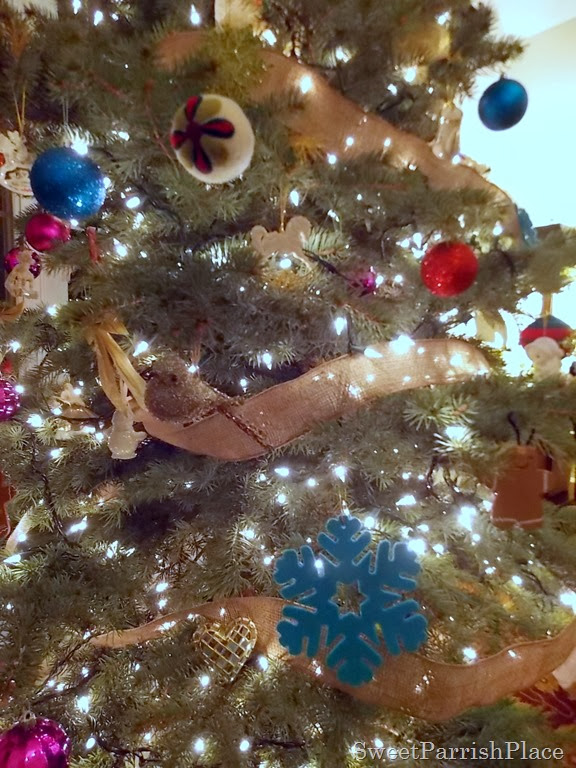 I also have some glittery gold bows scattered about. 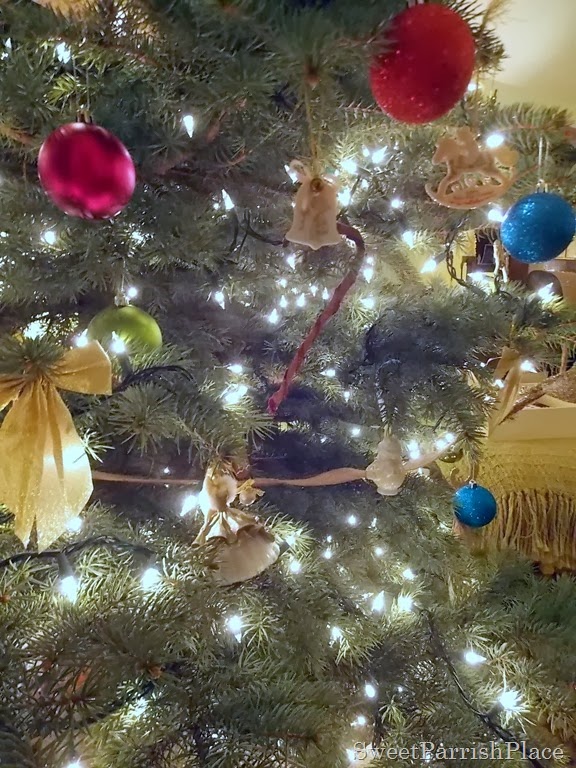 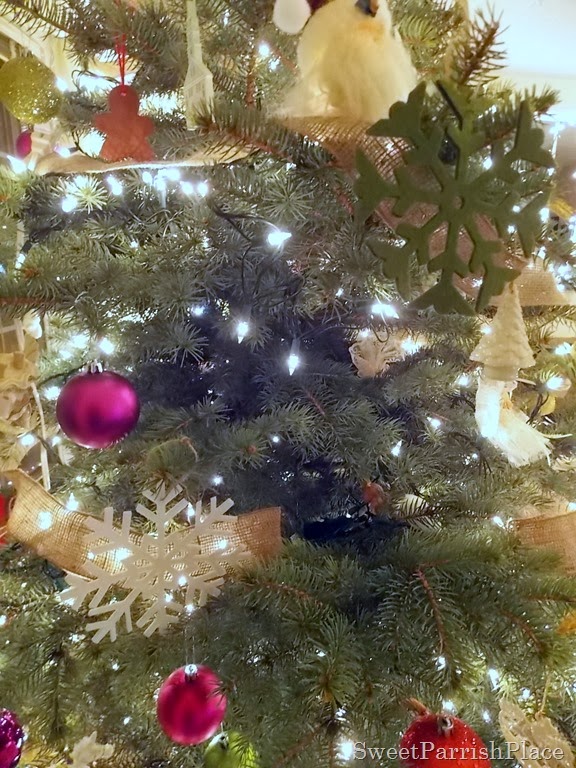 I finally think I am finished with my decorating, but now I have to get things clean so I can take pictures of the rest.  I used a lot of fresh pine.  At the Christmas tree farm they give away branches of fresh pine, and I brought home several.  Last night I was working on all of the branches and cutting them with some garden snips.  I sliced into a finger really good.  I almost passed out!  Thankfully LC was  home last night!  It made me really light headed just thinking about cutting my finger with those dirty things!
Am I the only one having decorating problems this year?  Or is everyone else having the perfect Christmas season?  I am just thankful to finally have it completed.  Hopefully this weekend I will have time to clean and take some pictures for a Christmas tour next week!  I hope you will come back and see it!  I promise to be in a much better mood!
If you would like to see our 2012 Christmas tree, you can click here, and here for the tree that was in our family room.