We have had a laundry emergency occurring at our house for the past week and a half.  Our dryer broke down.  Insert sad face here.  As a family of five, we need a working washer and dryer.  Laundry is a dreaded chore for me, and a never ending one.  I feel like I am almost never caught up!  I try to stay on top of the laundry, but if I go two days without doing laundry it just piles up.  Last week, our laundry came to a drastic halt.  I first mentioned that our dryer was broken here.  So ever since then I have been relying on the help of others to get out laundry done.  I have sent loads to my mother, and to my kid’s grandmother.  And it has come back clean and folded.  Wow, maybe I should just never get it fixed!  But seriously it has been a huge pain in the arse!  For instance, I have to change out the bedding in the dog cage every day or two because she pees in there, and it is disgusting!  I was not going to put anyone through washing those!  I can barely stand to hold them between my thumb and forefinger and practically throw them into the washing machine so as to touch them as little as possible.  So I have not kept up with that the way I need to, and let me tell you, the smell coming from her cage is horrid!  Does anybody want a dog? We love that dog!  So this is the story of our broken dryer… 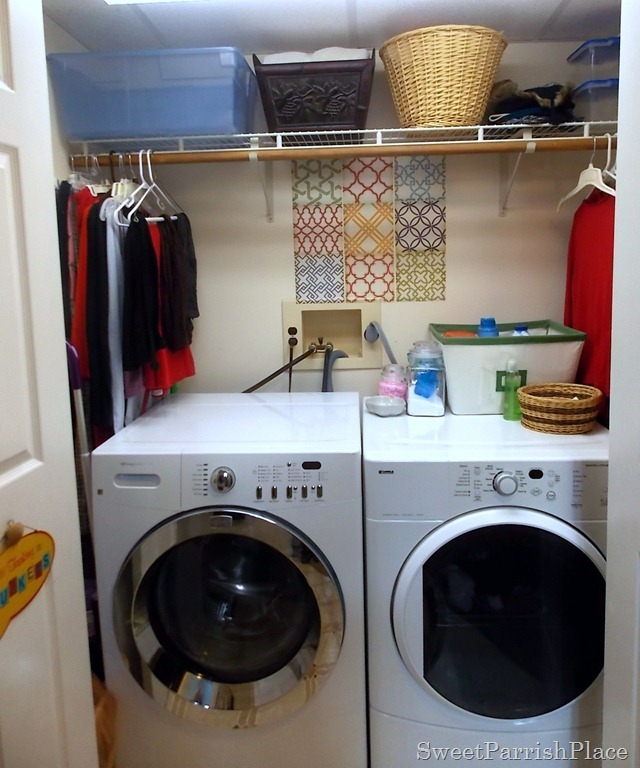 So for the story of our dryer.  I was in the middle of doing laundry, and had probably dried three loads or so.  I went to throw in a load of towels, and boom, it would not start.  Panic ensued.  I did not have an owner’s manual. Reason being that we moved in here in June and this washer dryer was already here.  We asked the previous owners to leave these because the ones I had were purchased in 1992.  They were Kenmoore, and the washer had never been serviced, and the dryer only once.  They were still going strong too!  Back to the story- The first thing I did was find the owner’s manual online and print it out.  All 52 pages of it, including a Spanish copy.  Might have wanted to ask which language I wanted to save me the ink and paper, but oh no!  There was a code that lit up on the panel, so I looked it up, and all it said for that code was to call service.  So I did.
Sears was able to tell me that the dryer was purchased in 2007.  That was an interesting tidbit.  Sears also told me they could have someone out the next morning, but it would be $75 just for him to knock on the door!  The barely able to speak English nice woman on the phone offered us a protection agreement that would cover the service call and anything that needed fixed for $200.  After some discussion about it, we decided to purchase it because we had no idea how much it would cost for the part we would need and we figured we would already be $75 in from the get go.  The agreement also covers the dryer for the next year.
It turned out to be a great decision to buy that agreement, because when he came, the part he thought we needed, including labor, would have been $350.  Whew!  So the part was ordered, and he was scheduled to return on Wednesday.  Well, when he came to fix it, it didn’t work!  I almost cried at that point.  He said it was because the part was a refurbished part, so her ordered a brand new one on an emergency order.  Well, he came back today to fix it, and Holy hell is what ensued!  The new part didn’t work either!  At that point he started to take the dryer apart.  I never even knew a dryer came apart!  Look at these pictures first, and then I will tell you the rest of the story. 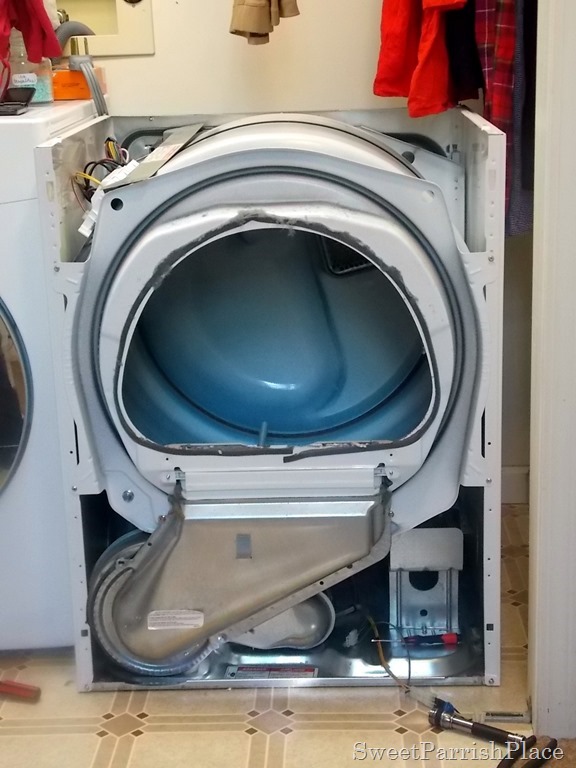 Say hello to the nice repair man!  Don’t you love that craptastic linoleum on the diagonal and then bam- carpeting!? 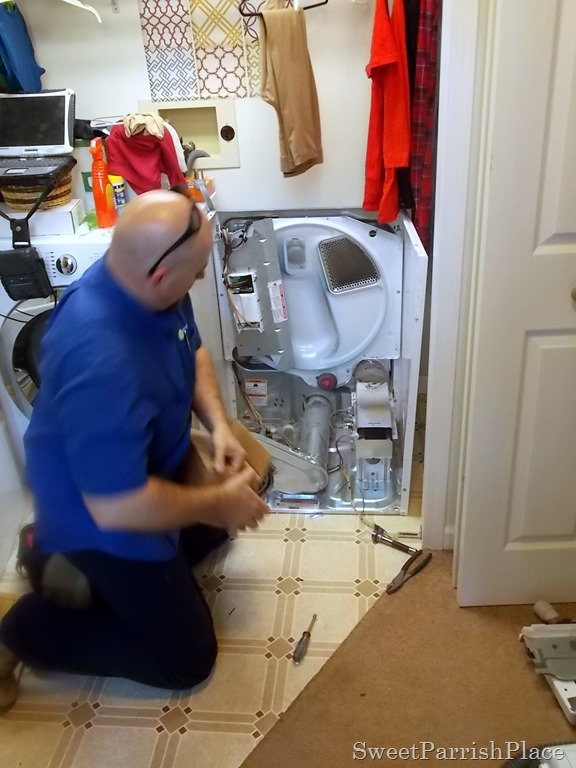 I wish you could have seen the dust and lint piled up under here when he took it apart.  OMG!  I wish I had taken a picture, but I vacuumed most of it up before I thought to take one.  Mr. repair man was so nice to wait while I vacuumed and dusted it all up.  I could not live with myself if I allowed him to put it together without doing so!  And the good news is that he said that what I did probably helped just as much as what he did to extend the life of the dryer! 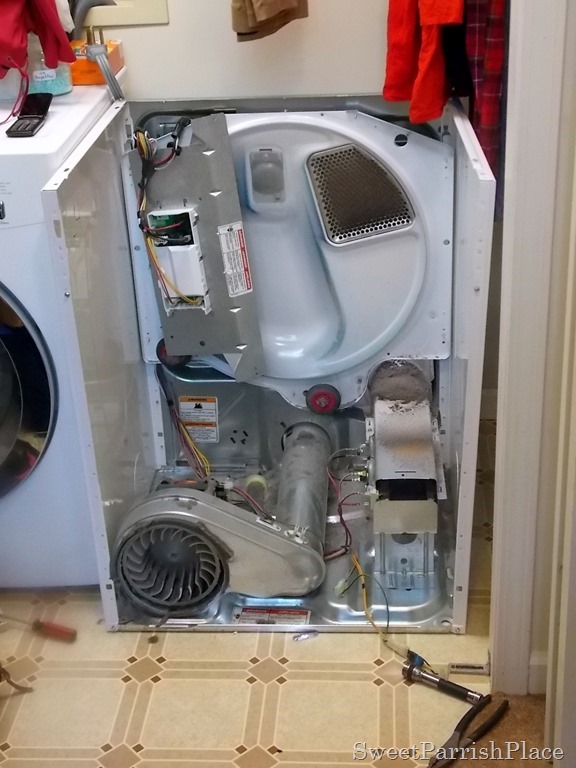 This is the drum. 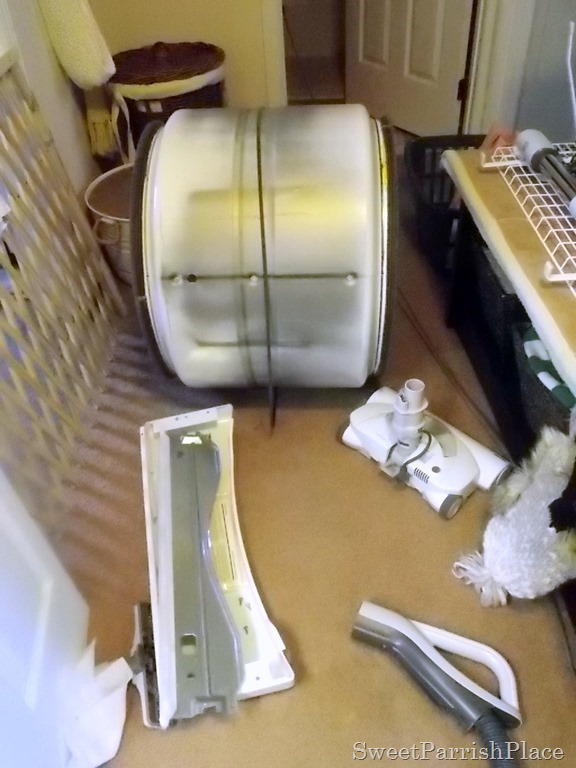 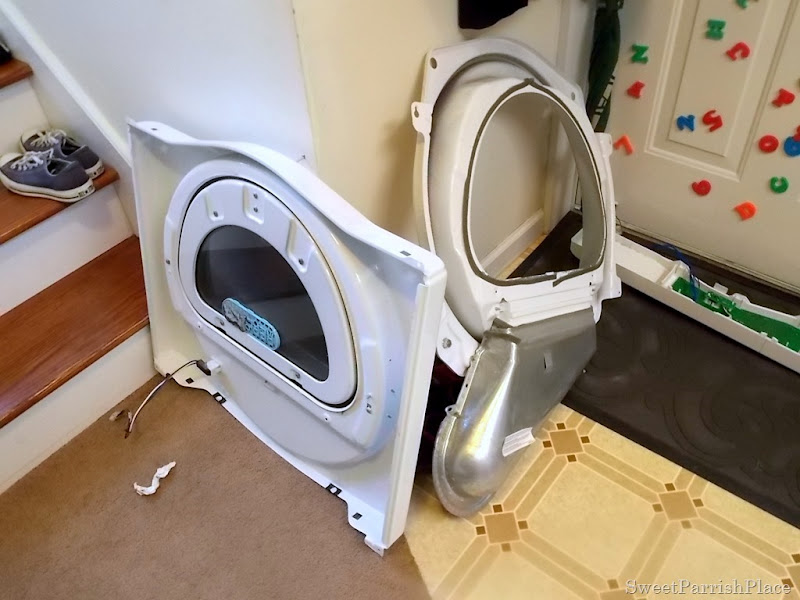 A close up after I had vacuumed some, but not all, of the dust and lint. 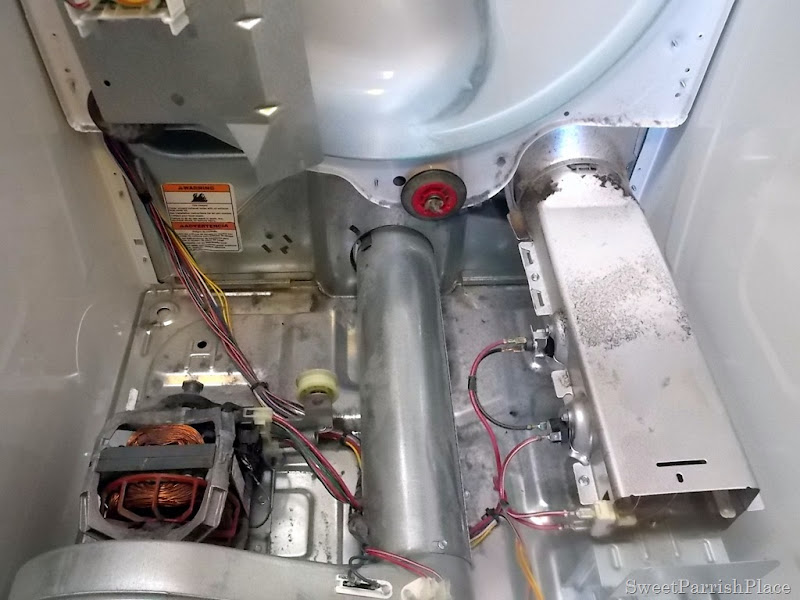 Now, for the dramatic conclusion of our dryer repair-dun dun dun! So first he replaced some kind of fuse, next he tested it by running the dryer on only air.  He said if it stayed cool that was good.  But if it started heating up that was bad.  Well, what do you know?  It started heating up!  That meant the heating coil was bad.  And he did not have the one he needed in his truck.  What?!?!  Luckily he contacted another repair man in the local area and he brought one over.  Wow!  That saved the day!  He replaced it, and it was fixed!  So the good news is that I now have three brand new parts on the dryer.  And I got to clean it out on the inside, which will extend the life and make it run better.  After he put it all back together again, he went and took a look at our dryer vent outside the house.  He told us that he thinks we should clean it out very soon.  He thinks it is full of stuff, which could be a fire hazard, and could make the same thing happen to the dryer again.
So, guess what is now on our LC’s list of things to do tomorrow?  Clean out the dryer vent!  We could hire someone, but he did a little research online and decided he was going to give it a whirl.  My hero!  I still haven’t put it all back together to perfection again.  Give me a break.  It’s Friday, and mama’s tired!