So, how was your weekend?  I hope it was whatever you hoped it would be!  Mine was pretty good.  I felt productive this weekend.  On Saturday the weather was good, so I finally got to plant all of the pretty flowers LC bought me for Mother’s Day.  I thought I would show you the results today.  And, in keeping it real, I will also show you my little DIY fail.  Well, I have decided to let you be the judge of whether it is a fail or not, mmmkay?  I decided to use what I had and instead of purchasing new pots to plant the flowers in, that I would spary paint two of them a bright sunny color and use them on my front stairs.  Don’t leave until you scrool down the page and look at my sunshine yellow planters.  I am not liking them.  I left them alone in hopes that they would grow on me, but every time I pull in my driveway I silently cringe just a little.

I decided to show you my favorite of all first.  Please do not expect me to know the names of all of these flowers, because I can assure you, I do not!  This pot is on my top story of my back deck.  There are two of them just alike, and they turned out to be my two faves.  In each pot I planted one hosta, one geranium, and some other greenery that will hopefully spill over the ends and look lovely as it grows. 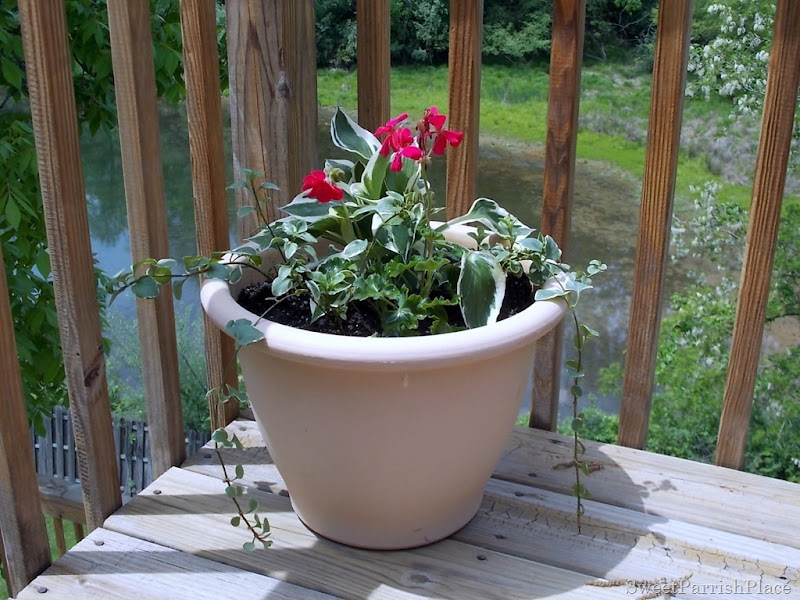 Where did I come up with the idea for the grouping, you ask?  Why, on pinterest, of course!  Here is my inspiration picture.  Are mine just the same, no, but I tried to mimic the plant arrangement.  I have more to show you on the back deck, but lets go around to the front of the house for a while. This planter sits right in between my two garage doors.  I just sat the containers of flowers down in there to make sure I liked them together.  And I did. 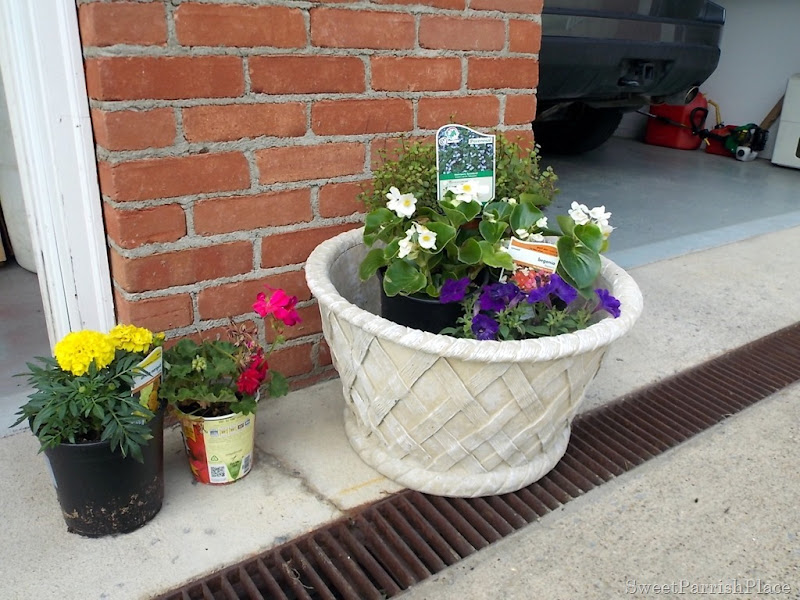 This is the finished product.  Again, the ones around the edges should spill over eventually. 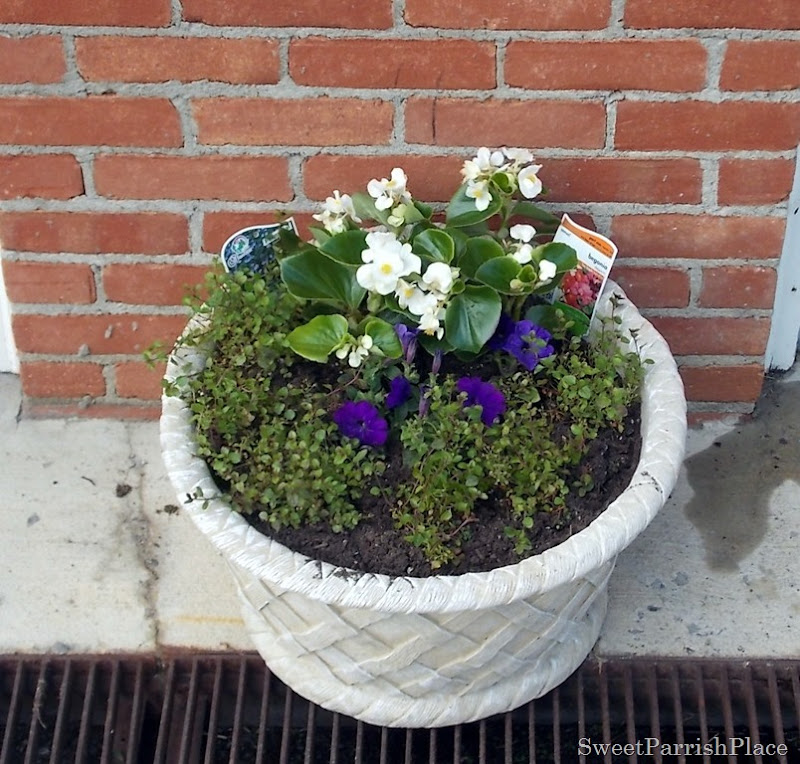 And now, for the moment you have been waiting for!  The pots I painted.  Well, obviously, you can see the colors I used sitting smack dab in the middle of this picture. 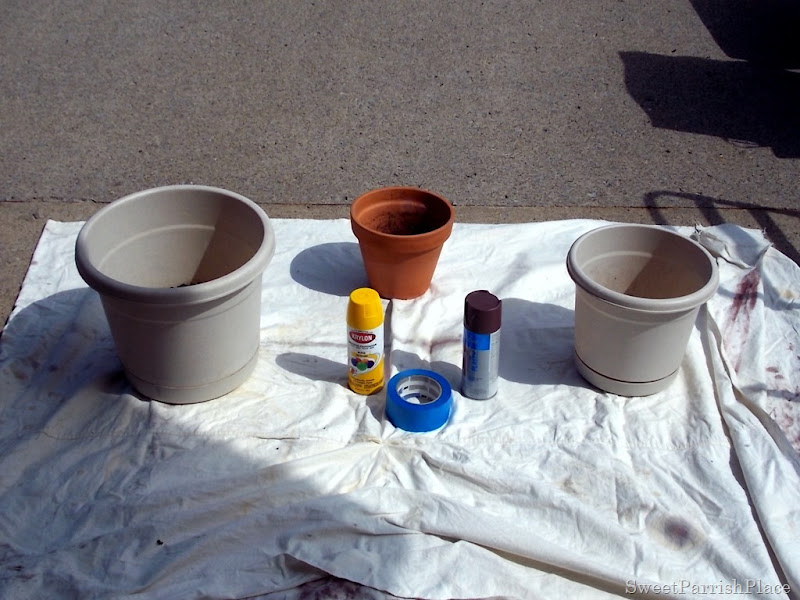 Do not ask me why I decided to paint the bottom saucers a different color.  I was hoping for  a dip dyed look.  That did not happen!  At first I wanted to paint further up the bottom of the pots, but I couldn’t get the lines straight because they narrow as you get to the bottom, so I gave up on that.  I did decide to just paint the rim on the terra cotta pot.  At this point I am seriously questioning my paint color, but I keep pressing on.    It was after the 2nd or third coat that the snake made it’s appearance.  I freaked the hell out people, and Mr. 5 year old was along for the ride. 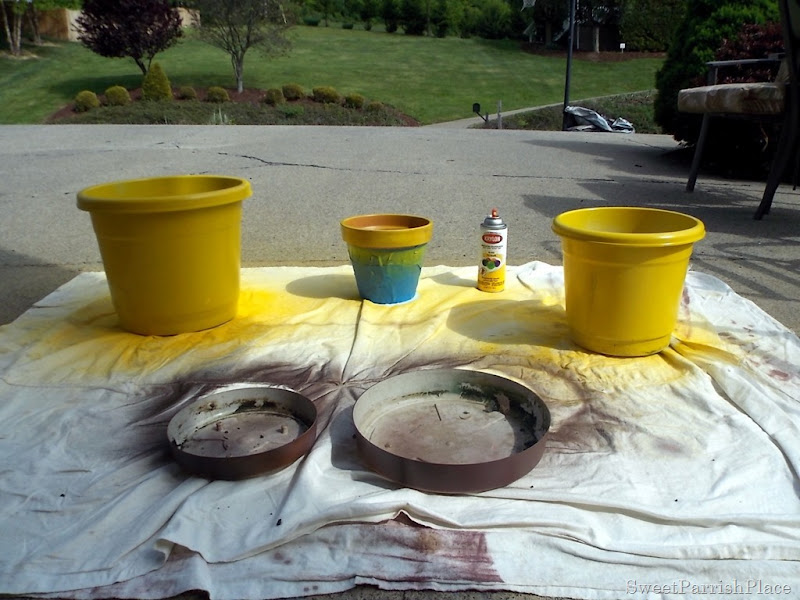 These pretty purple and white flowers are the ones that will be going into the sunny yellow pots.  And see the greenery in the landscaping to the left of these flowers?  That is where the snake emerged.  Right.  After.  I.. Took  This.  Picture.  EEEEEEEEK!  Needless to say, I left everything and ran and did not go back out until LC was home for dinner.  He served snake duty while I finished the painting.  Wanna hear the rest?  It gets juicy!  Wait for it…. 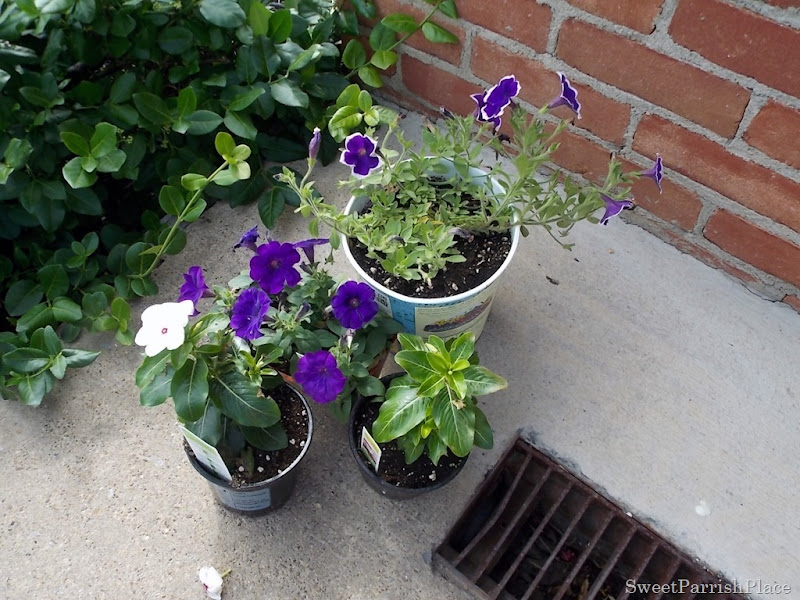 I bought two of these little wooden planters in the fall at Goodwill.  They say dill on the labels, but who cares?  I am using them for flowers!  These are the cute little sunny yellow one’s I chose.  In this picture they are just sitting in the containers, but I planted them. 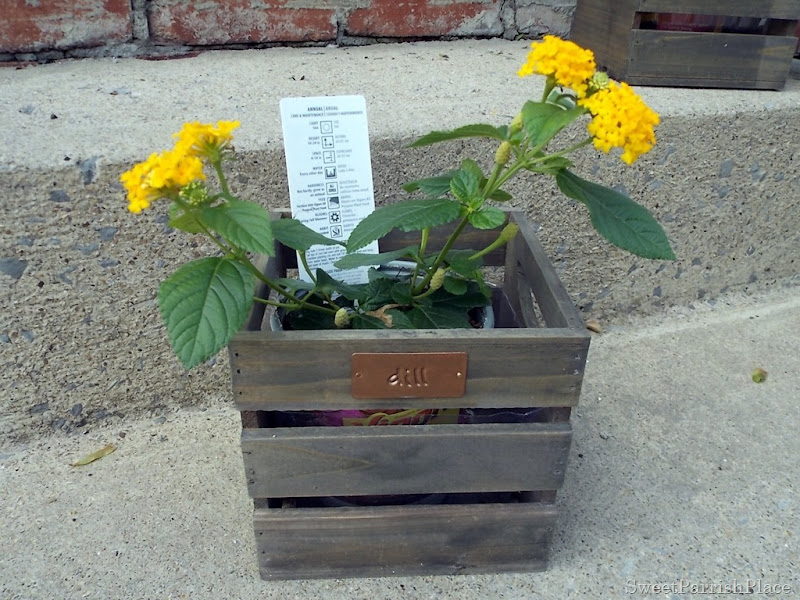 LC bought me this little watering can at Home Depot, also on Mother’s Day.  Love the pop of blue! 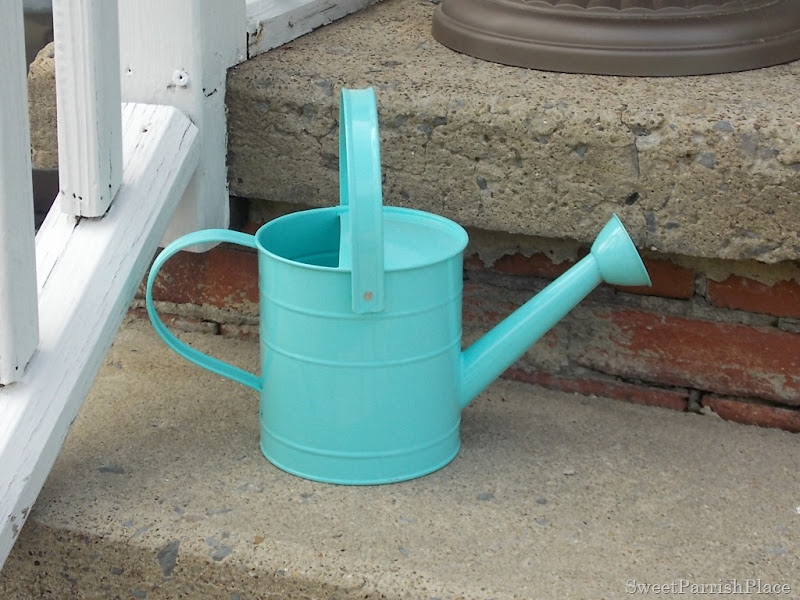 And here is my front stoop and stairs after I finished planting everything.  And now you can see the sunshine yellow planters in all of their glory.  Seriously, what is your opinion.  LC says they are fine.  I think he is lying.  They do not look fine to me.  At all. 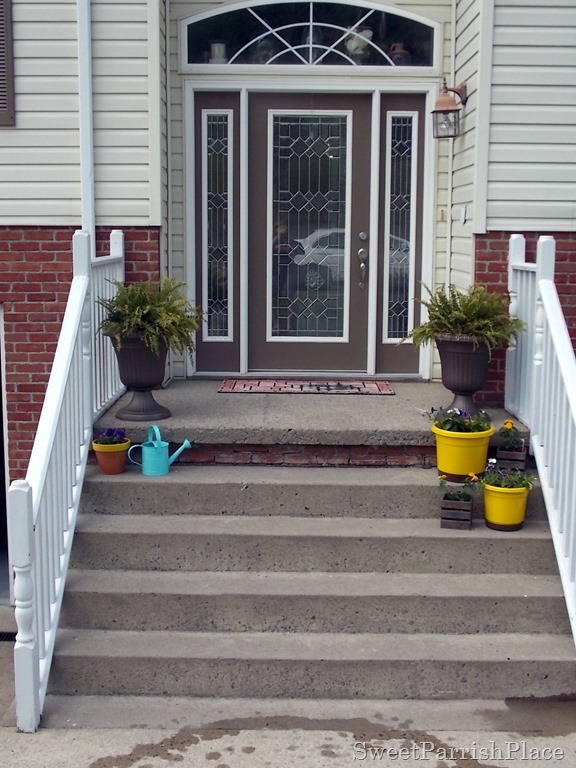 I don’t mind the sunshine yellow on the rim of my terra cotta pot. 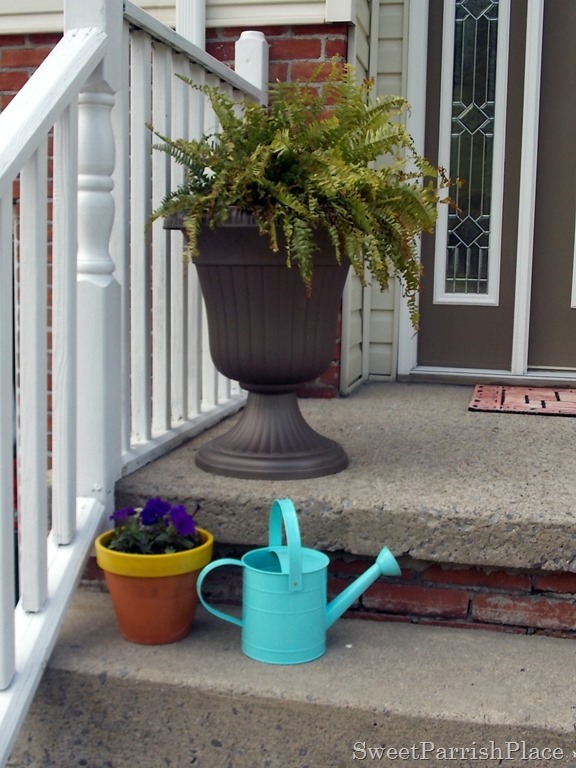 But on these planters?  I have serious doubts.  BTW the little flag was a Mother’s Day gift from my kids, so I thought I would show that to you, it is on the other side of the stairs next to the yellow planters. 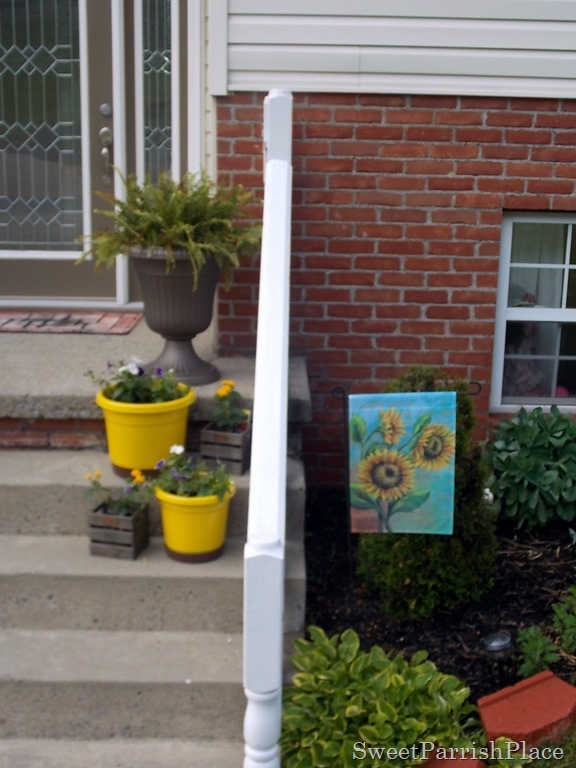 Let’s move out to the back deck, where I am much happier with my results!  Shall we?  This is the variety of plants I planted out there. 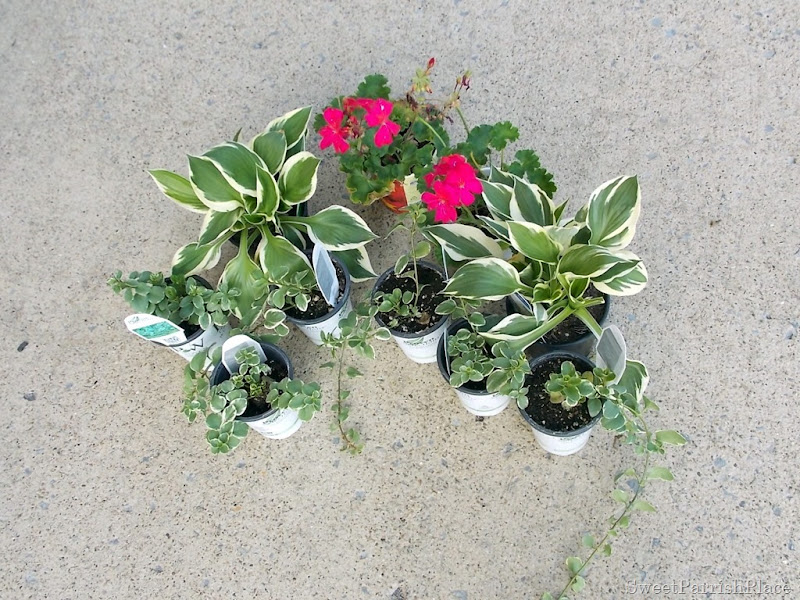 There is a single geranium in this pot between the chairs.  There is also a small terra cotta pot in which I planted the little flower Mr. 5 Year Old brought home from school to me.  I have no idea what kind of flower it is yet because it hasn’t bloomed. 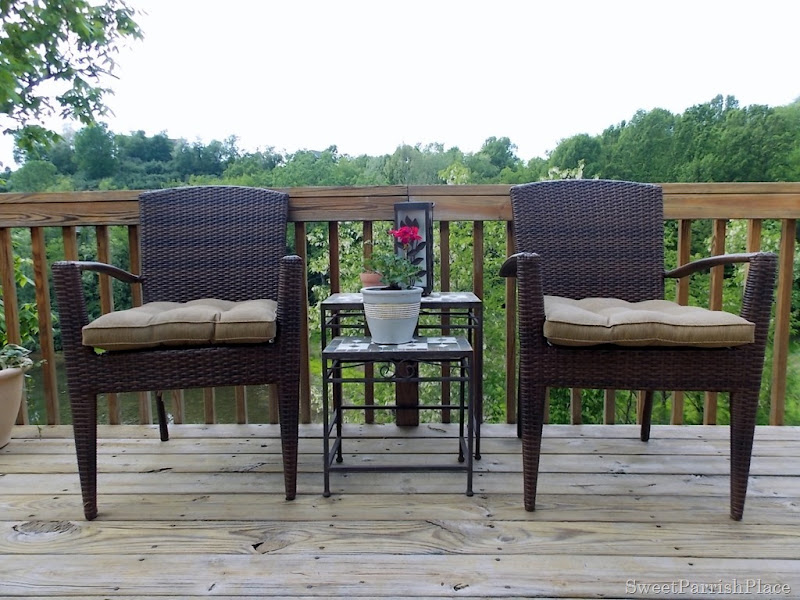 This is the second of the two planters out back that look the same. 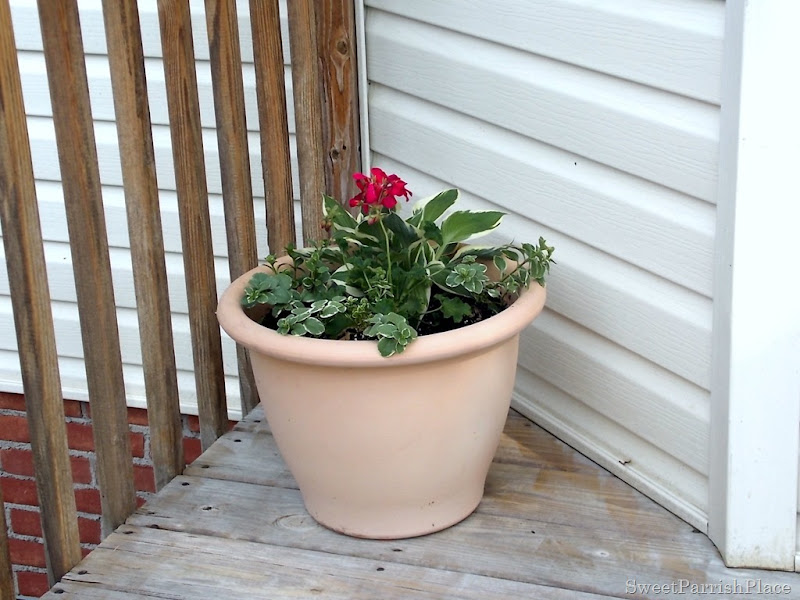 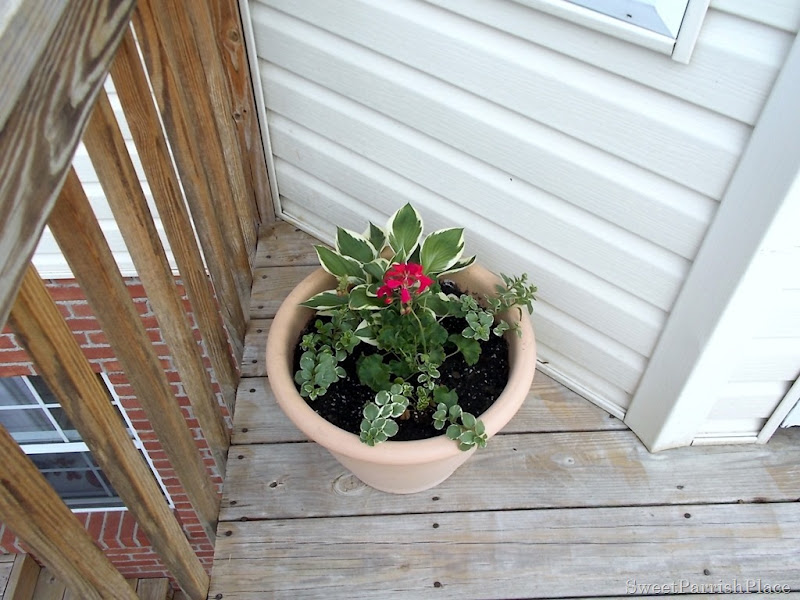 The lantern in between the chairs is actually a solar lantern that I bought last summer.  It looks really pretty at night.  It has a green glow.  You can see one of the two planters over there to the right. 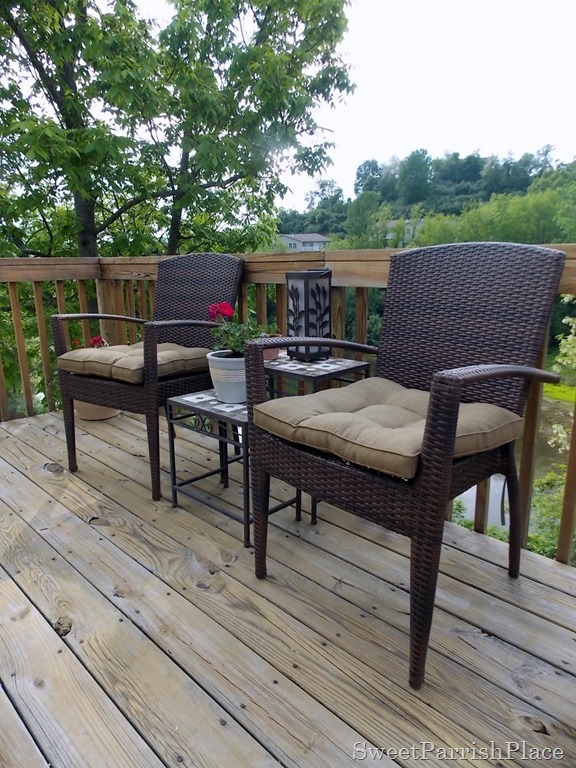 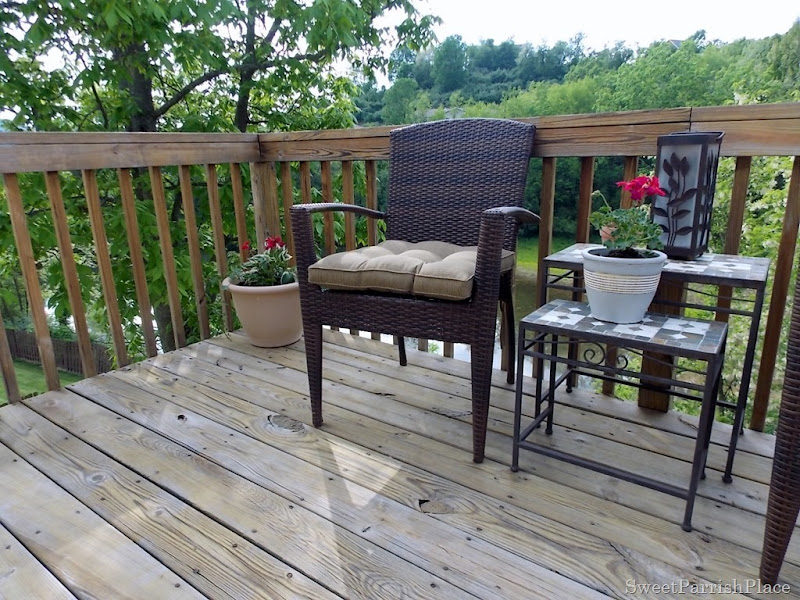 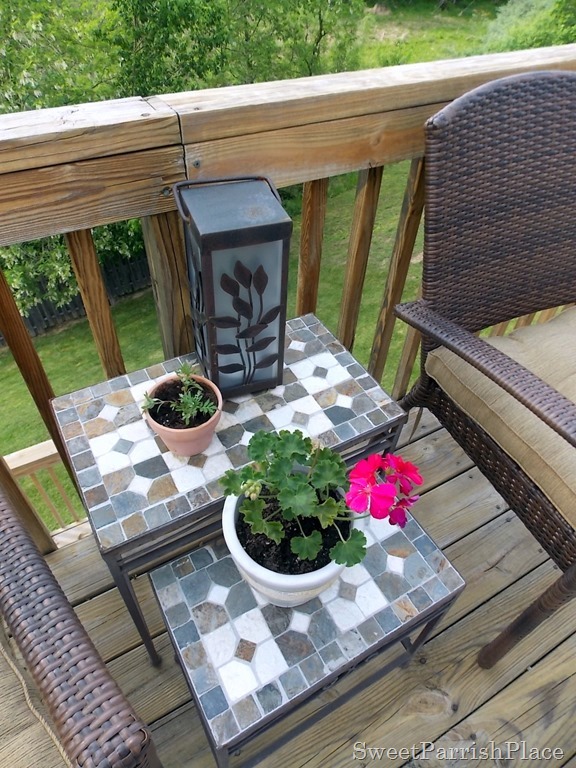 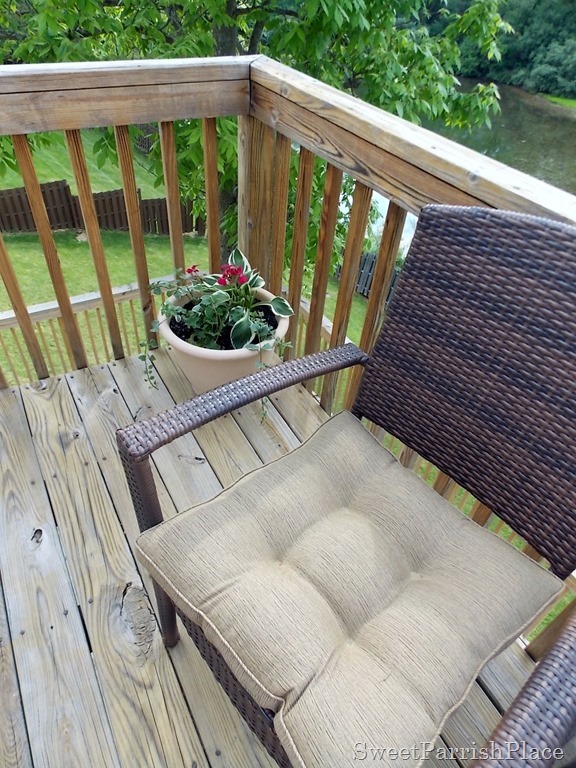 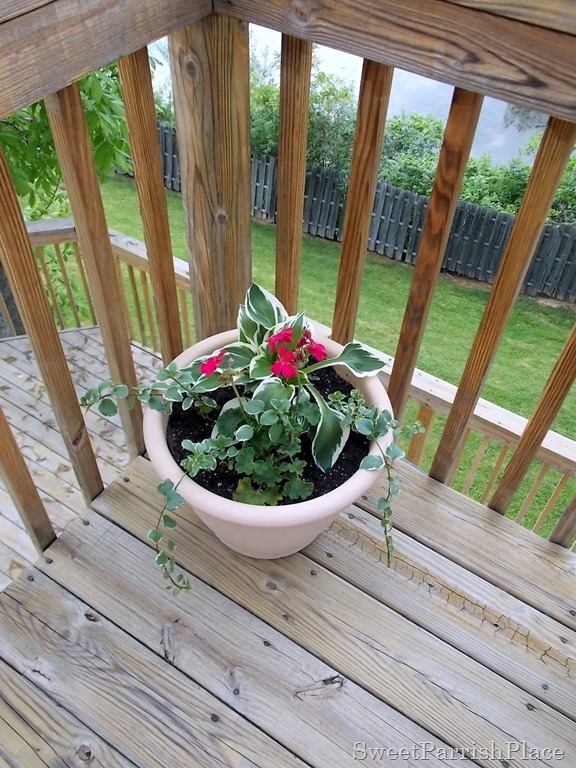 This is the view from my back deck.  I am in love with it.  The winter, however is a different story.  You can see so many houses when the leaves are off the trees! 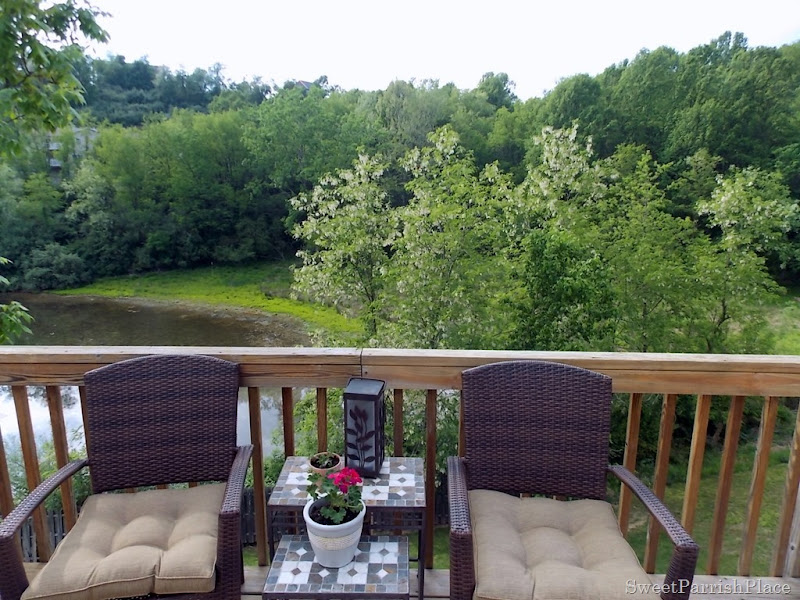 This is the deck I plan to do a paint treatment on.  We power washed the deck a couple of weeks ago, and the difference was amazing!  Click here to see it. 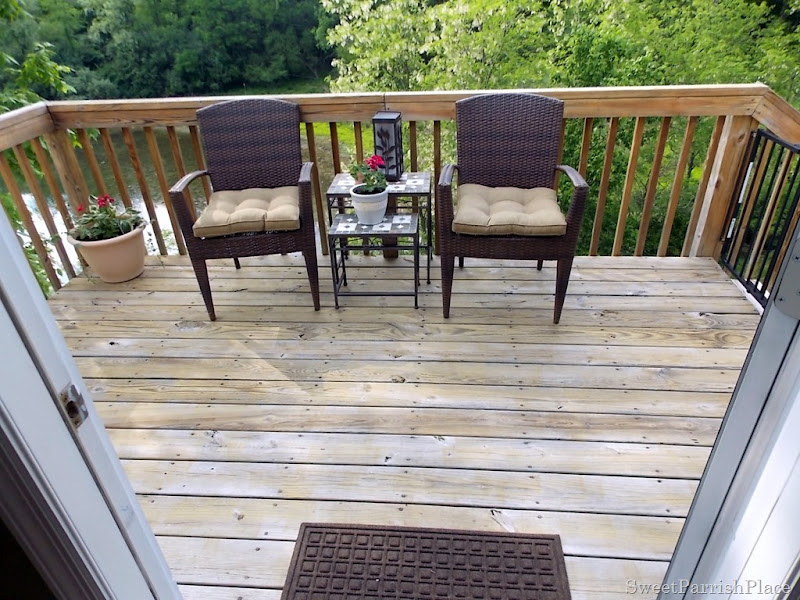 So do you want to hear the rest of the snake story?  I left off above with quitting for th evening because of that snake!  LC told me it would probably stick around that same area.  So the next day he was going out to get ready to mow, and Mr. 5 Year Old was with him. I begged him to hunt for the snake first so I could plant my flowers.   And he spotted the snake shortly after he went out, in the same exact spot!  Mr. 5 Year Old came screaming into the house.  LC ran into the garage after a shovel, and when he got back to the spot he saw the snake go down a hole…in our landscaping!  Gasp!!  I vowed to never go outside again until he hunted and killed that snake.  At that point I think he was thoroughly perturbed with me.  Did I care?  NO!!!  He had one choice if wanted back in the house, and that was to kill that snake!  And guess what?  He waited patiently and the snake reappeared in just a little while.  LC chopped its head off and threw it in the pong.  The only good snake is a dead snake in my book!  My man!
We still have to weather proof the deck with sealer, but we haven’t had time yet.  Maybe next weekend.  I can’t wait because I haven’t been able to get out my furniture yet that belongs out there.  I promise to show you as soon as it is more presentable.  All of these flowers were purchased at Home Depot.  And to be honest, I was more than a little disappointed with their selection.  We usually go to Lowe’s, and I have never been disappointed with their selection.  Therefore, next year we will be returning to Lowes for our summer flowers!
Now, it is time for you to weigh in with your opinions on my yellow containers?  Love them?  Hate them?  Any suggestions for them at all?  I think they are in need of another paint job, but it will have to wait until the weekend because I am crazy busy this week.  Off to a soccer game and a band concert tonight!
See you back here tomorrow for Trashtastic Tuesday! 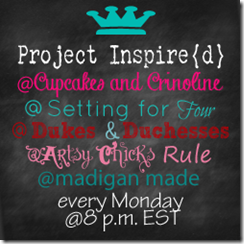