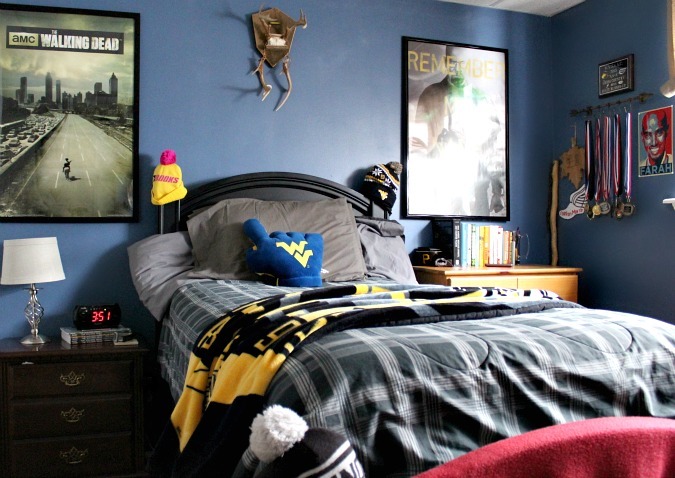 Hey friends!  Today I am excited to bring you Switcharoom part 2!  Last week I shared part 1 of the room switch between my oldest daughter, Delaney, and Mr. 15 Year Old.  If you haven’t read it, you might want to start there.  Delaney’s bedroom is quickly becoming one of my favorites in the house, simply because it feels so light, clean, and calm.  The room we are looking at today is Mr. 15 Year Old’s bedroom, which used to be Delaney’s room.  It is downstairs, along with our family room, a bathroom, a laundry room, and the garage.  And it really does look so completely different now!  It’s not completely finished, there is still work to be done.  But I thought it was good enough to show you today, and I will continue to show the progression of this room.

In case you haven’t seen this picture, this is what this room looked like before when my daughter lived here. I thought it was pretty the way she had it decorated, and I am partial to girly things because I am a girly girl.  But I think my son did a pretty good job of making it his own.

The globe of the ceiling light had been broken, so I replaced it with this globe that looks like a mason jar.  I didn’t have any lightbulb to put inside that wasn’t swirly looking, but I would like to replace it with a better looking bulb soon.  My son sweats a lot at night, so he is looking forward to having a ceiling fan.  No chance of that being replaced! 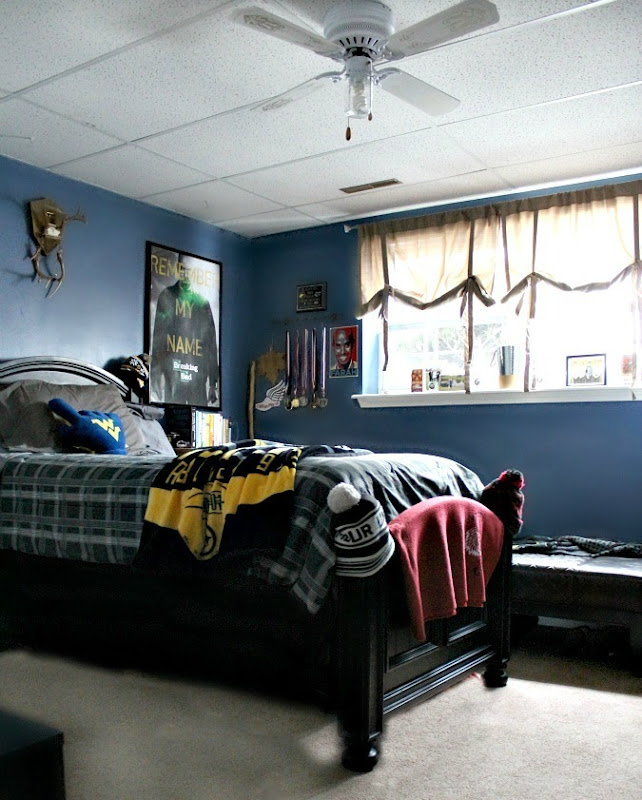 This room is 100 percent my son.  He chose the paint color, and he painted it himself mostly.  I did come in and touch up the trim, and hung curtains.  And I purchased a few new items like the curtains, the arrow to the left of the window, the lampshade, the tv hanger, the bulletin board and the wire hider. 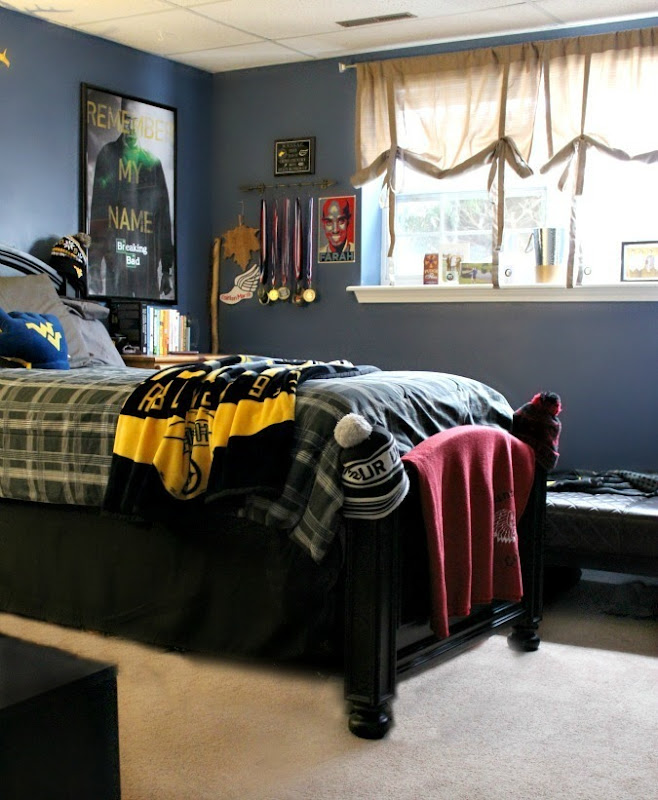 These weren’t exactly the curtains I was going for, but I only went to Target, and I hadn’t the time or energy to go anywhere else, so this is the best color they had in this type of curtain.  I don’t want a long curtain on these windows because eventually there will be a futon under them, and I don’t want the curtains getting in the way of whomever might be sitting or lying on it.  I like these because you can choose how you want them to be hanging, and to be honest, my son likes it dark as a cave in there, so he keeps them all the way down.  The bucket you see here in the window is from the Target One Spot.  I figure he can use it as a catch all to hide some uglies. 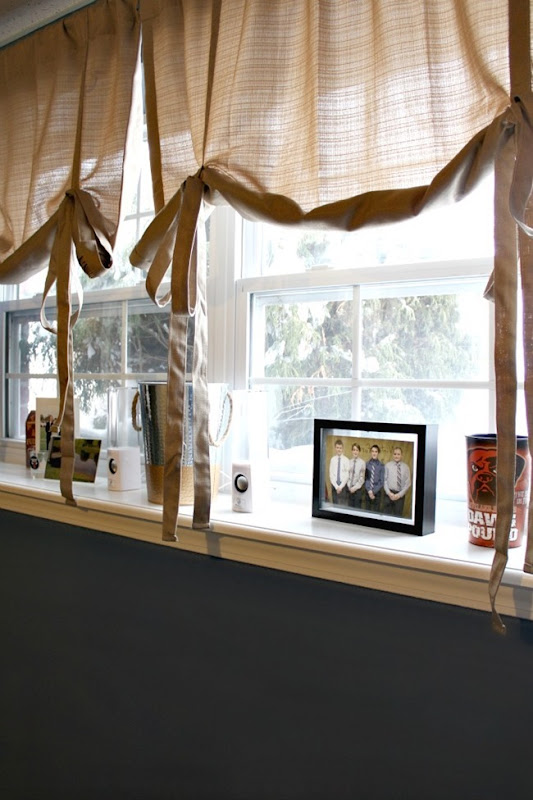 This small dresser was purchased for his nursery when he was a baby.  I toy with the idea of painting it one day, probably will.  We were so fortunate once again that we were given the paint for this room makeover.  My son chose the color Denim.  The paint I used is sold at Lowe’s, and it is from their HGTV HOME™ by Sherwin-Williams line of paint.  This paint has several different color collections to choose from.  And each color collection has over 20 colors to choose from that are designed to work beautifully together.  It’s a full proof way to create a cohesive look in your home.  I had a bit of a difficult time photographing this room because of the deep color, and the fact that outside there is landscaping covering up some of the natural light from coming in.  So this room is never terribly light. 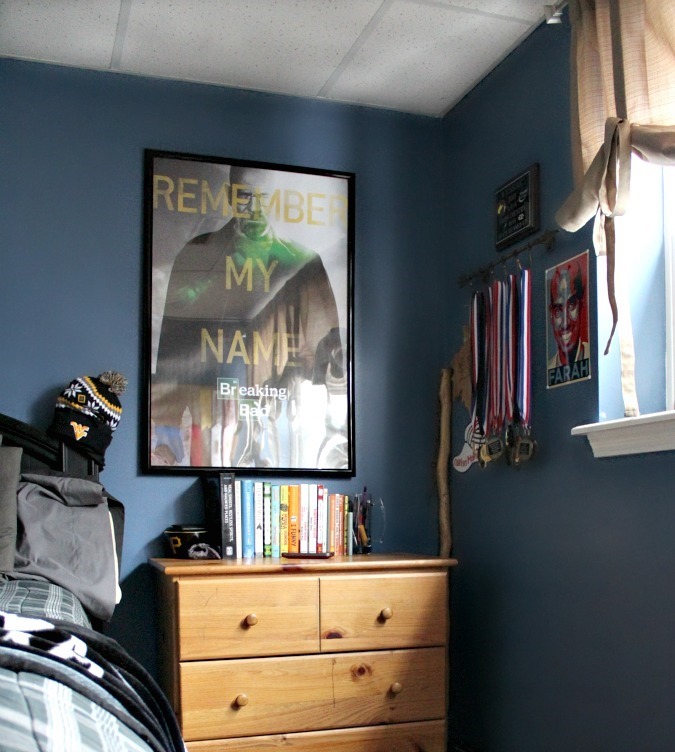 He has two posters hanging on either side of his bed that are posters from his favorite television shows, Breaking Bad and The Walking Dead.  He likes to wear toboggans in the winter, and he decided to put one on each of his 4 bed posts.  And you can see some antlers over his bed.  Both sets are from deer that he has shot. 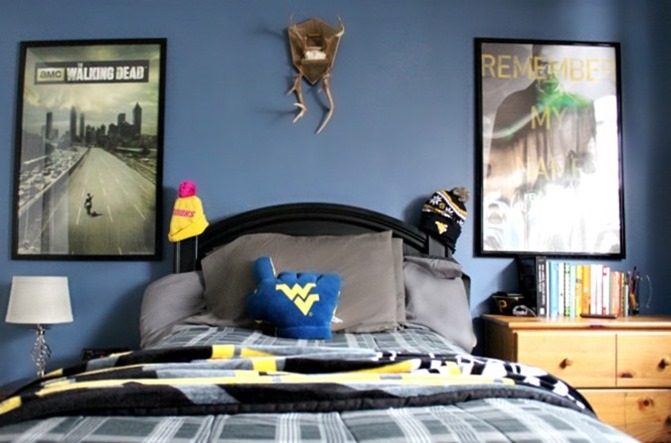 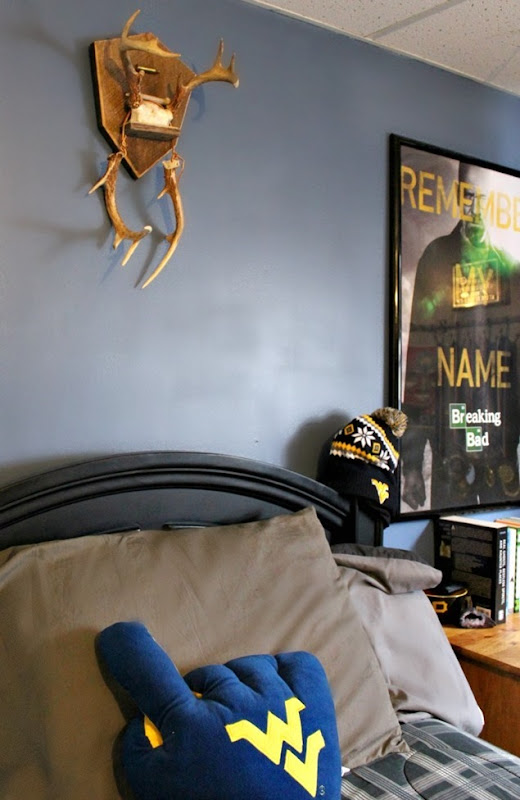 This spot where his TV hangs is unfinished.  We bought him the mount and the white thing that hides the cord.  That thing is a life saver, and we also purchased one for the family room.  I would like to purchase a couple of large baskets to put on top of the TV stand where he can put magazines and games, or whatever he wants.  I don’t like to add much decor to his dresser areas, because honestly, he junks them up so much, that I feel like if I place baskets and containers strategically instead, things don’t end up looking as junked up because he can hide things in them.  If you look a the picture below you can see a closet to the right.  That is the smaller of two closets he has, and he hung all of his shorts on the top rack, and he put his mini fridge and his large hamper on the floor in there.  And then there is a shelf right above the fridge where he can put things too. 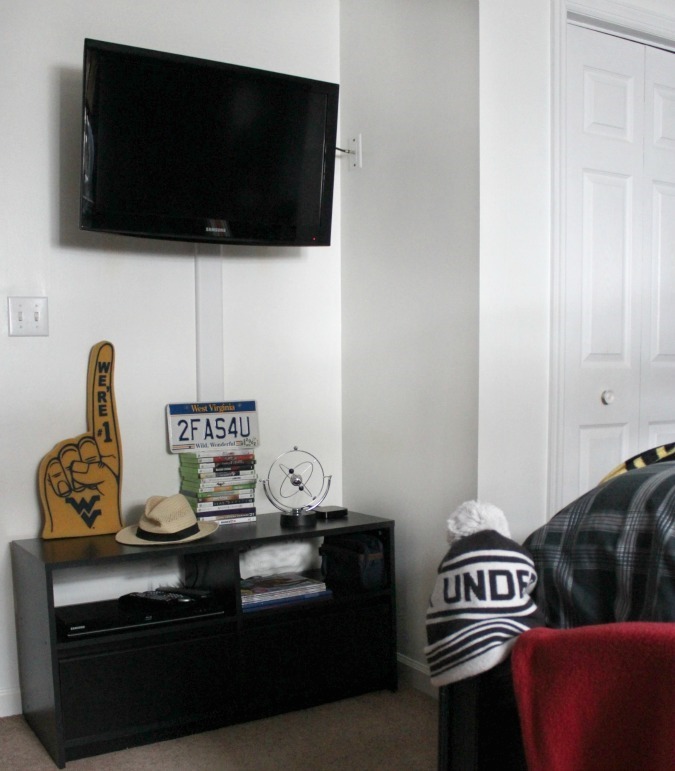 You can also see the mount we purchased.  It comes out from the wall kind of like an accordion, but more sturdy.  And you can also turn it left or right, or push it back flat to the wall.  It works really well for him because the TV wall sits back a little and it would be difficult to see it while lying in bed.  He does have a large round folding chair that he puts in front of the TV stand to play games, but I made him put it up for these pictures. 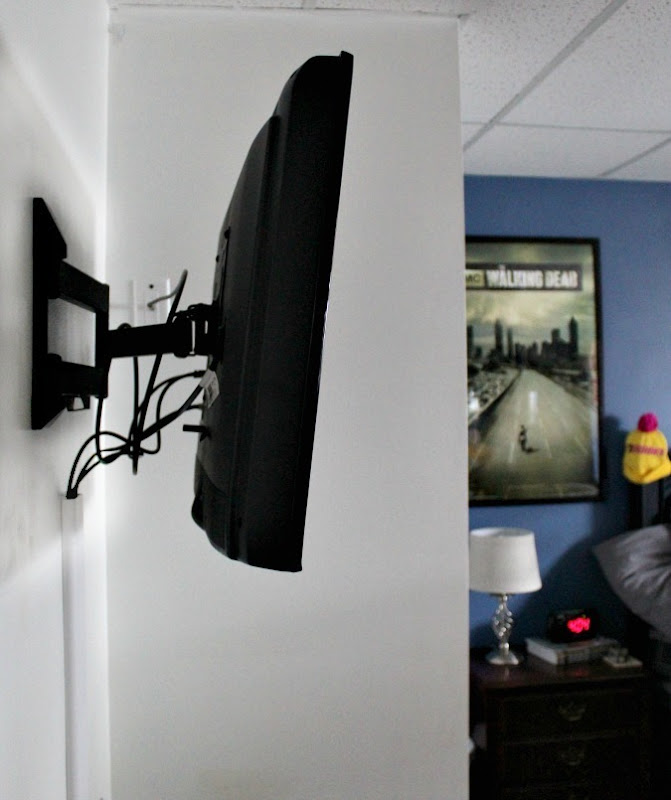 This picture is probably the most accurate picture of what the walls really look like.  You can see if you look that there is landscaping right outside the windows.  So this room is partially underground.  The bulletin board you see is a new purchase.  I decided to keep it simple with a plain bulletin board.  He would like me to spice it up a bit and do something more exciting to it, so I probably will at some point.  He has all of the running ribbons he has earned hanging here.  He only wants to display ribbons he has won, not participation ribbons or medals.  So all of the ribbons and medals you see in his room mean that he has placed at something in cross country or track.  He also lettered in academics as a Freshman, so we were very proud! 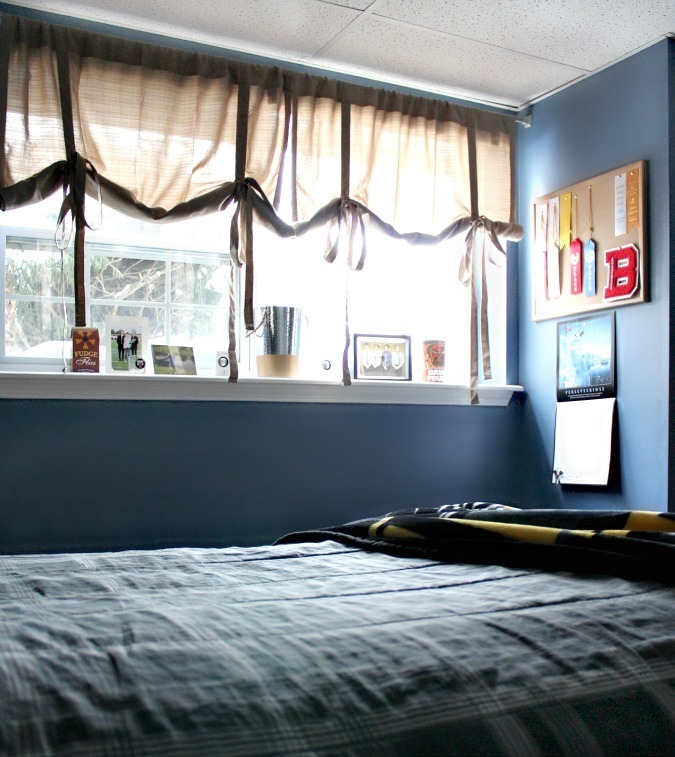 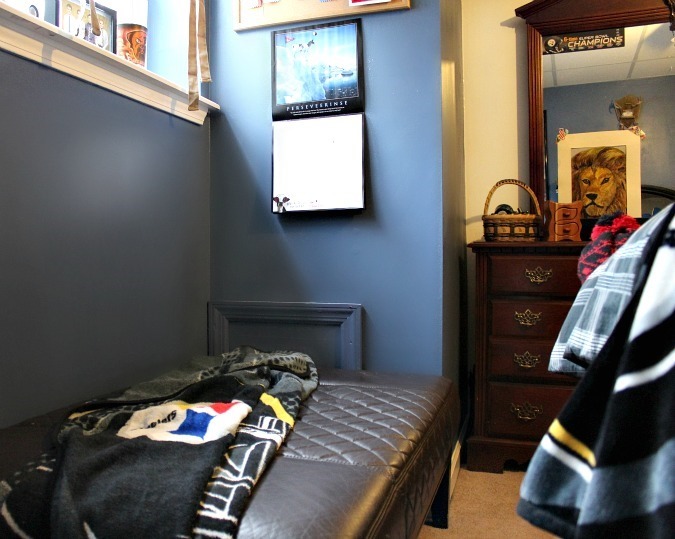 You can see his dresser and his second closet in these next two pictures.  Eventually we will be hanging some shelves on the wall to the left of his dresser. 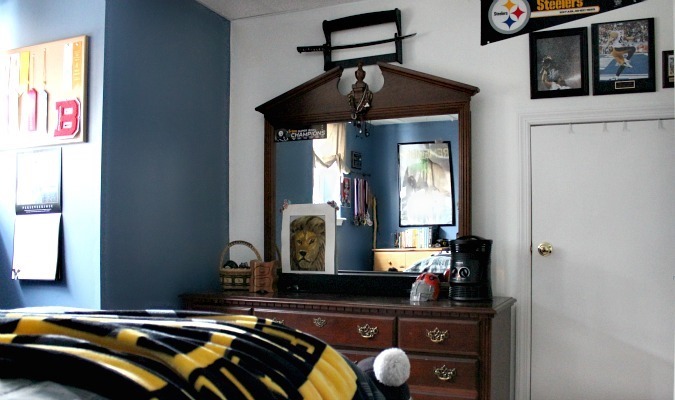 This, I’m sure is his favorite wall in his room, his running wall.  As you can see on the plaque at top, his cross country teams were first runners up in the state this past season.  That is nothing to sneeze at, but they went there with the intention to win, and they came in second by two points, to lose the only meet they had lost to a double AA school all season. It was heartbreaking to them.  I purchased the gold distressed arrow at Target for him to hang all of his medals on display.  The wooden leaf is a JV race that he won freshman year.  The walking stick you see to the far left was made by him at a camp he attended. 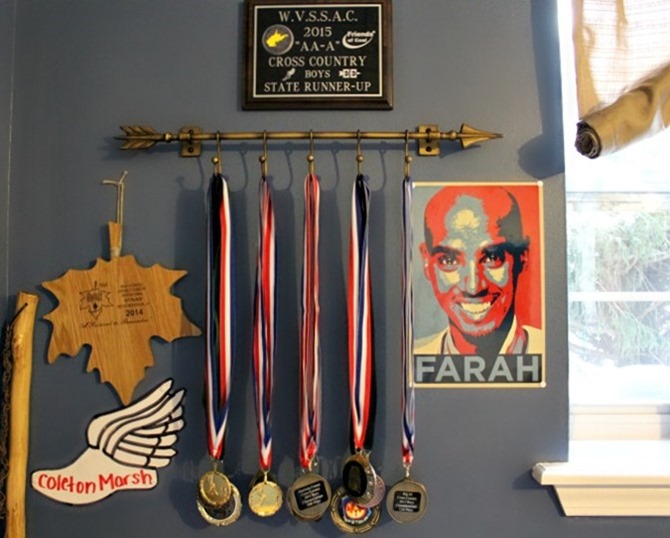 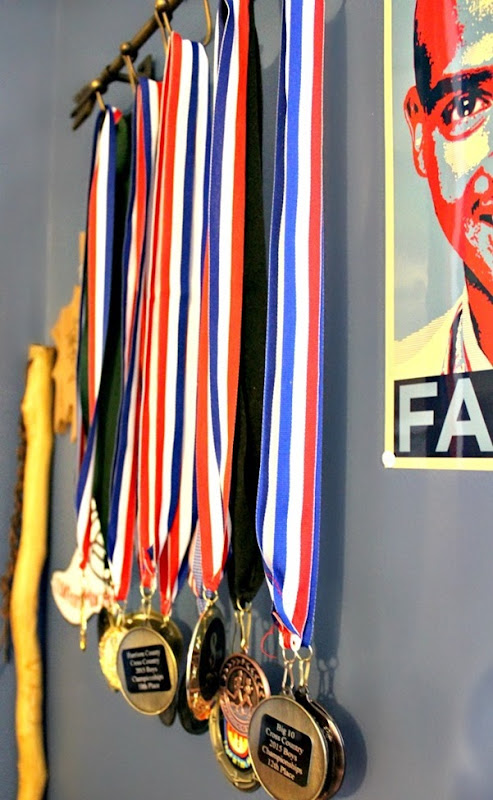 Just in case you have not seen his previous bedroom, here it is.  This room had never been painted when we bought the house, except for the half chalkboard wall.  At the time the yellow matched his Pittsburgh Steeler theme.  Now, although he still have some Steelers stuff in his room, he did not want a themed bedroom.  He wanted a more grown up feeling room, and I think he achieved that.

I am dying to know, what do you think of the transformation?  I am smiling from ear to ear over it. And I must say, although I love Mr. 15 Year Old to pieces, it is a good change to have him a little further away now.  He has more privacy, and so do we.  He can have friends over without them being right across the hallway from us, and that, my friends, is a very good thing!  Plus, the two boys haven’t been arguing and fighting nearly as much, so win win!  Do you prefer the colorful teenage boy room you see above, or the more grown up bedroom that he now has?  It’s funny how our tastes change in just a few short years isn’t it?  Have a great Monday!
Do you have champagne taste and a tiny budget like me?  Love fashion, DIY, crafting, all things vintage and thrifty?  Stick with me, I’ve got you covered!
Sign up to get my posts delivered to your inbox here
Follow me here:
Facebook / Twitter / Instagram / Pinterest / Bloglovin / Google + / Stumbleupon