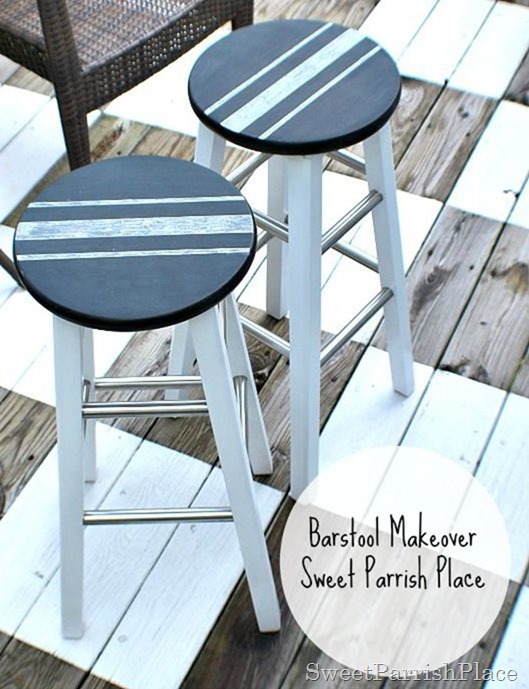 Hey all!  Welcome to Trashtastic Tuesday! This is a little series around here where I show you something that I thrifted, sometimes I make it over, sometimes I don’t.  Or it may be something that I have owned and I am tired of, or no longer like, so I make it over.  But nevertheless, it is usually something that I paid very little money for.  My project for today is a trashtastic bar stool makeover.  They go with my kitchen island, which was in the house when we moved here.  Back in April, I gave the island a phase one makeover by painting it white, and removing some cabinet doors to make open shelving.  At the time, the weather was not cooperating for me to be outside spray painting, so I put off painting these bar stools.  All of June and half of July was rain, rain, rain around here, so I wasn’t able to do much spray painting until we were back from vacation in July, bummer.  But I was finally able to get these bar stools finished, so all is well that ends well! 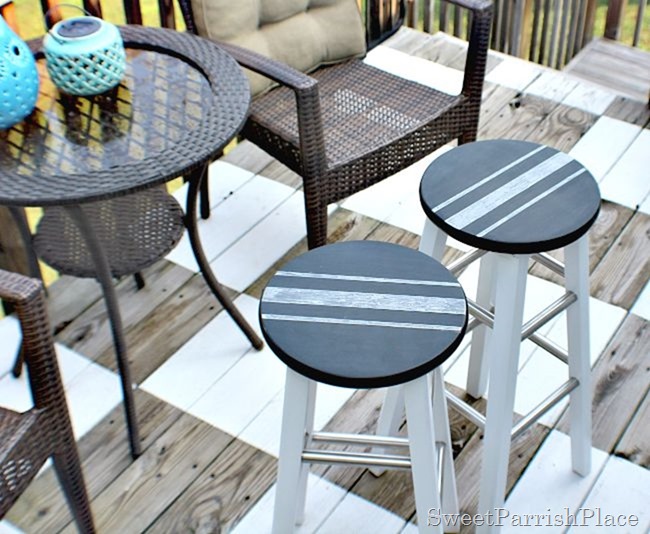 I definitely wanted the rungs of the bar stools to remain stainless steel, so I started by covering them using white printer paper and painters tape.  That was probably the most difficult part of the entire project, it just took a long time.  After I had them all covered, I took them outside to get my spray paint on!  I painted the seats of the stools with black chalkboard spray paint.  I sprayed on three coats, allowing for drying time in between.  After the third coat was dry, I used Walmart bags and painters tape to cover them. 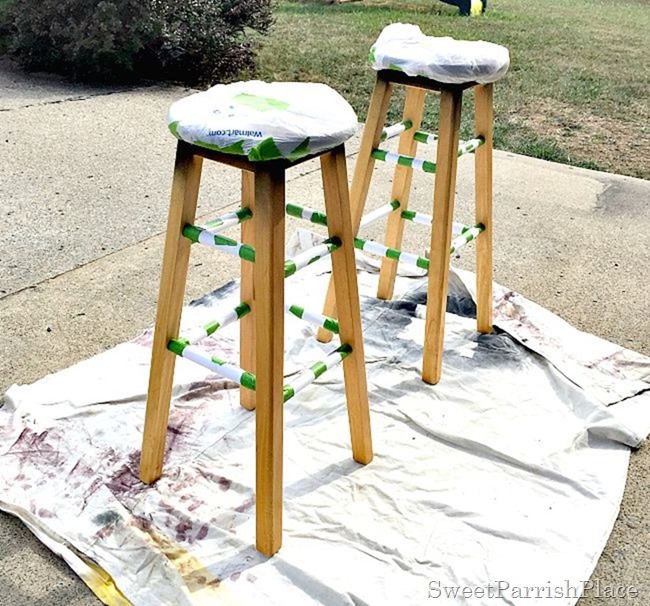 After I had my freshly painted seats covered, it was time to spray paint the rest of the stools.  I chose Rust-Oleum American Accents 2X Ultra Cover spray paint in glossy white.  You can see it in the picture below.  You can also see my nifty little spray painting gadget that completely changed spray painting for me!  No more hurting, sore fingers.  I received this in one of my swag bags when I attended the Haven Conference in July, and it is heaven sent for sure!  I sprayed on three light coats. 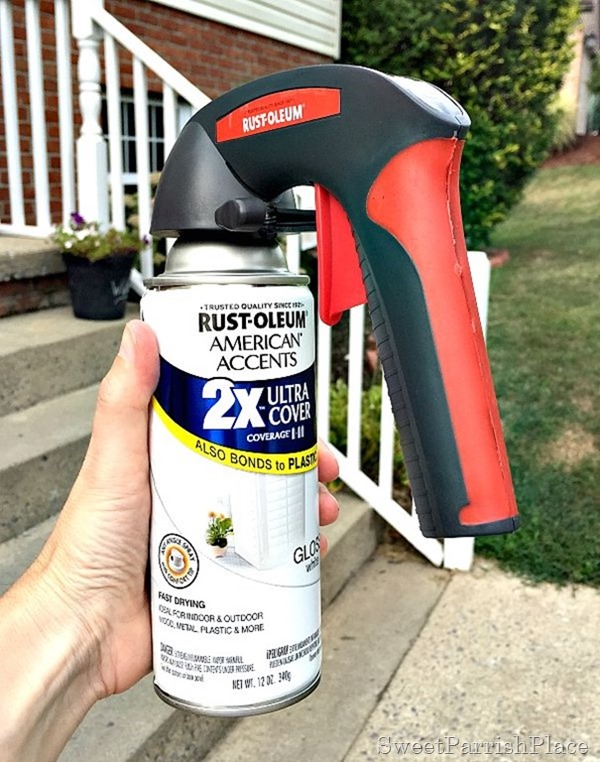 Here they are back in my kitchen!  I am thrilled with how they turned out.  Remember, the seats are black chalkboard paint, so I can change the decoration on the bar stools whenever I want to, which I like the idea of.  This time, I went with a grain sack look. 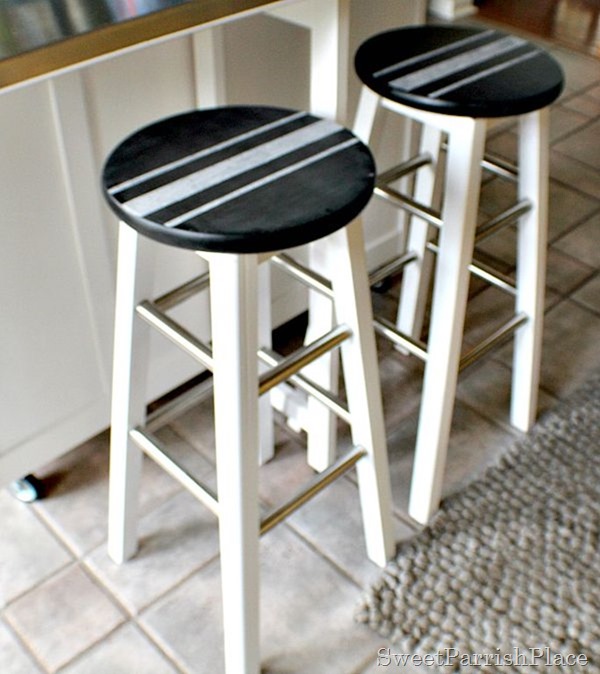 The first thing I did with the seats was to season them by rubbing the side of a piece of chalk all over them, and then wiping them down with a paper towel.  I wiped the chalk almost completely off because I don’t want them coming off on people’s pants.  But it left just enough of a trace that they look seasoned.  I used a chalk marker to do the grain sack look, because it doesn’t wear off unless you wipe it with a wet cloth.  So it will be more durable than chalk. 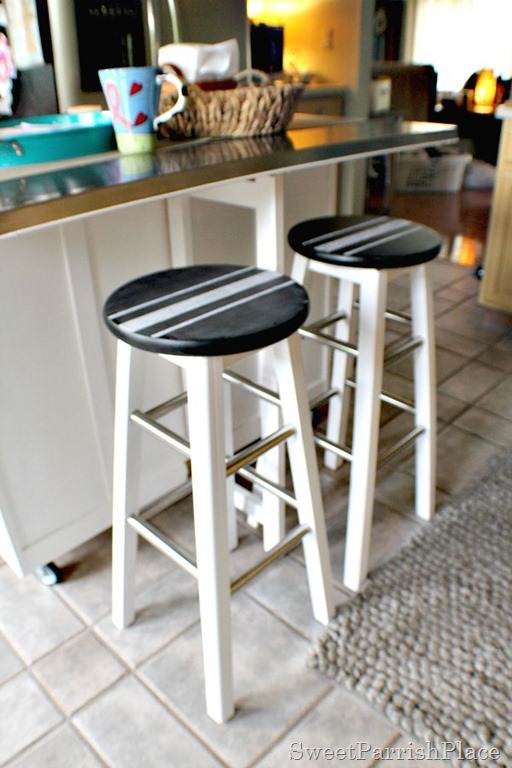 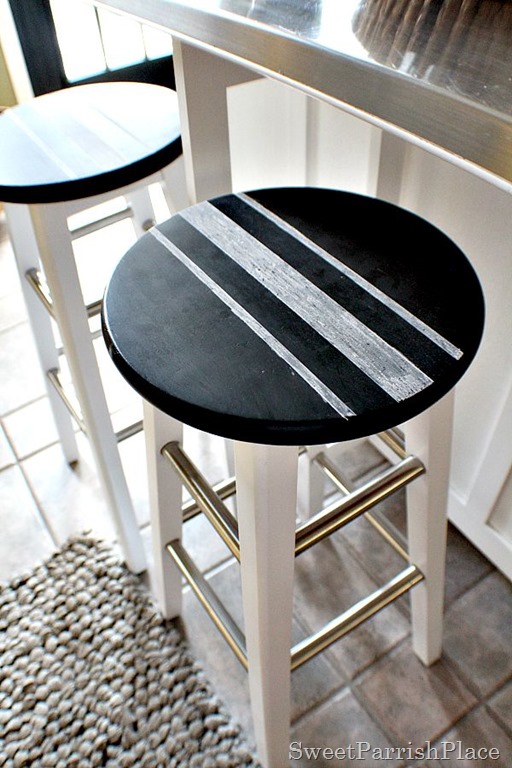 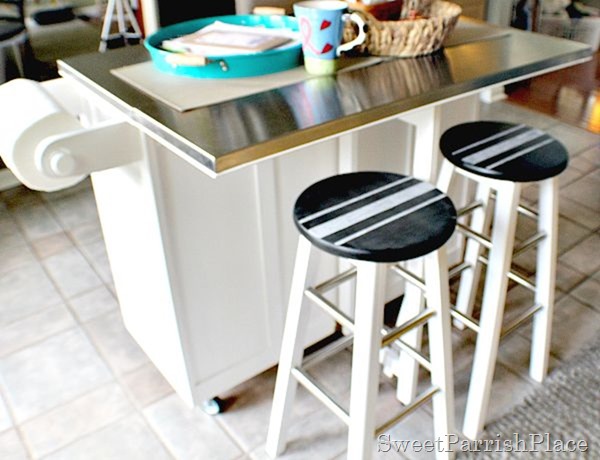 This island is looking so much better now with matching bar stools!  The island and stools were originally just a natural wood look.  It is much improved, but I am still not finished with it.  Soon, I will be adding chunky island legs to it.  This island folds out, or you can fold it down to make it more narrow.  I never, ever fold it down, so I have decided to make it permanently folded out using legs. 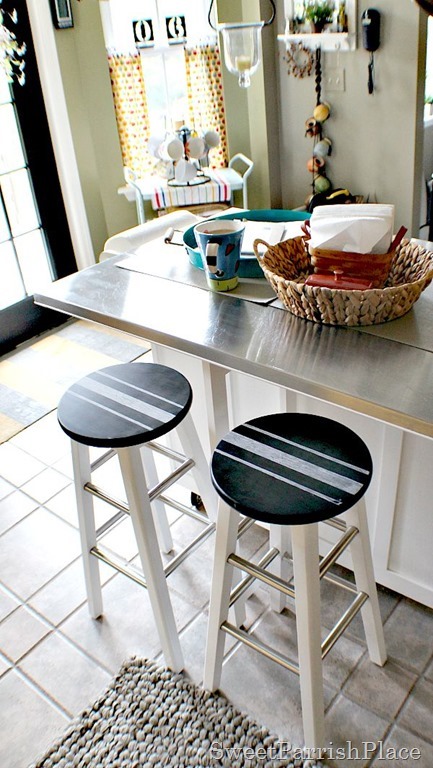 If you look at the picture below, you can see a middle section that holds the fold out part of this island out.  This can be folded in, and there is a leaf that then folds down.  You can see the seam on the stainless steel top.  I plan to remove the center part that folds out and holds up the extension, and add chunky legs to the right and left corners of this island.  Then the bar stools will sit in between the island legs.  I already have the legs, they just need painted and attached! 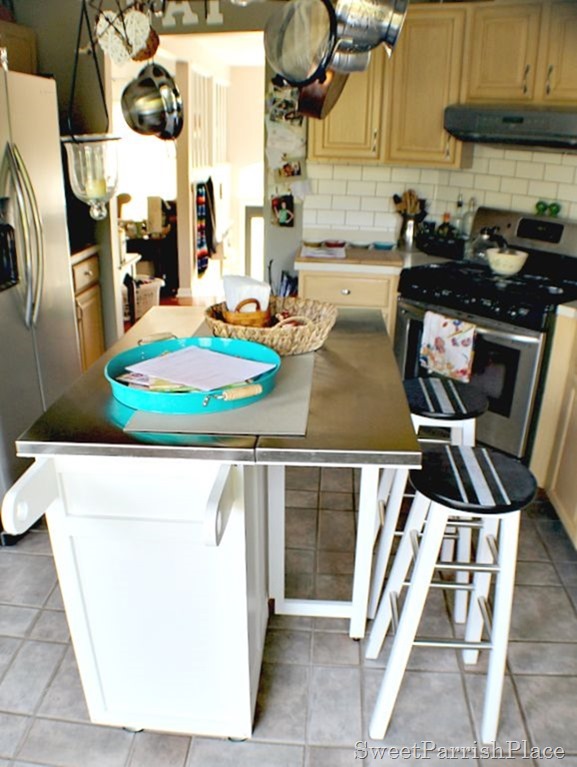 I don’t think I have shown them on the blog, but I did purchase new rugs for the kitchen back in June.  They are grey and bubbly looking, and I really like them a lot! 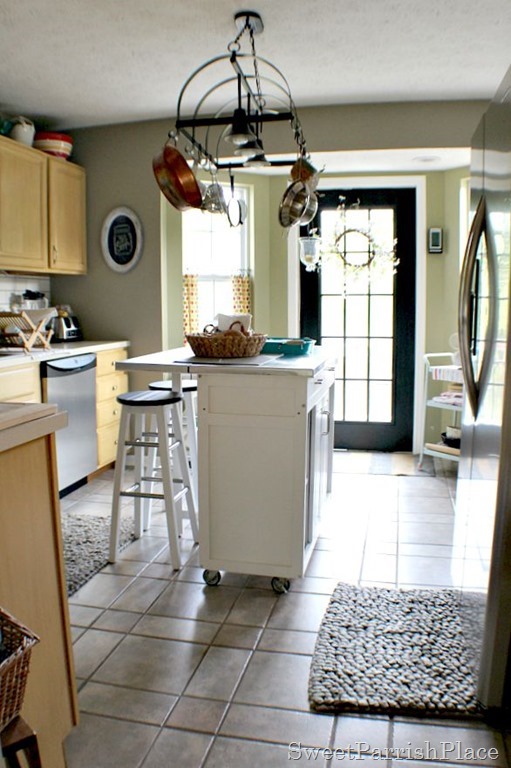 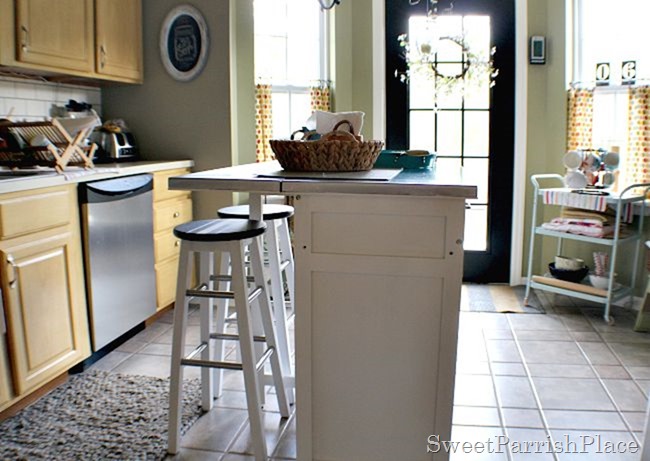 After the island legs are finished being installed, I also plan to change the top of this island to a wood top.  The stainless steel is such a pain!  It scratches so easily, and it never stays clean.  I think a wood top will look great on the island, and it will work much better for our family.  What do you think of the idea?  I would love to hear your opinion in the comments! 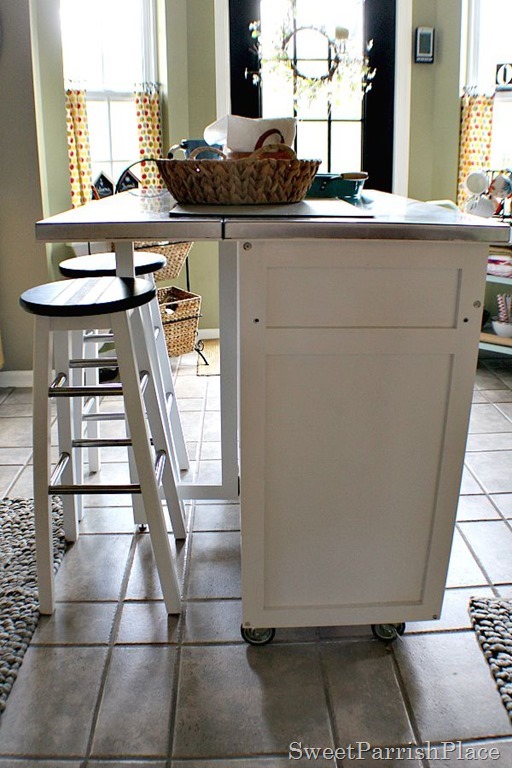 I purchased the turquoise tray at Walmart on clearance for super cheap a month or so ago, and right now it sits on the island as a catch-all for mail that come in the house.  That is a never ending battle, is it not?  One more little touch that I also finished on the island is the spindle that holds the roll of paper towels.  I had not painted it yet either, so it got a few coats of white chalk paint as well.  Why chalk paint, you ask?  Well, I planned to spray paint it when I painted the bar stools, and I ran out of spray paint.  I had white chalk paint sitting in my kitchen from the chalk painted pitcher I had painted for my last Trashtastic Tuesday post.  So I just decided on a whim to use it to paint this spindle.  It took three coats, and then I waxed it with clear wax, and you really can’t even tell a difference in any of the whites! 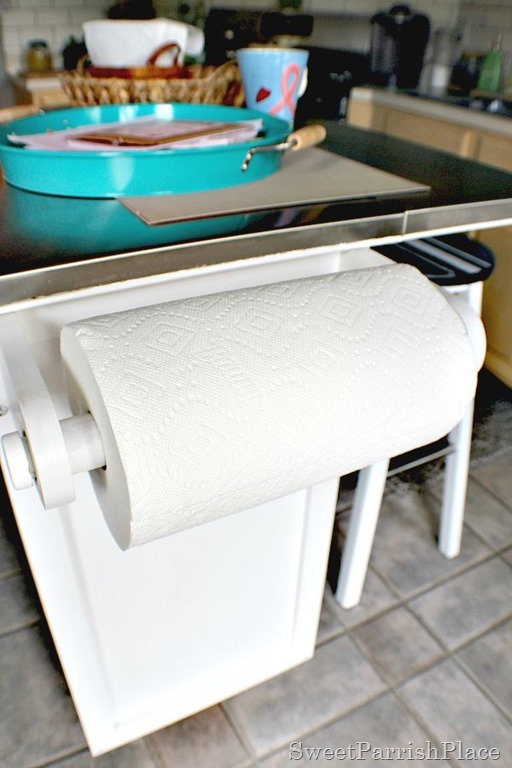 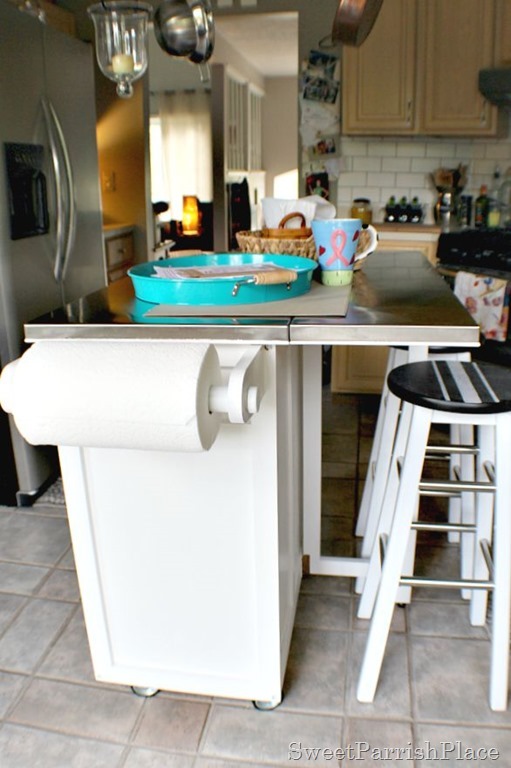 After the island is finished, there won’t really be much more to do in this kitchen.  Well, I would like to do something about the counters, but no official plans yet.  We also need a new door leading out to our deck, not sure if the one we have will survive another winter. 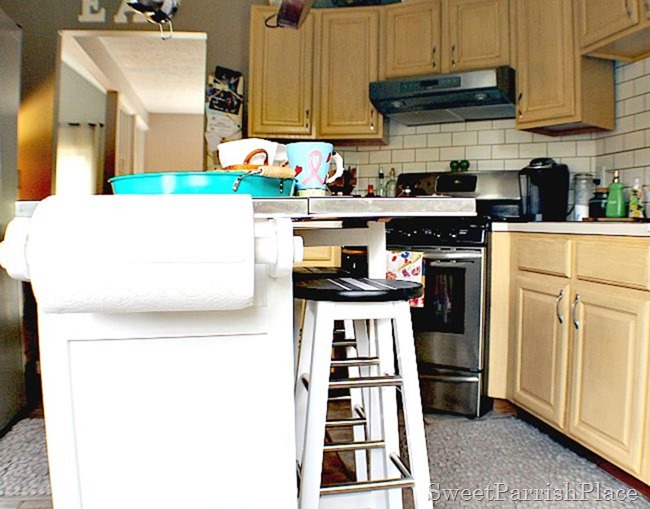 Here is another view of the island, but you can see the whole post about the painted island by clicking here.  The counter behind the island is really not styled for blog pictures right now.  I don’t always keep our smoothie maker sitting out, but we happened to have made smoothies recently and I hadn’t put it away yet.  Also, I usually remove the bamboo dish drainer for pictures, but just didn’t have the energy on that particular day.  But in the spirit of keeping it real, the bamboo drainer is always out, except when we are having company or taking pictures, so that is how it usually looks.  I have never understood how people live without dish drainers.  Not everything can be washed in the dishwasher, and where do those people put there dished?  Do they just dry them and immediately put them away?  If so, they are better than I am for sure. 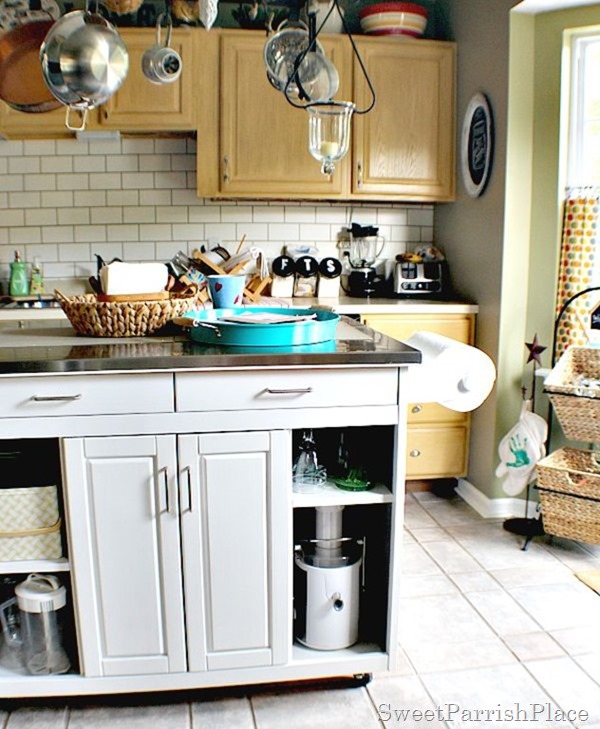 Thanks for joining me at Trashtastic Tuesday today!  If you like today’s post, please feel free to check out all of my other Trashtastic Tuesday projects.  Have a great Tuesday!
Do you have champagne taste and a tiny budget like me?  Love fashion, DIY, crafting, all things vintage and thrifty?  Stick with me, I’ve got you covered!
Sign up to get my posts delivered to your inbox here
Follow me here:
Facebook / Twitter / Instagram / Pinterest / Bloglovin / Google + / Stumbleupon