My dining room/office is sporting something new!  Well, new to me!  And they are truly trashtastic!  Check them out! 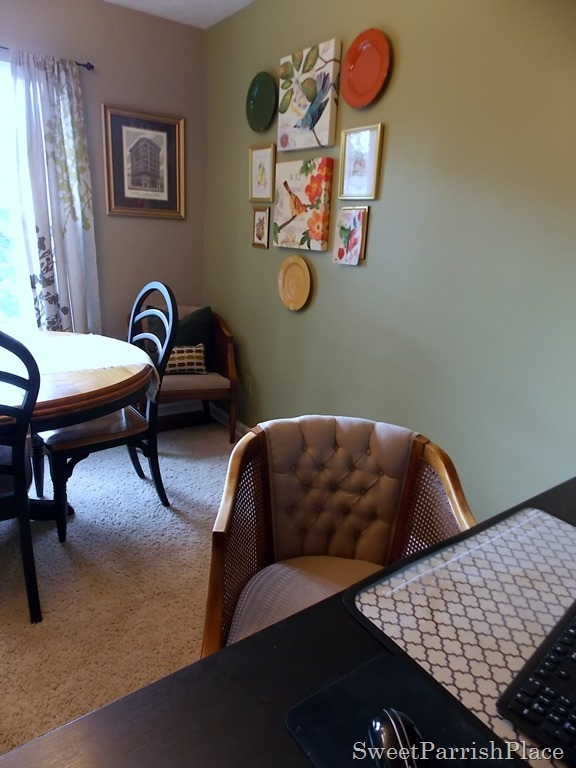 I scored big time at Goodwill this past Friday.  I decided to make a quick stop there on my way home from work.  And what did I find, but a set of fabulous cane back barrel chairs for $5 each!  But they looked pretty shoddy.  One of the seat cushions is loose and  the upholstery was filthy.  There were dead bugs in around the cushion.  I stood there for about :30 seconds debating.  The frame was sturdy, no issues there.  I have never tried to reupholster anything except some kitchen chair years ago.  The upholstery on the back looked like something that I would have no idea how to do on my own.  But I decided to take my chance and get them.  I mean, $5 a piece people!  What did I have to lose?  I have been on the lookout for a set of chairs for our dining room/office.  I need one for my desk, and I wanted one to just sit in a corner because we only have 4 chairs, which isn’t even enough for the whole family to sit at once.  Over the winter I was using two of my outdoor chairs in there, but they are back outside now.

So, I decided to try to give these sucker’s a little love and see how it works out.  I went home and pinned a whole bunch of similar chairs, and how people made them over to my DIY board, and researching other blogs.  After that, I began making my plan of attack.  I remembered a tutorial from Young House Love about how to freshen up old furniture, so decided to use John and Sherri’s tutorial.  You can click on the link for their full tutorial, but basically, what I did was to use a magic eraser to wipe down all of the wood, and then I wiped it down again with a rag soaked in vinegar.  The magic eraser is supposed to serve as a mild sanding, and the vinegar is to get the old musty smell out.  It worked like a charm.  BTW, I always go to YHL’s project page first when I am looking for a tutorial on how to do something myself.  They have the best catalog of tutorials around.

To clean the upholstery, I bought a bottle of resolve upholstery cleaner.  It said on the bottle it would clean and refresh.  I had serious doubts about whether the upholstery would come clean.  First I vacuumed away all of the dead buggy particles, then I sprayed the chair down.  Then I just started scrubbing with a damp rag.  And believe it or not, they came clean, spotless as a matter of fact!  I may end up reupholstering them someday down the line, but that is way at the bottom of my list of things to do around here.  They are such a neutral color that I think they are fine.  I thought of putting a graphic on the seat cushion or something. We shall see.

In the process of cleaning the upholstery 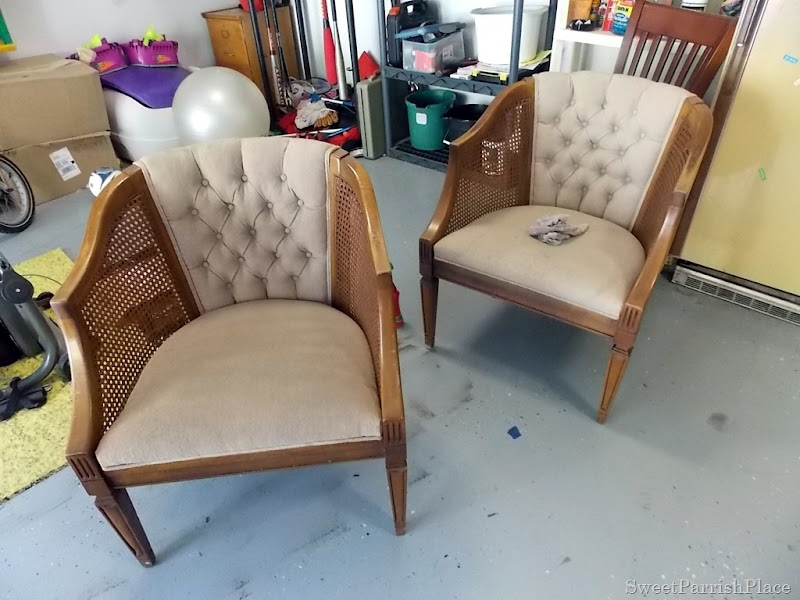 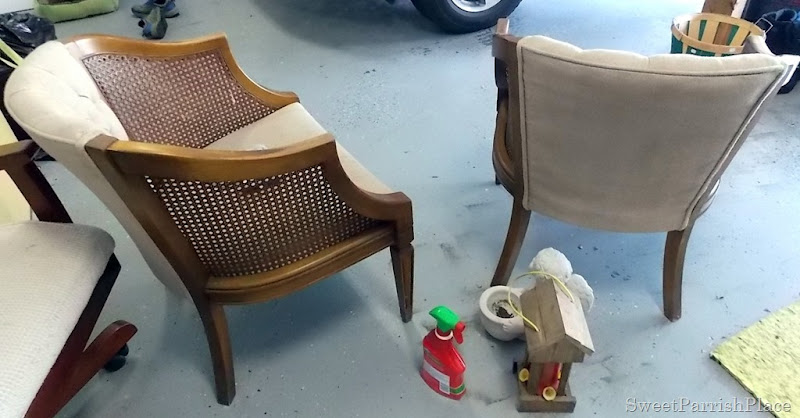 After cleaning upholstery, wiping down with the magic eraser, and the vinegar.The arms of the chairs had a sticky, gunky buildup.  The magic eraser easily removed all of that, but left parts of the chair looking almost bleached out. 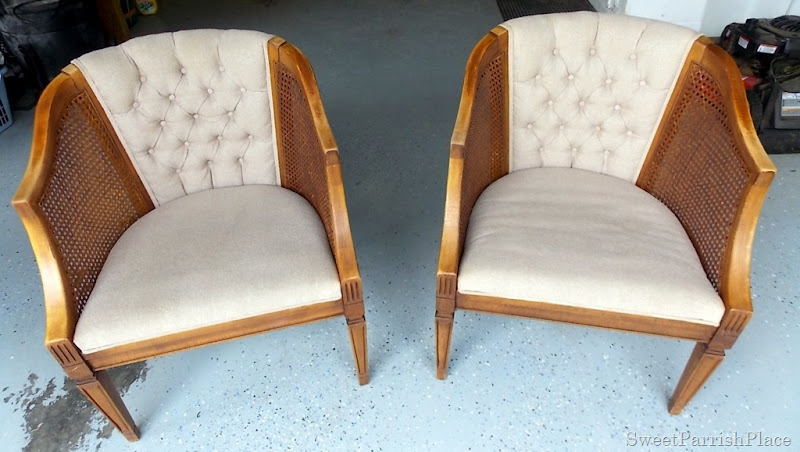 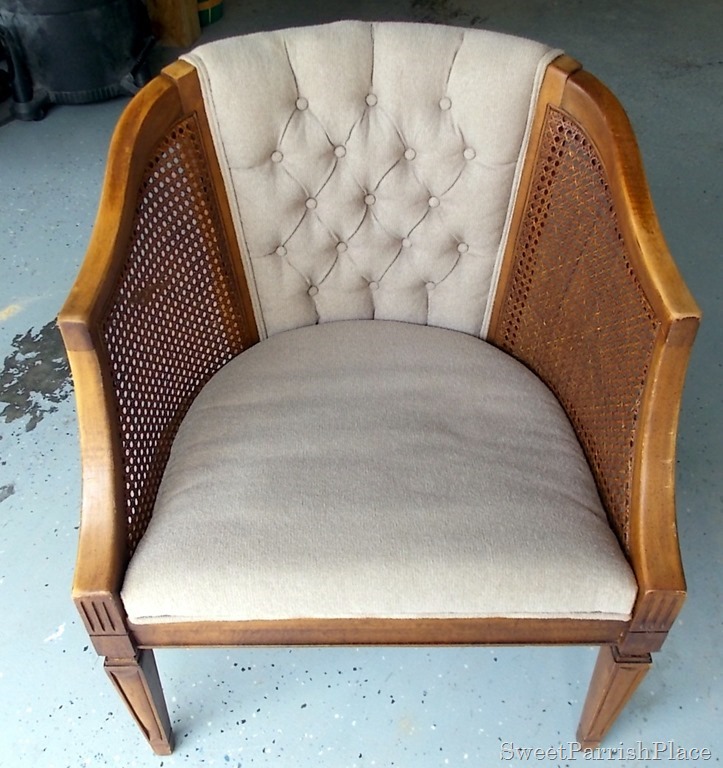 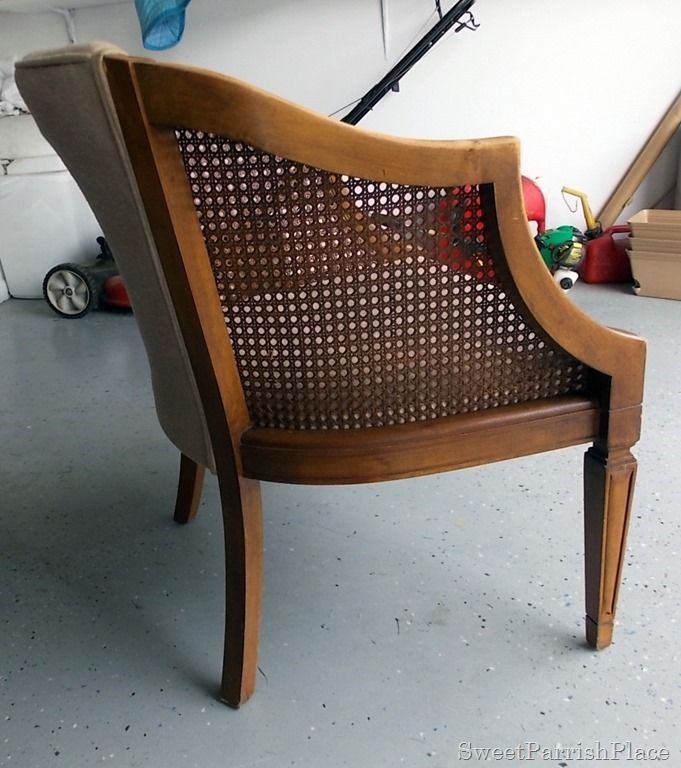 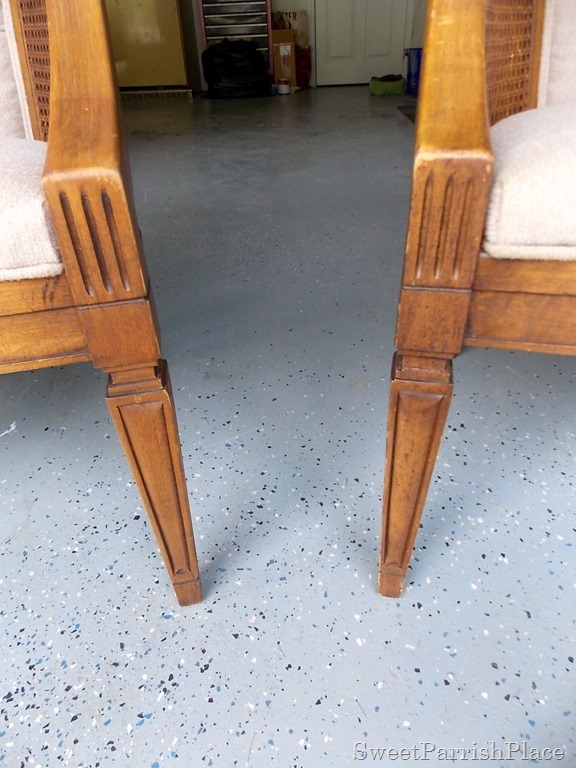 A close up of the upholstery after it had been cleaned. 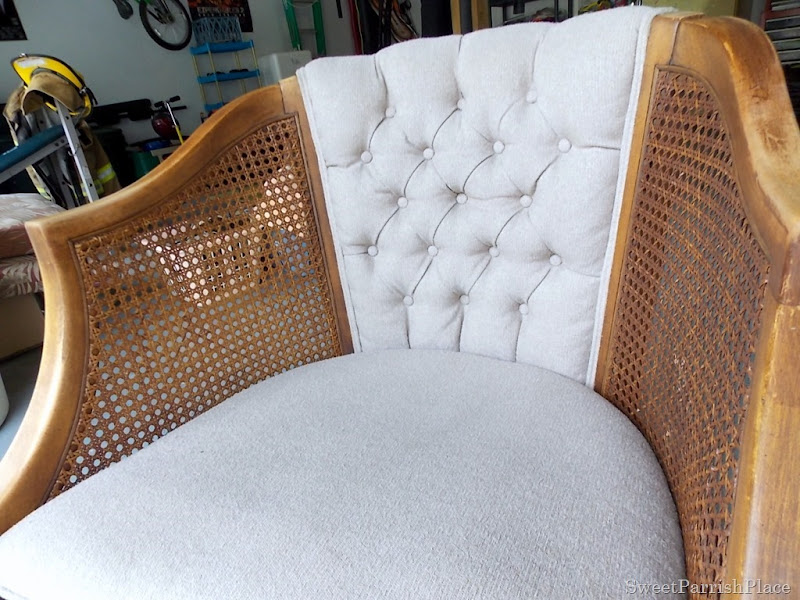 After that I brought them upstairs to try them out. 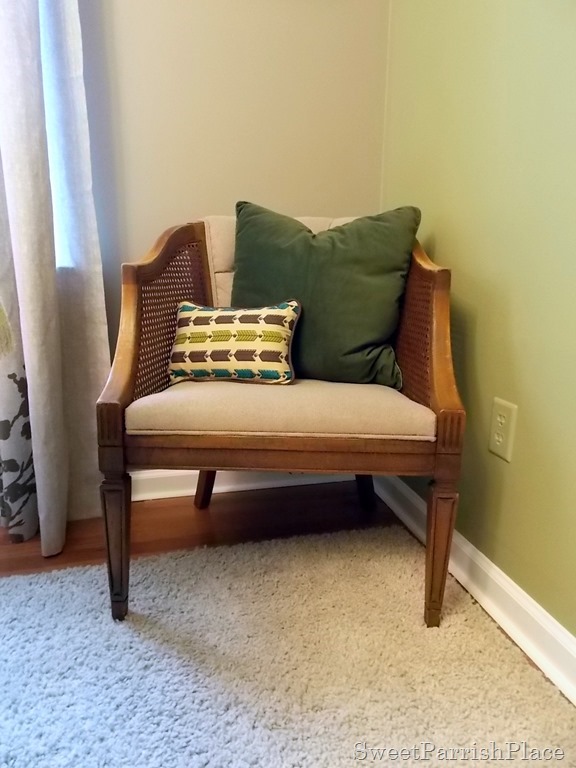 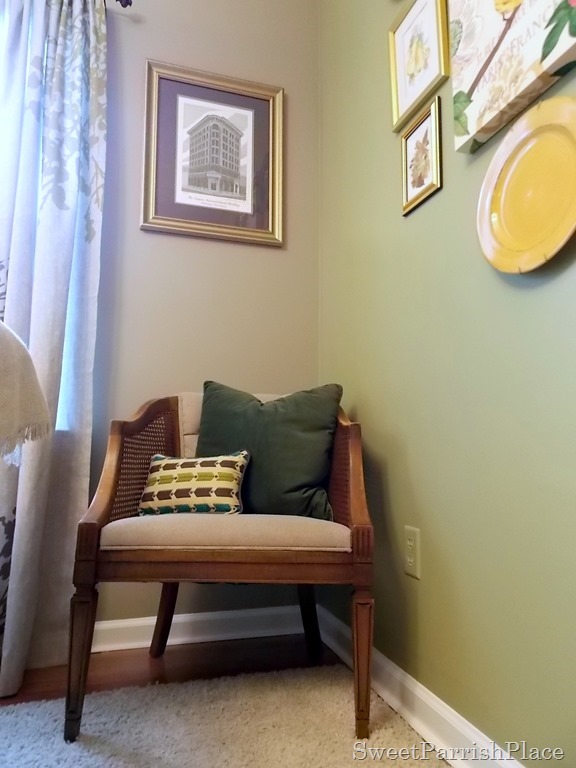 Take note of the almost bleached look of the arms of the chair.  This was also after magic eraser and vinegar. 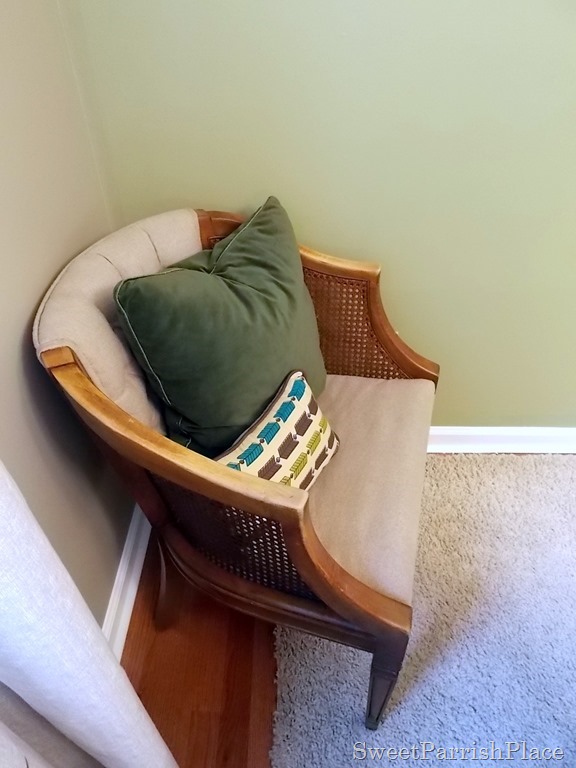 I decided to try wiping the wood down with coconut oil and a soft rag.  I have read somewhere at how much better it makes the wood look.  The below pictures are all taken after the coconut oil. 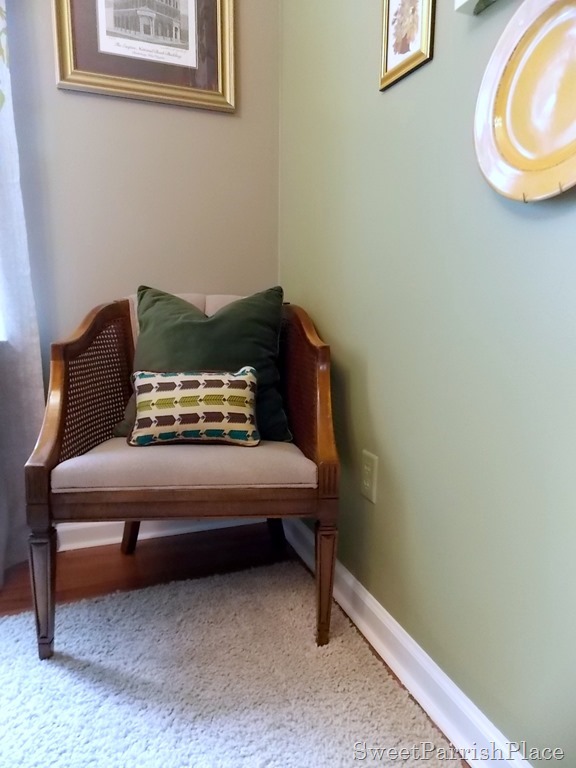 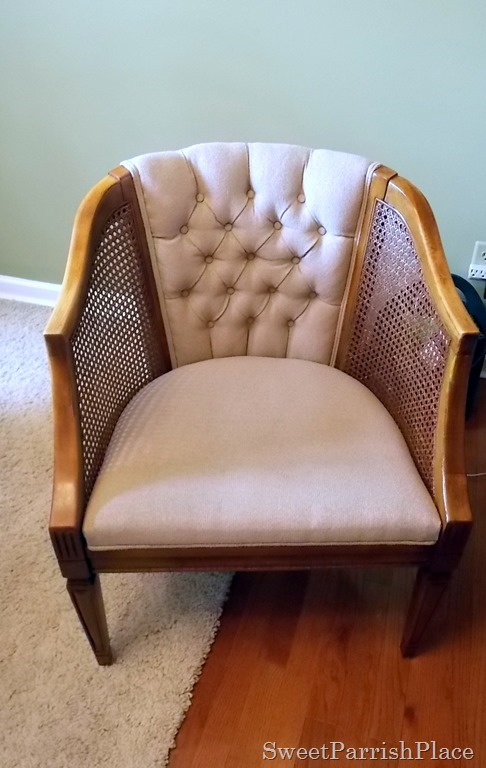 I decided to play magical chairs and see what they looked like at the ends of the table instead.  But you couldn’t push them in all the way, so that idea was out. 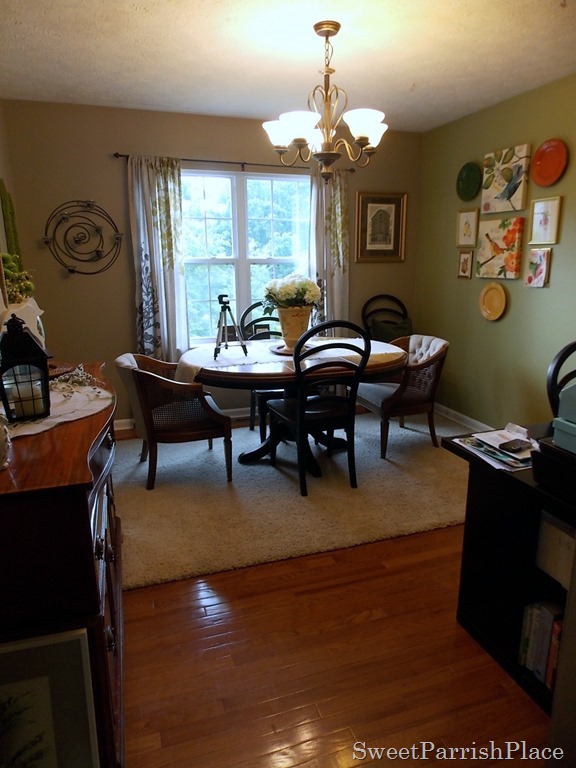 My kids would have these chairs banged up in two seconds with the way the arms hit right under that table. 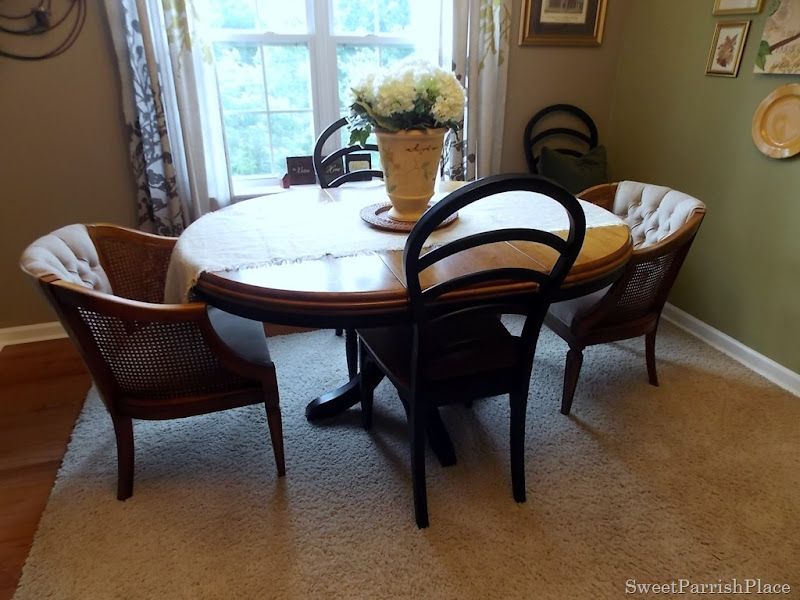 So this is the arrangement I decided on. 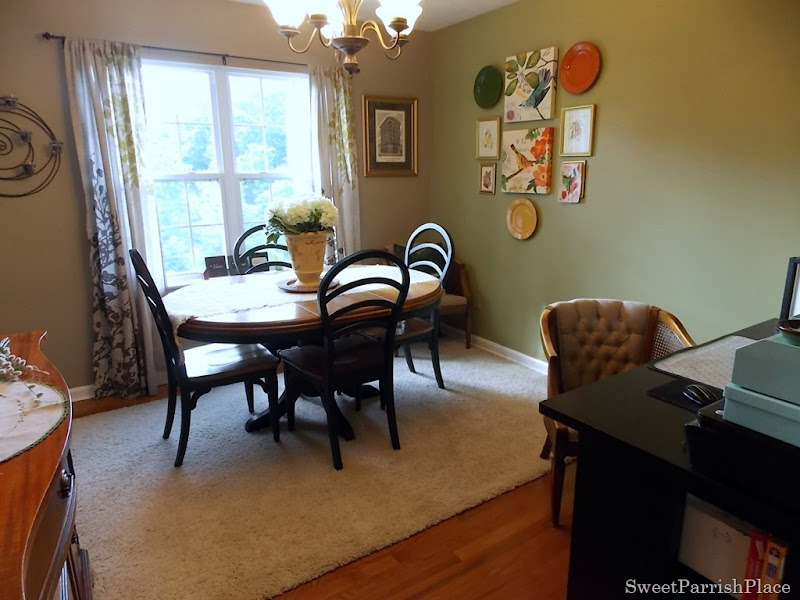 The chairs are quite comfortable, but a little too low.  But they are staying here for now, so I just place a pillow underneath me when I am working at the desk. 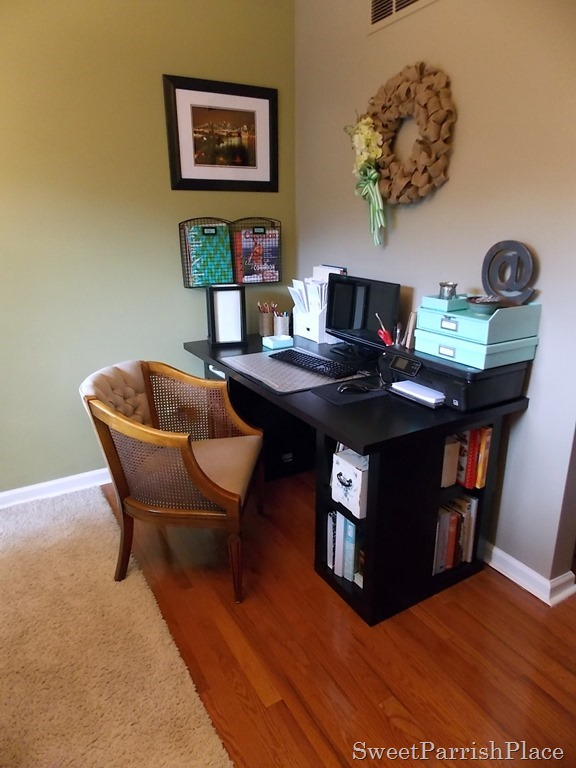 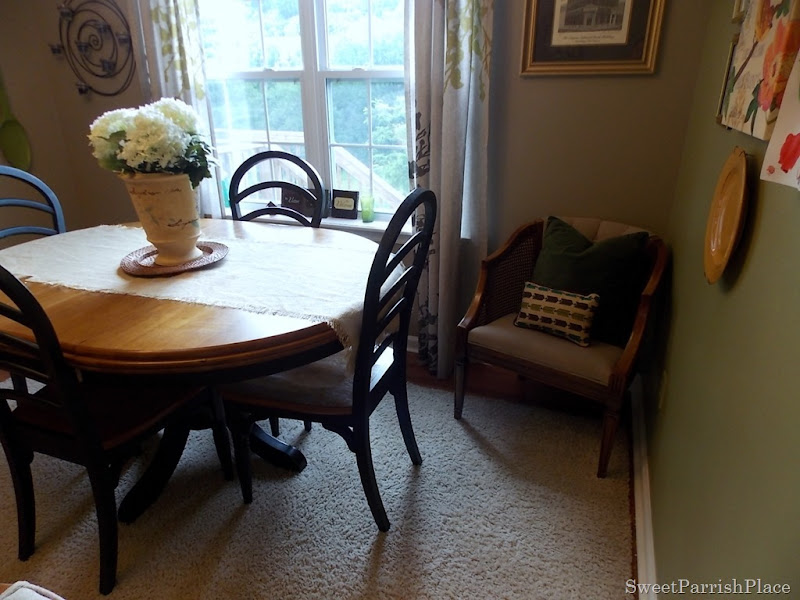 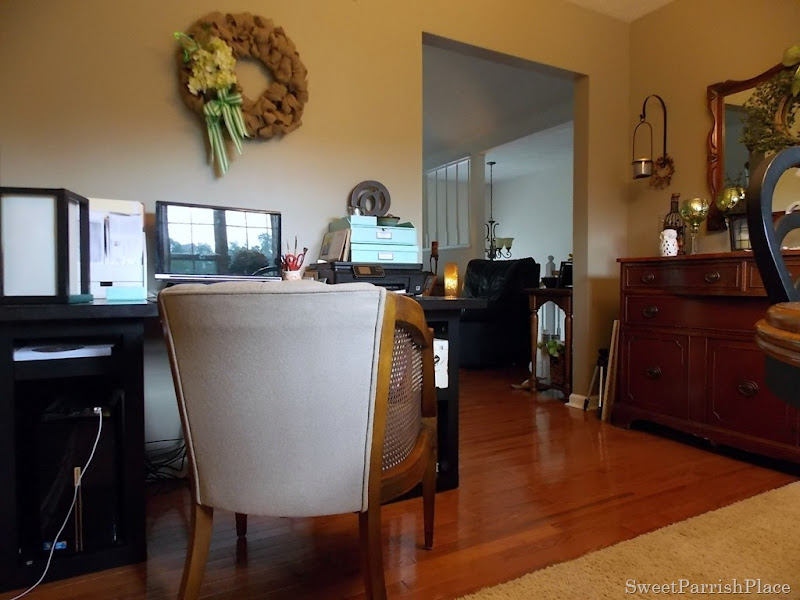 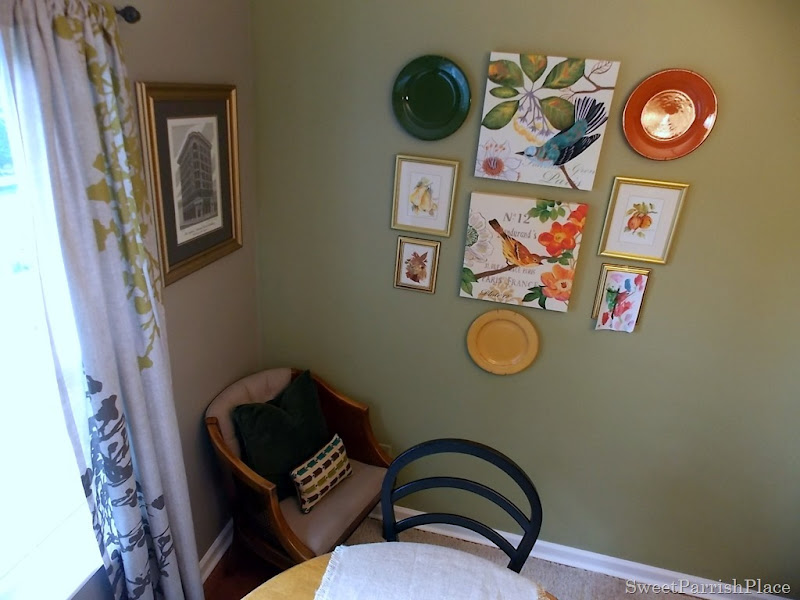 I decided to add my grandmother’s prayer blanket to the chair.  See the little cross hanging down? 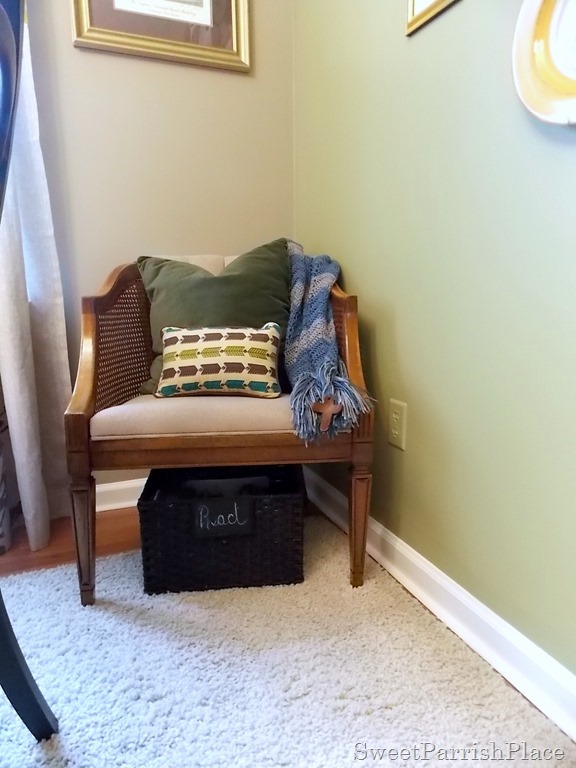 Look at the far right of this picture below.  In case you have not noticed, Mr. 5 year old taped his own artwork up over one of the picture frames.  I will leave it there for a while.  He thinks it is so beautiful! 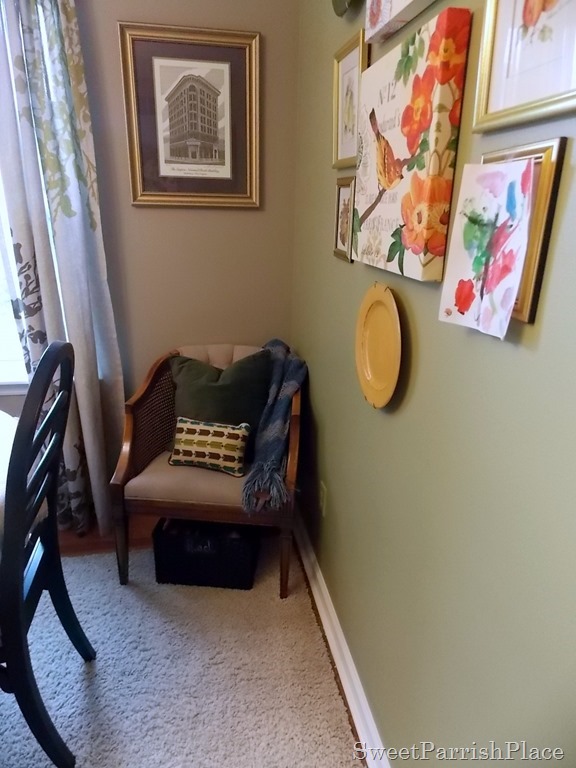 So for now, the chairs will stay as is.  I cleaned them up as best I could.  And the vinegar really did make the musty old smell disappear!  But I do have plans to paint the wood on these chairs a fun color.  I am thinking a light blue, and distressing the finish on them.  I might even try my hand at making my own chalk paint for this project.  Who knows when I will get to it, but I am adding these chairs to my long list!
What do you think of the chairs?  What color do you think they would look good painted?  What do you think of putting a french looking graphic design on the seat cushions?  I would love some input!
See you next week for another Trashtastic Tuesday!  If you would like to see all of my Trashtastic projects, click here.I am linking up here: