Welcome to another Trashtastic Tuesday!  I have a good one today!  I am including it because it is made from a cereal box.  that is trash, right?  At least in our house that is where it ends up most of the time!  And we eat a lot of cereal around here!  Last week,  I spiffed up a couple of soup cans with jute.  I love the way they turned out, and they were even featured on two different blogs!

Over the weekend, we had to make a Valentine Holder out of a cereal box for Mr. 5 Year Old, and we also had to do his Valentines cards.  His teacher specifically requested that we use a cereal box.  So, on Sunday afternoon, I worked on the box, LC worked on the Valentines, and Mr. 5 year old went back and forth between the two of us.

The first thing I did was start looking around on Google for ideas for our cereal box, and I found this super cute little owl.  There is a link below the picture to the actual source that has directions for how to make one of your own.  However I did  not use them, I just printed out the picture and used it as a guide.

Plaidonline.com
I used a cereal box we already had, and went to Target for the rest of my supplies.  Here is a picture of everything, except for the Elmer’s glue and the scotch tape I used.  Pardon the mess on the dining table, we were working on a cereal box, Valentines, and some of Mr. 12 Year Old’s homework is spread out there too.  ( I accidentally threw it away when I was cleaning up after, but we picked it out unscathed, whew!)
I used red wrapping paper, some craft paper, scissors, washi tape, scotch tape and googly eyes. 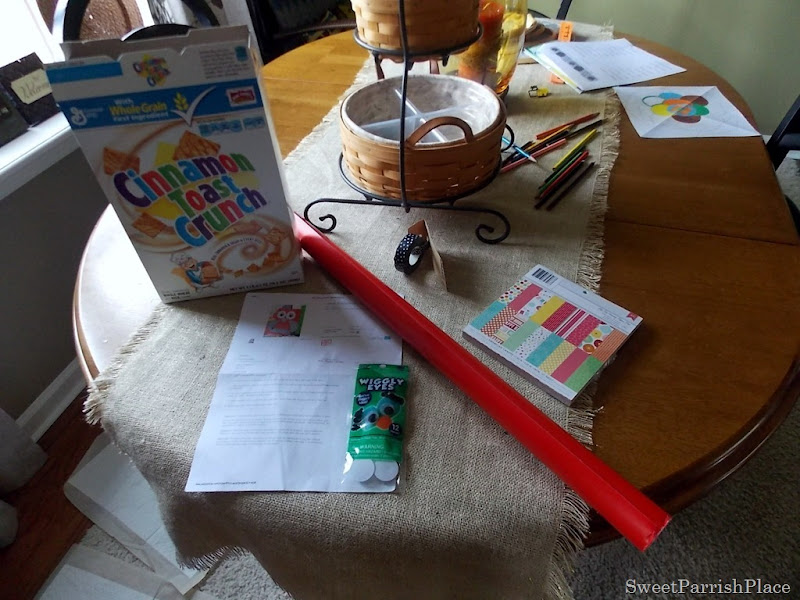 This is the box wrapped in red paper.   I cut off the top tabs from the box.   I just wrapped it like a gift and tucked it around the top with tape. 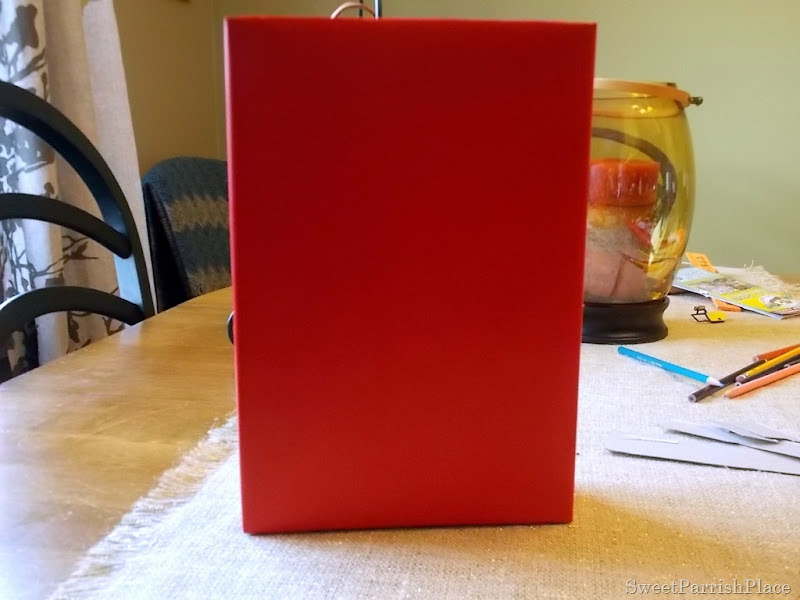 I used a glass to trace 2 circles onto white paper for the eyes.  Then I took a drink of the diet Pepsi behind the box, ha!  Oh, say hi to LC in the background! 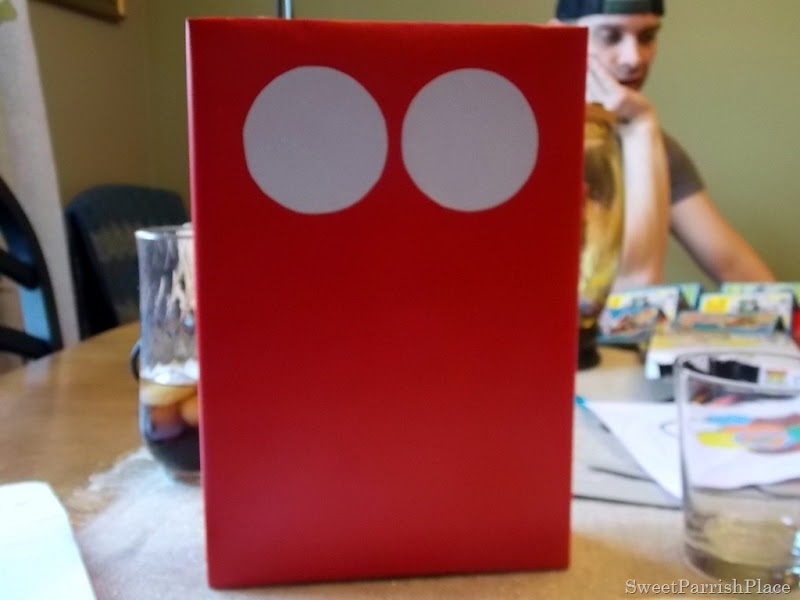 I used the polka dotted paper for the next layer on the eyes and the heart shaped nose.  I glued everything on with Elmer’s Glue. 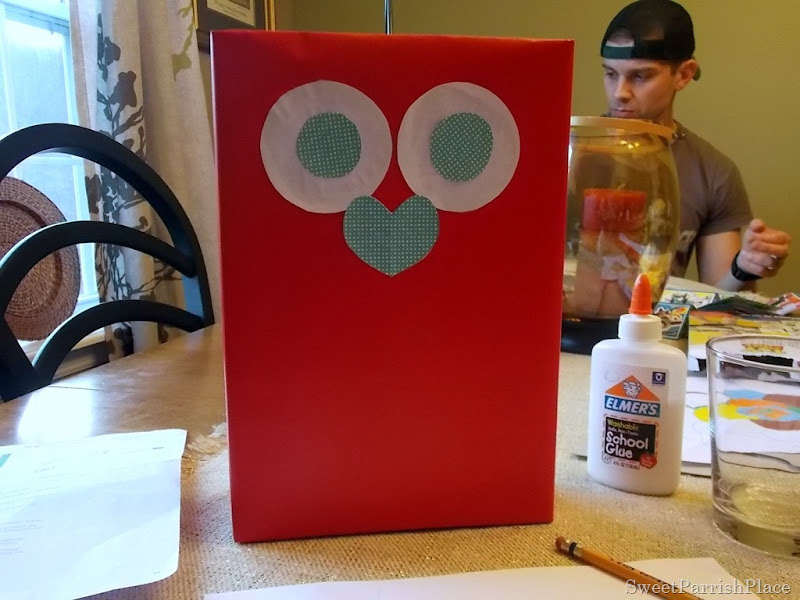 Then I just cut a few stripes of colorful paper to put across the bottom of the box. 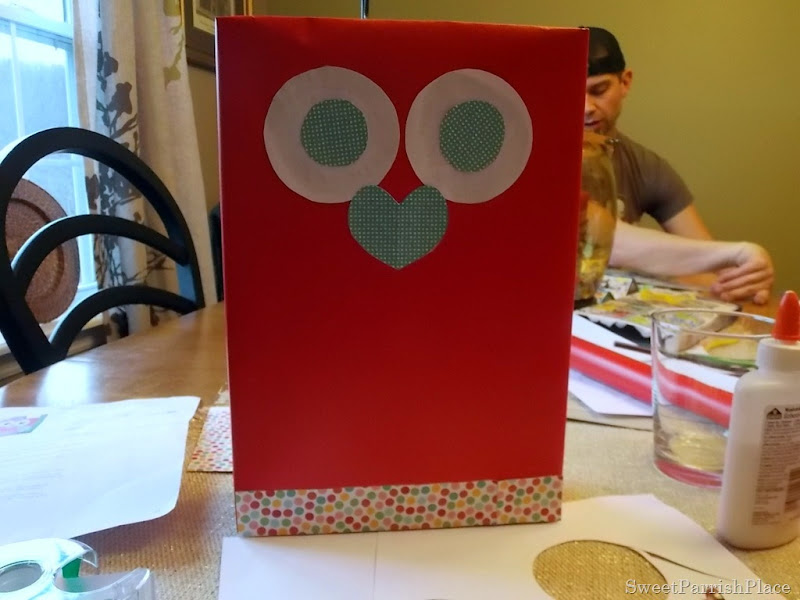 Look at LC back there hard at work on his Valentines!  I wonder who gets the best one? 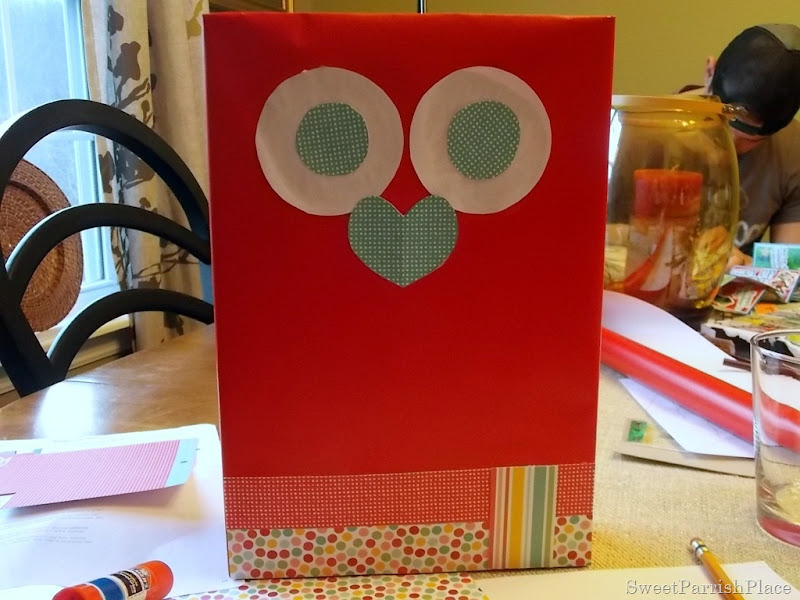 Then I used a bowl to trace a larger circle to make the wings.  I think in retrospect I should have made them bigger like my inspiration picture, but to be honest, at the time I just did not care that they were too small! 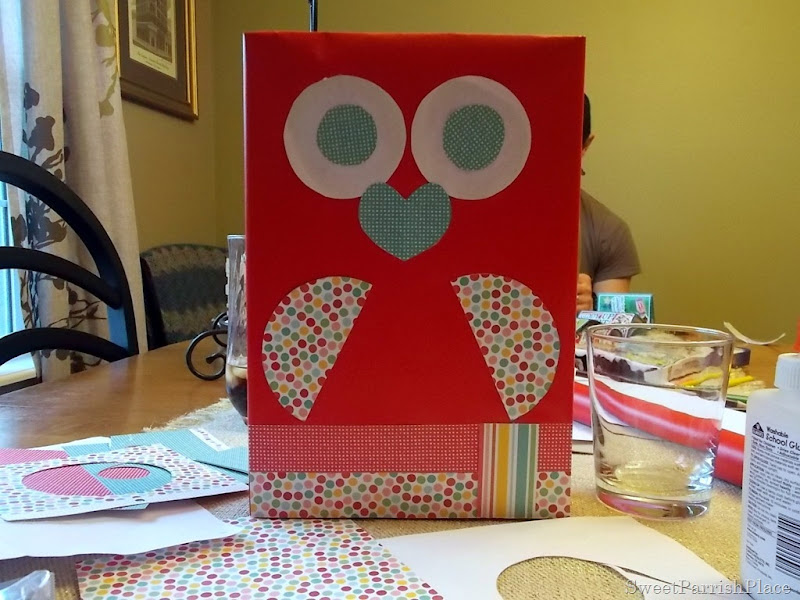 Next, I made a little bow tie by cutting two triangles and snipping off the ends with scissors, and glued on my googly eyes.  That was Mr. 5 Year Old’s favorite part. 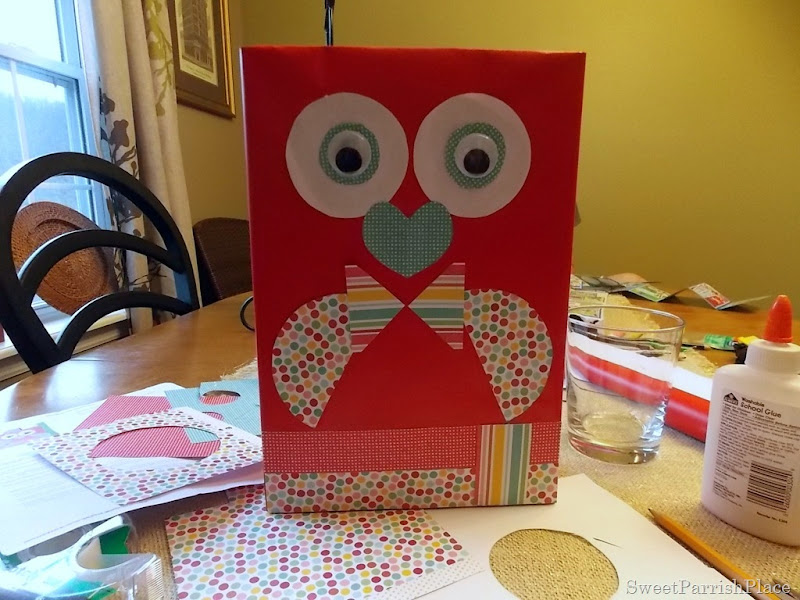 Lastly, I placed a piece of washi tape across the top of the box to give him some bangs.  What do you think?  I think he is super cute!  Mr 5 Year Old was happy with him and that is all that matters.  He took him to school yesterday and his teacher was very impressed at his cutting and gluing skills!  ;)) 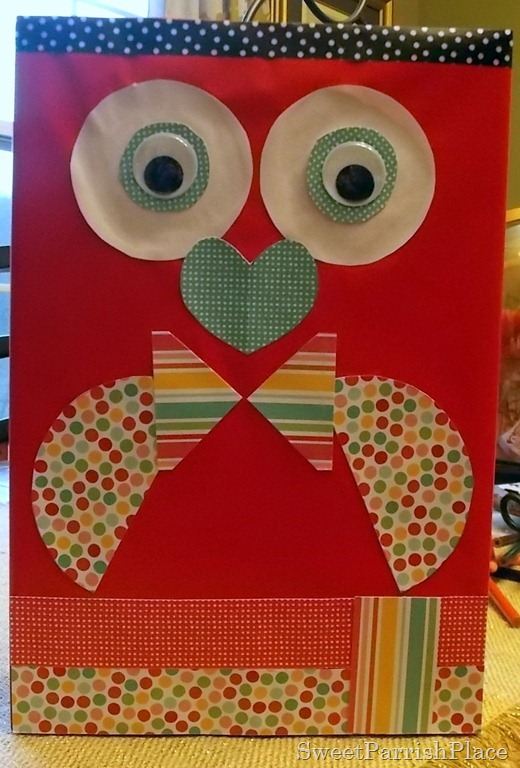 I think it is totally Trashtastic!
Here is my precious boy trying to sign his Valentines.  He quickly lost interest in that and Daddy finished them.

I hope you enjoyed this week’s version of Trashtastic Tuesday!  I will be back next week with a Goodwill transformation!
Do you have to help your child make a Valentine holder?  How many of you end up doing it yourself?  And how about Valentines?  Do you buy them or make them by hand?  And do you put additional treats in with them?  It seems to me that it becoming much more involved than it used to be.  With my older kids I just bought them and we signed them and that was it.  Now, it seems to me that there is always a treat or a pencil or something with it.  I bought cute little Valentines pencils to tape onto Mr. 5 Year Olds Valentines.  Didn’t want him to be the only child without a little something extra, but truly I think it is all just a little over the top.  That is just my opinion, but I do it because I feel compelled to do it.  Oh well, it’s all for the children, right?